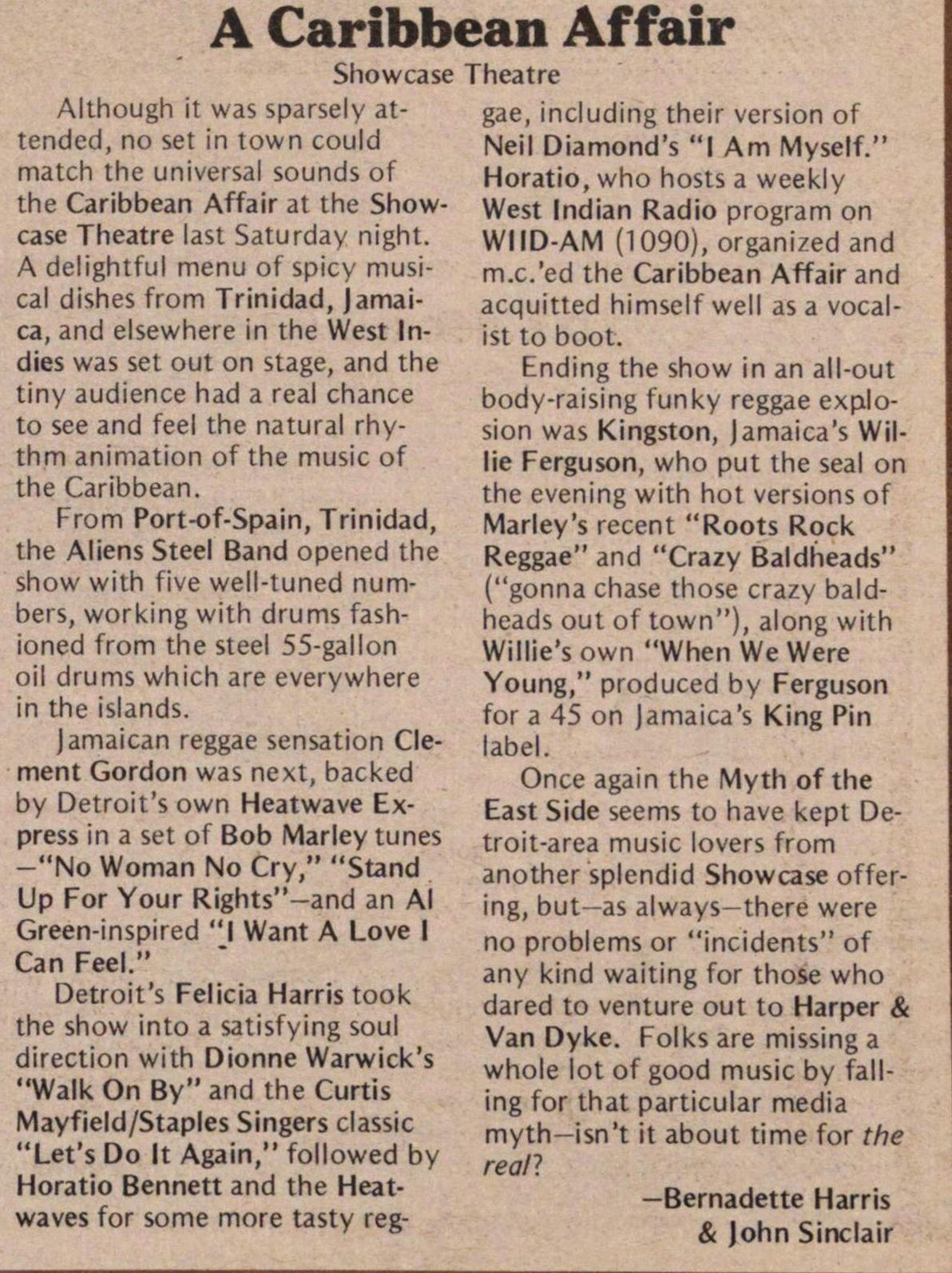 Although t was sparsely attended, no set n town could match the universal sounds of the Caribbean Affair at the Showcase Theatre last Saturday night. A delightful menu of spicy musical dishes from Trinidad, jamaica, and elsewhere in the West Indies was set out on stage, and the tiny audience had a real chance to see and feel the natural rhythm animation of the music of the Caribbean. From Port-of-Spain, Trinidad, the Aliens Steel Band opened the show with five well-tuned numbers, working with drums fashioned from the steel 55-gallon oil drums which are everywhere in the islands. Jamaican reggae sensation Clement Gordon was next, backed by Detroit's own Heatwave Express n a set of Bob Marley tunes -"No Woman No Cry," "Stand Up For Your Rights"- and an Al Green-inspired "I Want A Love I Can Feel." Detroit's Felicia Harris took the show into a satisfying soul direction with Dionne Warwick's "Walk On By" and the Curtís MayfieldStaples Singers classic "Let's Do It Again," followed by Horatio Bennett and the Heatwaves for some more tasty gae, including their version of Neil Diamond's "I Am Myself." Horatio, who hosts a weekly West Indian Radio program on WIID-AM (1090), organized and m.c.'ed the Caribbean Affair and acquitted himself well as a vocalist to boot. Ending the show in an all-out body-raising funky reggae explosión was Kingston, Jamaica 's Willie Ferguson, who put the seal on the evening with hot versions of Marley's recent "Roots Rock Reggae" and "Crazy Baldheads" ("gonna chase those crazy baldheads out of town"), along with Willie's own "When We Were Young," produced by Ferguson for a 45 on Jamaica 's King Pin label. Once again the Myth of the East Side seems to have kept Detroit-area music lovers from another splendid Showcase offering, but- as always- there were no problems or "incidents" of any kind waiting for those who dared to venture out to Harper & Van Dyke. Folks are missing a whole lot of good music by falling for that particular media myth- isn't t about time for the real?