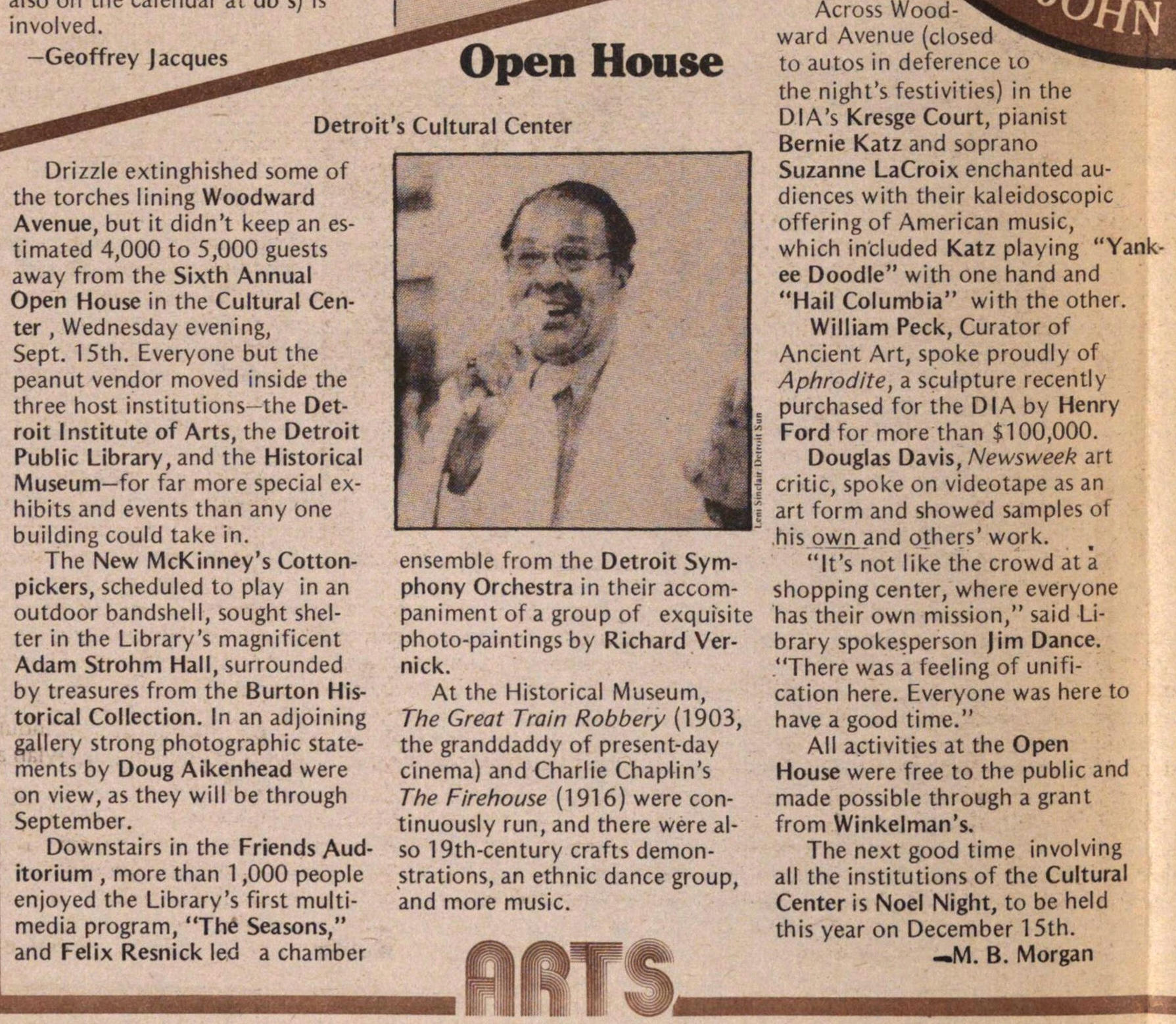 Drizzle extinghished some of the torches lining Woodward Avenue, but t didn't keep an estimated 4,000 to 5,000 guests away from the Sixth Annual Open House n the Cultural Center , Wednesday evening, Sept. 15th. Everyone but the peanut vendor moved nside the three host nstitutions-the Detroit Instituto of Arts, the Detroit Public Library.and the Historical Museum- for far more special exhibits and events than any one building could take in. The New McKinney's Cottonpickers, scheduled to play in an outdoor bandshell, sought shelter in the Library's magnificent Adam Strohm Hall, surrounded by treasures from the Burton Historical Collection. In an adjoining gallery strong photographic statements by Doug Aikenhead were on view, as they will be through September. Downstairs n the Friends Auditorium , more than 1 ,000 people enjoyed the Library's first multimedia program, "The Seasons," and Felix Resnick led a chamber ensemble from the Detroit Symphony Orchestra n their accompaniment of a group of exquisite photo-paintings by Richard Vernick. At the Historical Museum, The Great Train Robbery (1903, the granddaddy of present-day cinema) and Charlie Chaplin's The Firehouse (1916) were continuously run, and there were also 19th-century crafts demonstrations, an ethnic dance group, and more music. Across ward Avenue (closed to amos in deference 10 WB the night's festivities) n the DIA's Kresge Court, pianist Bernie Katz and soprano Suzanne LaCroix enchanted audiences with their kaleidoscopic offering of American music, which included Katz playing "Yankee Doodle" with one hand and "Hail Columbia" with the other. WMIiam Peck, Curator of Ancient Art, spoke proudly of Aphrodite, a sculpture recently purchased for the DIA by Henry Ford for more than $100,000. Douglas Davis, Newsweek art critic, spoke on videotape as an art form and showed samples of his own_and others' work. "U's not like the crowd at a shopping center, where everyone has their own mission," said Library spokesperson Jim Dance. "There was a feeling of unification here. Everyone was here to have a good time." All activities at the Open House were free to the public and made possible through a grant from Winkelman's. The next good time involving all the institutions of the Cultural Center is Noel Night, to be held this year on December 15th.