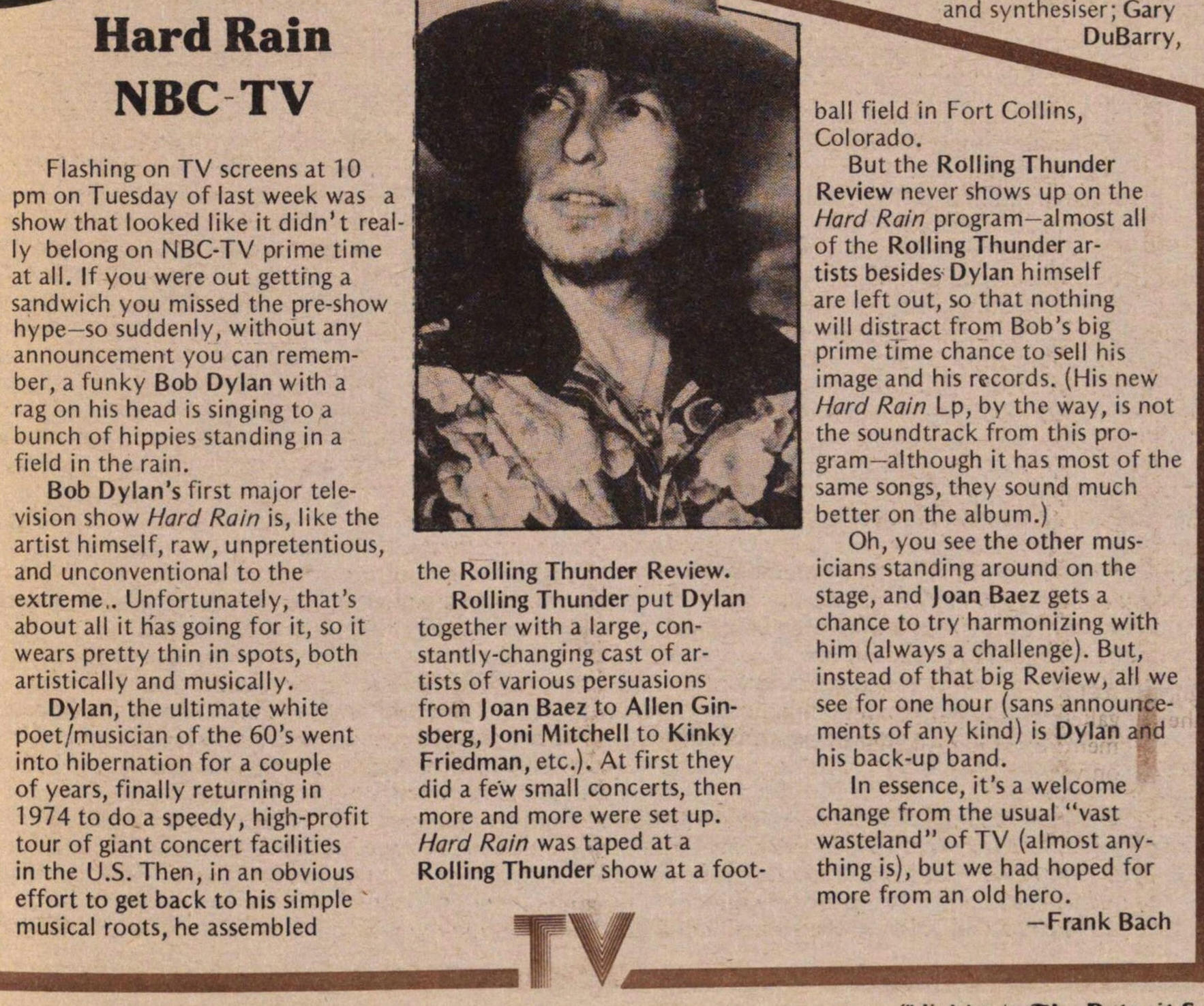 Flashing on TV screens at 10 pm on Tuesday of last week was a show that looked Mke t didn't really belong on NBC-TV prime time at all. If you were out getting a sandwich you missed the pre-show hype- so suddenly, without any announcement you can remember, a funky Bob Dylan with a rag on his head is singing to a bunch of hippies standing n a field in the rain. Bob Dylan's first major televisión show Hard Rain is, like the artist himself, raw, unpretentious, and unconventional to the extreme.. Unfortunately, that's about all it Kas going for it, so it wears pretty thin n spots, both artistically and musically. Dylan, the ultímate white poetmusician of the 60's went into hibernation for a couple of years, finally returning in 1974 to do a speedy, high-profit tour of giant concert facilities in the U.S. Then, in an obvious effort to get back to his simple musical roots, he assembled the Rolling Thunder Review. Rolling Thunder put Dylan together with a large, constantly-changing cast of artists of various persuasions from Joan Baez to Allen Ginsberg, )oni Mitchell to Kinky Friedman, etc). At first they did a few small concerts, then more and more were set up. Hard Rain was taped at a Rolling Thunder show at a ball field in Fort Collins, Colorado. But the Rolling Thunder Review ncver shows up on the Hard Rain program- al most all of the Rolling Thunder artists besides Dylan himself are left out, so that nothing wijl distract from Bob's big prime time chance to sell his image and his records. (His new Hard Rain Lp, by the way, is not the soundtrack from this program- although it has most of the same songs, they sound much better on the album.) Oh, you see the other musicians standing around on the stage, and Joan Baez gets a chance to try harmonizing with him (always a challenge). But, instead of that big Review, all we see for one hour (sans announcementsof any kind) is Dylan arid his back-up band. In essence, it's a welcome change from the usual "vast wasteland" of TV (almost anything is), but we had hoped for more from an old hero.