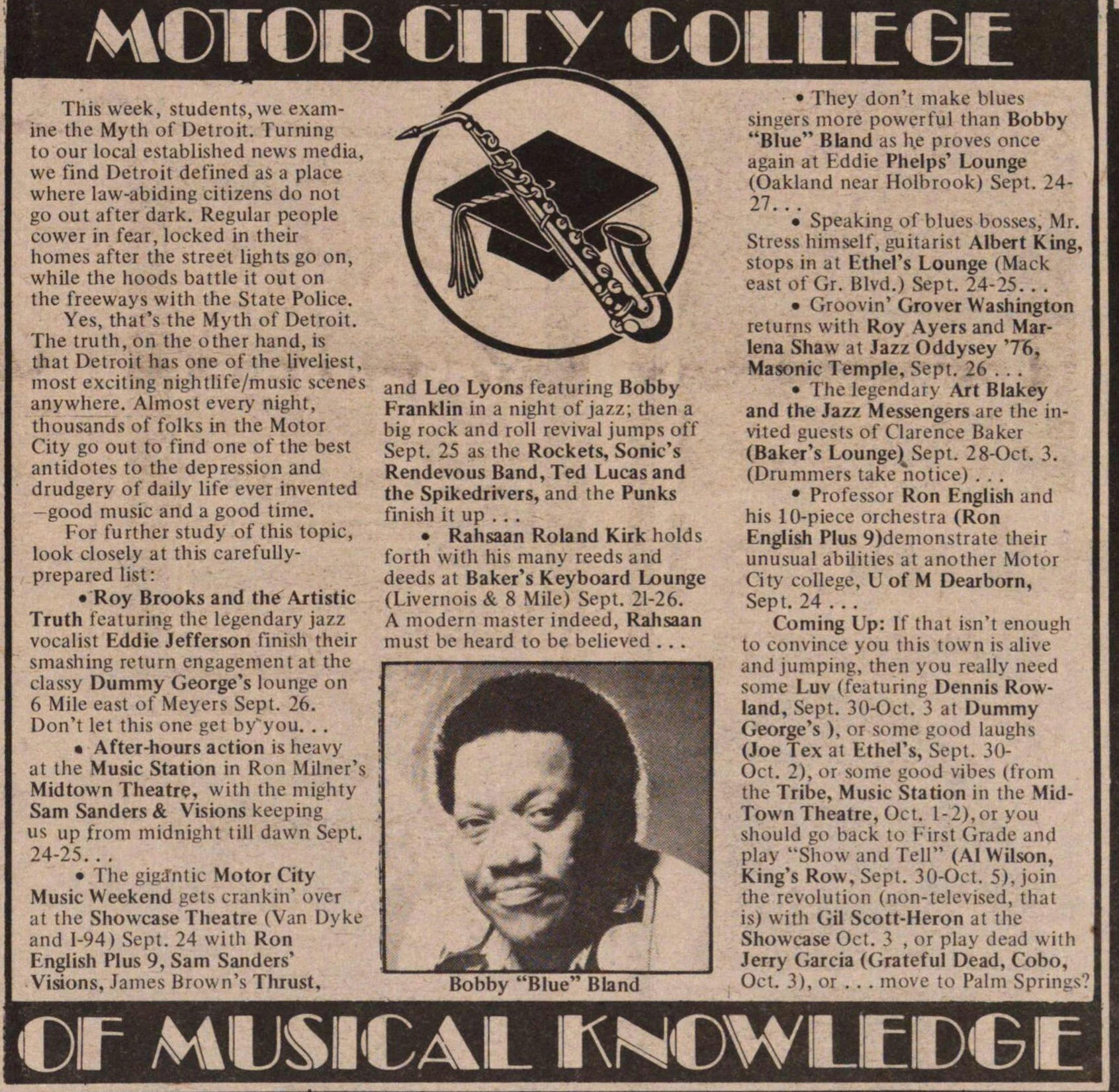 Thisweek, students.we examine the Myth of Detroit. Turning to our local established news media, we find Detroit defined as a place where law-abiding citizens do not go out after dark. Regular people cower in fear, locked in their homes after the street lights go on, while the hoods battle it out on the freeways with the State Pólice. Yes, that's the Myth of Detroit. The truth, on the other hand, is that Detroit has une of the liveliest, most exciting nightlifemusic scènes anywhere. Almost every night, thousands of folks in the Motor City go out to find one of the best antidotes to the depression and drudgery of daily life ever invented -good music and a good time. For further study of this topic, look closely at this carefullyprepared list: Roy Brooks and the Artislk Truth featuring the legendary jazz vocalist ildie Jefferson finish their smash ing return engagement at the classy Dummy George's lounge on 6 Mile east of Meyers Sept. 26. Don't let this one get by'you. . . After-hours action is heavy at the Music Station in Ron Milner's Midtown Theatre, with the mighty Sam Sanders & Visions keeping US up from midnight lili dawn Sept. 24-25. . . The gigïntic Motor Cjty Music Weekend sets crankin1 over at the Showcase Theatre (Van Dyke and 1-94) Sept. 24 with Ron Inglish Plus 9, Sam Sanders' Visions, James Iinn n's Thrust, and Leo Lyons featuring Bobby I ranklin in a night of jazz; then a big rock and roll revival jumps off Sept. 25 as the Rockets, Sonic's Rendevous Band, Ted Lucas and the Spikedrivers, and the Punks finish it up . . . Kansaan Roland Kiik holds forth witli his many reeds and deeds at Baker's Keyboard Lounge (Livernois & 8 Mile) Sept. 21-26. A modern master indeed, RaJisaan must bc heard to be believed . . . They don't make blues singers more powcrful than Bobby "Blue" Bland as hfl proves once again at Eddie Phelps' Lounge (Oakland near Holbiook) Sept I 27... Speaking ot blues bosses, Mr. Stress himselt', guitarist Albert King. stops in at Ethel's Lounge (Mack cast of Gr. Blïd.) Sept. 24-25.. . Groovin' Grover Washington returns with Roy Ayers and Marlena Shaw at Jazz Oddysey '76, Masonic Temple, Sept. 26 ... The legendary Art Blakey and the Jazz Messengers are the invited uu-sis of Clarence Baker (Baker's Lounge Sept. 28-Oct. 3. (Drummers take 'lotice) . . . Professor Ron English and his 10-piece orchestra (Ron English Plus 9)demonstrate their unustial abilities at another Motor City college, U of M Dearborn, Sept. 24 ... Coming Up: If tliat isn't enough to convince you this town i alive and jumping, then you re.illy need some Luv (featuring Dennis Rowland, Sept. 30-Oct. 3 at Dummy George's ), or some good laughs (JoeTex at Ethel's, Sept. 30Oct. 2), or some good vibes (trom the Tribe, Music Station in the MidTown Theatre, Oct. 1-2), or you should go back to lirst Grade and play "Show and Teil" (Al Wilson, King's Row.Sept. 30-Oct. 5). join the revolution (non-televised, that is) with Gil Scott-Heron at the Showcase Oct. 3 , or play dead with Jerry García (Grateful Dead, Cobo, Oet. 3), or . . . move to Palm Springs1? I