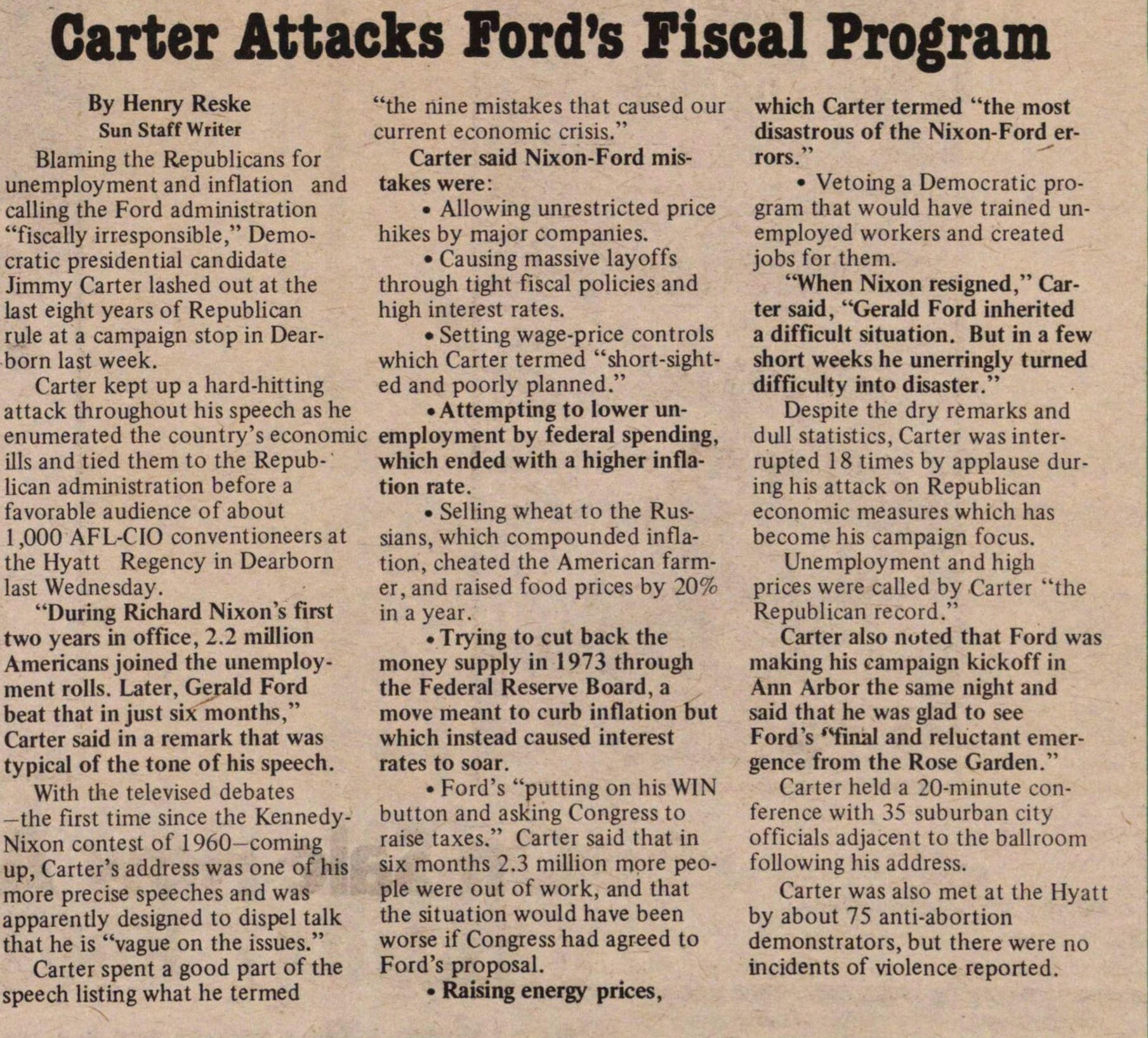 SunStaffWriter Blaming the Republicans for unemployment and inflation and calling the Ford administration "fiscally irresponsible," Democratie presidential candidate Jimmy Carter lashed out at the last eight years of Republican rule at a campaign stop in Dearborn last week. Carter kept up a hard-hitting attack throughout his speech as he enumerated the country's economie ills and tied them to the Republican administration before a favorable audience of about 1 ,000 AFL-CIO conventioneers at the Hyatt Regency in Dearborn last Wednesday. "During Richard Nixon's first two years in office, 2.2 mili ion Americans joined the unemployment rolls. Later, Gerald Ford beat that in just six months," Carter said in a remark that was typical of the tone of his speech. With the televised debates -the first time since the KennedyNixon contest of 1960-coming up, Carter's address was one of his more precise speeches and was apparently designed to dispel talk that he is "vague on the issues." Carter spent a good part of the speech listing what he termed "the nine mistakes that caused our current economie crisis." Carter said Nixon-Ford mistakes were: Allowing unrestricted price hikes by major companies. Causing massive layoffs through tight fiscal policies and high interest rates. Setting wage-price controls which Carter termed "short-sighted and poorly planned." Attempting to lower unemployment by federal spending, which ended with a higher inflation rate. Selling wheat to the Russians, which compounded inflation, cheated the American farmer, and raised food prices by 20% in a year. Trying to cut back the money supply in 1 973 through the Federal Reserve Board, a move meant to curb inflation but which instead caused interest rates to soar. Ford's "putting on his WIN button and asking Congress to raise taxes." Carter said that in six months 2.3 million more people were out of work, and that the situation would have been worse if Congress had agreed to Ford's proposal. Raising energy prices, which Carter termed "the most disastrous of the Nixon-Ford errors." Vetoing a Democratie program that would have trained unemployed workers and created jobs for them. "When Nixon resigned," Carter said, "Gerald Ford inherited a difficult situation. But in a few short weeks he unerringly turned difficulty into disaster." Despite the dry remarks and dull statistics, Carter wasinterrupted 1 8 times by applause during his attack on Republican economie measures which has become his campaign focus. Unemployment and high prices were called by Carter "the Republican record." Carter also noted that Ford was making his campaign kickoff in Ann Arbor the same night and said that he was glad to see Ford 's ffinal and reluctant emergence from the Rose Garden." Carter held a 20-minute conference with 35 suburban city officials adjacent to the ballroom following his address. Carter was also met at the Hyatt by about 75 anti-abortion demonstrators, but there were no incidents of violence reported.