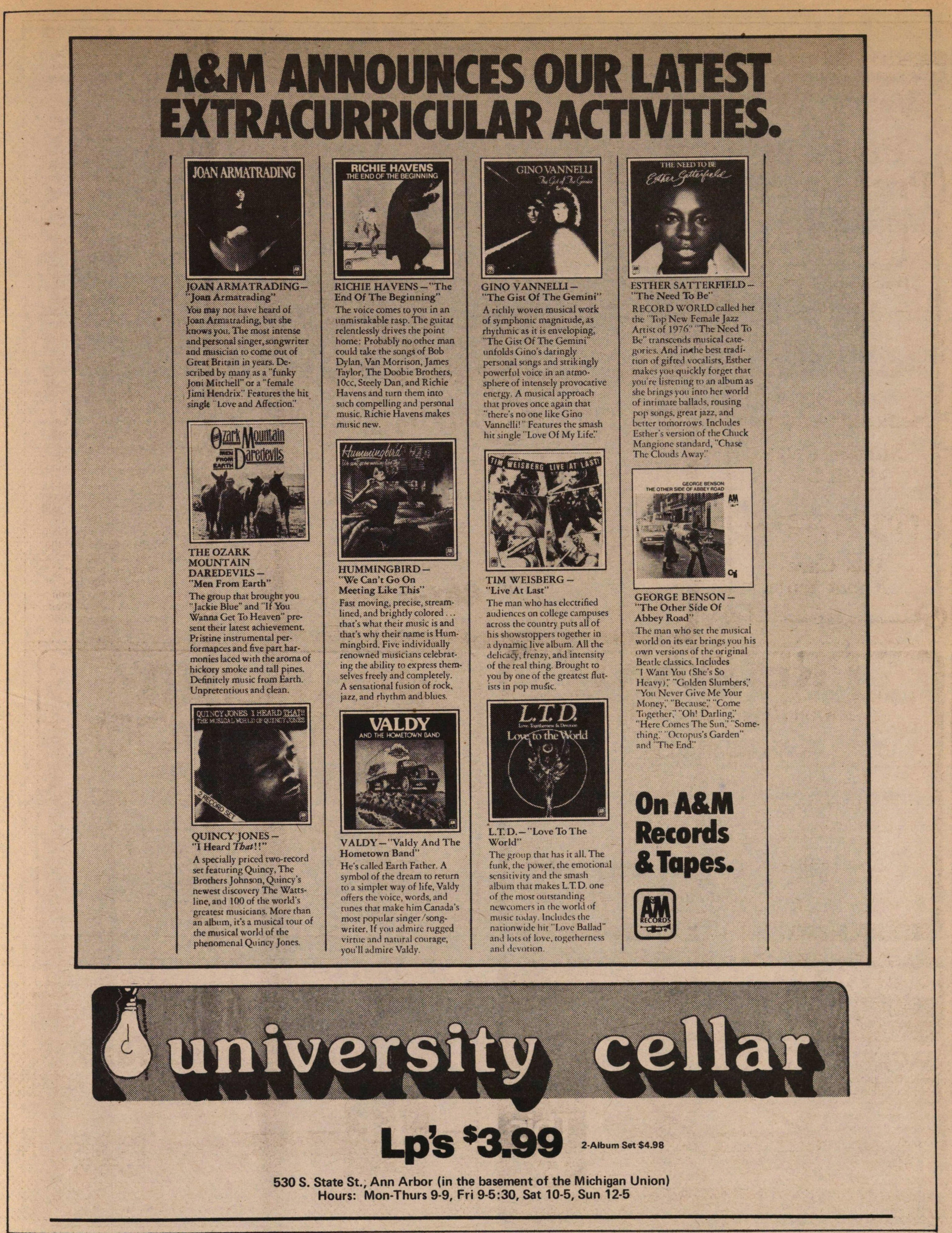 You may not have heard of Joan Armatrading, but she knows you. The most intense and personal singer, songwriter and musician to come out of Great Britain in years. Described by many as a funky Joni Mitchell or a fatal Jimi hendrix. Features the hit single Love and Affection.

The group that brought you Jackie Blue and If You Wanna Get To Heaven present their latest achievement. Pristine instrumental performances and five part harmonies laced with the aroma of hickory smoke and tall pines. Definitely music from Earth. unpretentious and clean.

A specially priced two-record set featuring Quincy, The Brothers Johnson, Quincy's newest discovery The Waterline, and 100 of the world's greatest musicians. More than an album, it's a musical tour of the musical world of the phenomenal Quincy Jones.

RICHIE HAVENS, THE END OF THE BEGINNING

RICHIE HAVENS-The End of The Beginning

The voice comes to you in an unmistakable rasp. The guitar relentlessly drives the point home: Probably no other man could take the songs of Bob Dylan, Van Morrison, James Taylor, The Doobie Brothers, 10cc, Steely Dan, and Richie Havens and turn them into such compelling and personal music Richie havens makes music new.

Fast moving, precise, streamlined, and brightly colored...that's what their music is and that's why their name is Hummingbird. Five individually renowned musicians celebrating the ability to express themselves freely and completely. A sensational fusion of rock, jazz, and rhythm and blues.

VALDY- Aaldy And The Hometown Band

He's called Earth Father. A symbol of the dream to return to a simpler way of life, Valdy offers the voice, words, and tunes that make him Canada's most popular singer/song-writer. If you admire rugged virtue and natural courage, you'll admire Valdy.

GINO VANNELLI-The  Gist Of The Gemini

A richly woven musical work of symphonic magnitude, as rhythmic as it is enveloping, The Gist Of The Gemini unfolds Gino's daringly personal songs and strikingly powerful voice in an atmosphere of intensely provocative energy. A musical approach that proves once again that there's no one like Gino Vannelli! Features the smash hit single Love Of My Life.

The man who has electrified audiences on college campuses across the country puts all of his showstoppers together in a dynamic live album, All the delicacy, frenzy, and intensity of the real thing. Brought to you by one of the greatest flutists in pop music.

The group that has it all. The funk, the power, the emotional sensitivity and the smash album that makes L.T.D. one of the most outstanding newcomers in the world of music today. Includes the nationwide hit "Love Ballad" and lots of love, togetherness and devotion.

ESTHER SATTERFIELD- The Need To Be

Record World called her the Top New Female Jazz Artist of 1976. The Need To Be transcends musical categories. And in the best tradition of gifted vocalists, Esther makes you quickly forget that you're  listening to an album as she brings you into her world of intimate ballads, rousing pop songs, great jazz, and better tomorrows Includes Esther's version of the Chuck Mangione standard Chase The Clouds Away.

GEORGE BENSON-The Other Side Of Abbey Road

The man who set the musical world on its ear brings you his own versions of the original beatle classics. Includes I Want You(She is So Heavy), Golden Slumbers, You Never Give Me Your Money. Because, Come Together, Oh! Darling, Here Comes The Sun, Something, Octopus's Garden and The End.