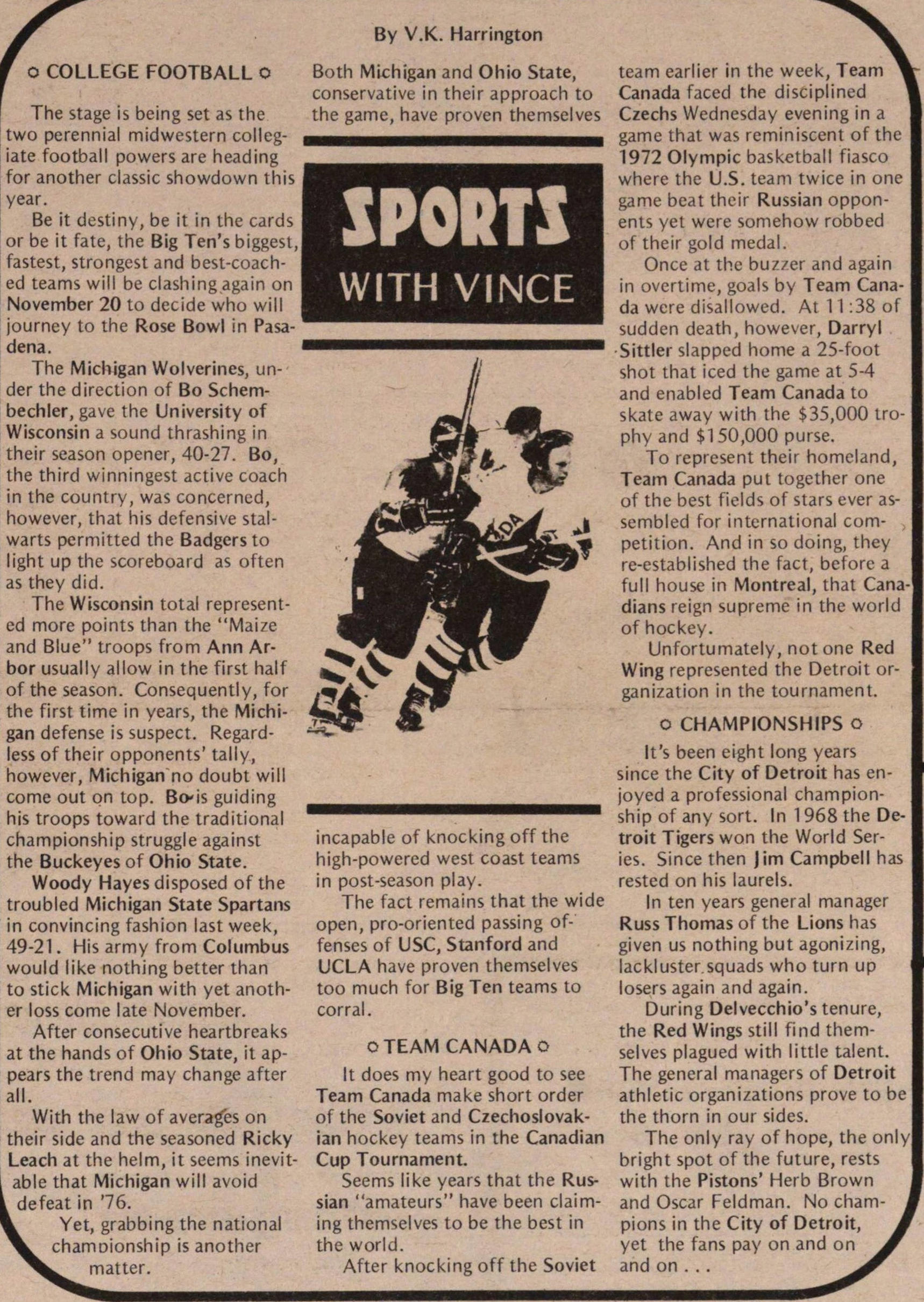 f o COLLEGE FOOTBALL O The stage s being set as the two perennial midwestern collegate football powers are heading for another classic showdown this year. Be t destiny, be t in the cards or be it fate, the Big Ten's biggest, fastest, strongest and best-coached teams will be clashing again on November 20 to decide who will ourney to the Rose Bowl n Pasadena. i The Michigan Wolverines, under the direction of Bo Schembechler, gave the University of Wisconsin a sound thrashing n their season opener, 40-27. Bo, the third winningest active coach in the country, was concerned, however, that his defensive stalwarts permitted the Badgersto light up the scoreboard as often as they did. The Wisconsin total represented more points than the "Ma7e and Blue" troops from Ann Arbor usually allow in the first half of the season. Consequently, for the first time in years, the Michigan defense is suspect. Regardless of their opponents' tally, however, Michigan no doubt will come out on top. Bois guiding his troops toward the traditional championship struggle against the Buckeyes of Ohio State. Woody Hayes disposed of the troubled Michigan State Spartans in convincing fashion last week, 49-21 . His army from Columbus would like nothing better than to stick Michigan with yet another loss come late November. After consecutive heartbreaks at the hands of Ohio State, it appears the trend may change after all. With the law of averages on their side and the seasoned Ricky Leach at the helm, t seems ineviti able that Michigan will avoid { defeat in 76. V Yet, grabbing the national k charriDionship is another matter. Both Michigan and Ohio State, conservative n their approach to the game, have proven themselves incapable of knocking off the high-powered west coast teams in post-season play. The fact remains that the wide open, pro-oriented passing of-' fenses of USC, Stanford and UCLA have proven themselves too much for Big Ten teams to corral. o TEAM CANADA o It does my heart good to see Team Canada make short order of the Soviet and Czechoslovakian hockey teams in the Canadian Cup Tournament. Seems like years that the Russian "amateurs" have been claiming themselves to be the best in the world. After knocking off the Soviet team earlier n the week, Team Canada faced the disciplined Czechs Wednesday evening n a game that was reminiscent of the 1972 Olympic basketball fiasco where the U.S. team twice n one game beat their Russian opponents yet were somehow robbed of their gold medal. Once at the buzzer and again n overtime, goals by Team Canada were disallowed. At 11 :38 of sudden death, however, Darryl Sittler slapped home a 25-foot shot that eed the game at 5-4 and enabled Team Canada to skate away with the $35,000 trophy and $150,000 purse. To represent their homeland, Team Canada put together one of the best fields of stars ever assembled for international competition. And in so doing, they re-established the fact, before a full house in Montreal, that Canadians reign supreme in the world of hockey. Unfortumately, not one Red Wing represented the Detroit organization in the tournament. o CHAMPIONSHIPS o It's been eight long years since the City of Detroit has enoyed a professional championship of any sort. In 1968 the Detroit Tigers won the World Series. Since then Jim Campbell has rested on his laurels. In ten years general manager Russ Thomas of the Lions has given us nothing but agonizing, lackluster squads who turn up losers again and again. During Delvecchio's tenure, the Red Wings still find themselves plagued with little talent. The general managers of Detroit athletic organizations prove to be the thorn in our sides. The only ray of hope, the only bright spot of the future, rests with the Pistons' Herb Brown and Osear Feldman. No m pions in the City of Detroit, m yet the fans pay on and on f and on ... T