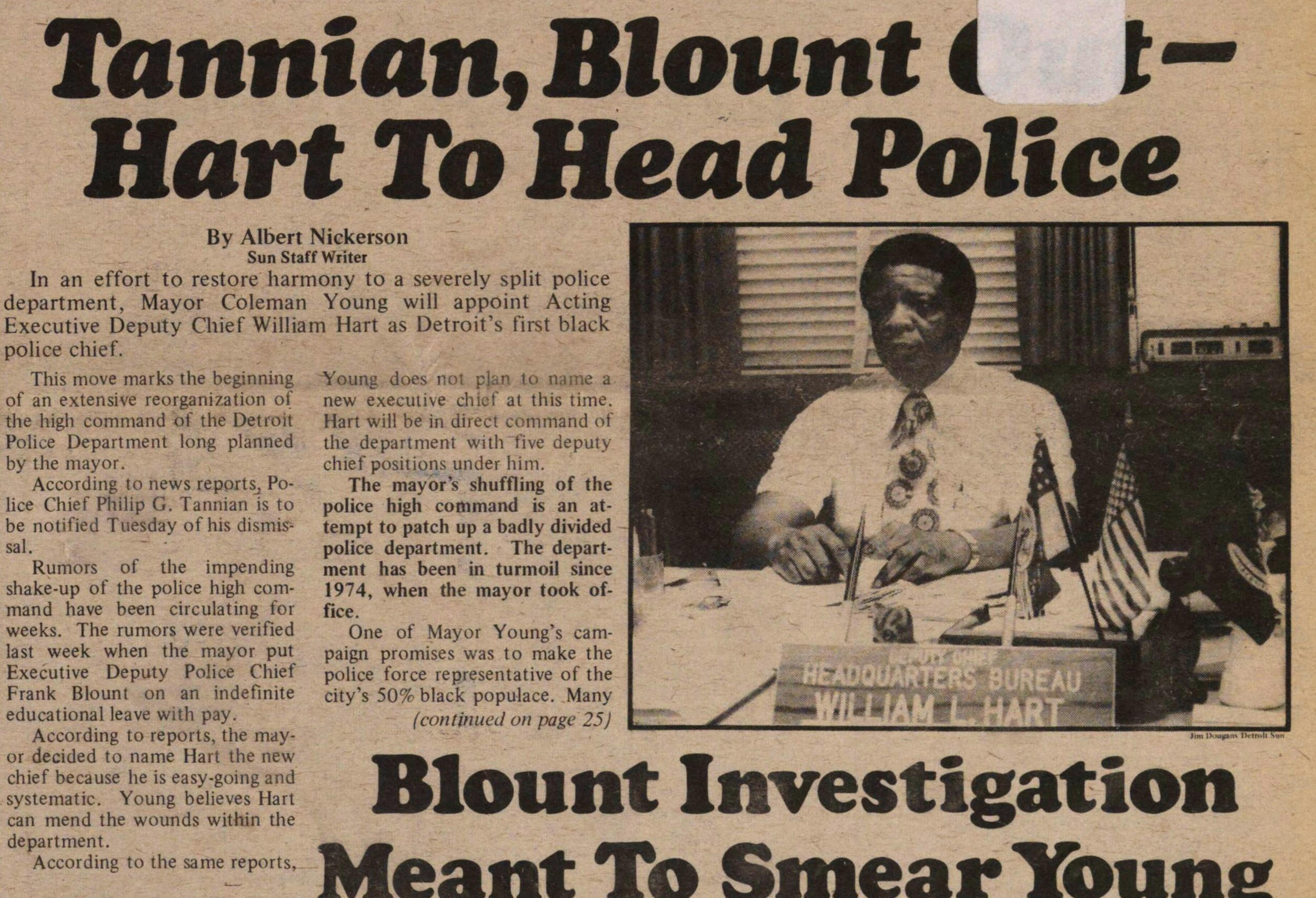 This move marks the beginning of an extensive reorganisation of the high command of the Detroit Police Department long planned by the mayor.

According to news reports, Police Chief Philip G. Tannian is to be notified Tuesday of his dismissal.

Rumors of the impending shake-up of the police high command have been circulating for weeks. The rumors were verified last week when the mayor put Executive Deputy Police Chief Frank Blount on an indefinite educational leave with pay.

According to reports, the mayor decided to name Hart the new chief because he is easy-going and systematic. Young believes Hart can mend the wounds within the department.

According to the same reports, Young does not plan to name a new executive chief at this time. Hart will be in direct command of the department with five deputy chief positions under him.

The mayor's shuffling of the police high command is an attempt to patch up a badly divided police department. The department has been in turmoil since 1974, when the mayor took office.

One of Mayor Young's campaign promises was to make the police force representative of the city's 50% black populace. (continuad on page 25)

This resentment clearly surfaced last year in front of the Federal Building when white officers mounted a protest against police lay-offs. White officers attacked other black officers and black passers-by.

The mayor first attempted to remove Blount by placing him on sick leave last month. Blount was to use a backlog of sick days to get him out of the department by the end of the year. However, Blount remained on the job when he was charged with being the target of a federal drug probe the day after his leave was to start.

Representatives of the Drug Enforcement Agency (DEA) raided Blount's home on September 20, claiming to be in search of evidence of narcotics trafficking. The federal agents, assisted by Tannian and other Detroit officers, seized records, diaries, letters, checks and other items carried in a box and a large file net. The probe has since widened to include other Detroit police officials, a police commissioner, and the entire 13th precinct.

Blount's attorneys said that federal investigators have found no evidence of wrong-doing on his part. Further, the lawyers claim that they will file a damage suit in Blount's behalf charging one to three top police officials with giving federal probers false information about Blount's activities in order to discredit him.

Indications are that one of the persons who will be named in the suit is out-going Chief Tannian.

Many top city officials believe that the current DEA investigation is a "smear campaign" to discredit the Young administration.

Young's biggest job now is to replace Tannian with an officer who can bring harmony to the police department.

Hart worked as a coal miner in Appalachia until 1949. He began his police career at the old Ninth (Bethune-John R) Precinct, where one of his first partners was Deputy Chief George Benett.

Bennett headed the police detail which probed into a 10th (Livernois) Precinct drug activity and eventually helped to bring nine police officers to trial for dealing in heroin. Ironically it was Philip Tannian, at that time an aide to then-Mayor Roman Gribbs, who was assigned to assist Bennett in his controversial and vastly unpopular investigation.

Hart spent most of his career working in the areas of vice and organized crime. In August 1974 he was named one of five Deputy Chiefs and given command of the Headquarters Bureau, which includes homicide, crimes against persons, narcotics and organized crime.

Hart has been responsible for both headquarters and patrol functions since replacing Blount last Wednesday. Blount's attorneys said that federal investigators have found no evidence of wrong-doing on the Deputy Chief's part.