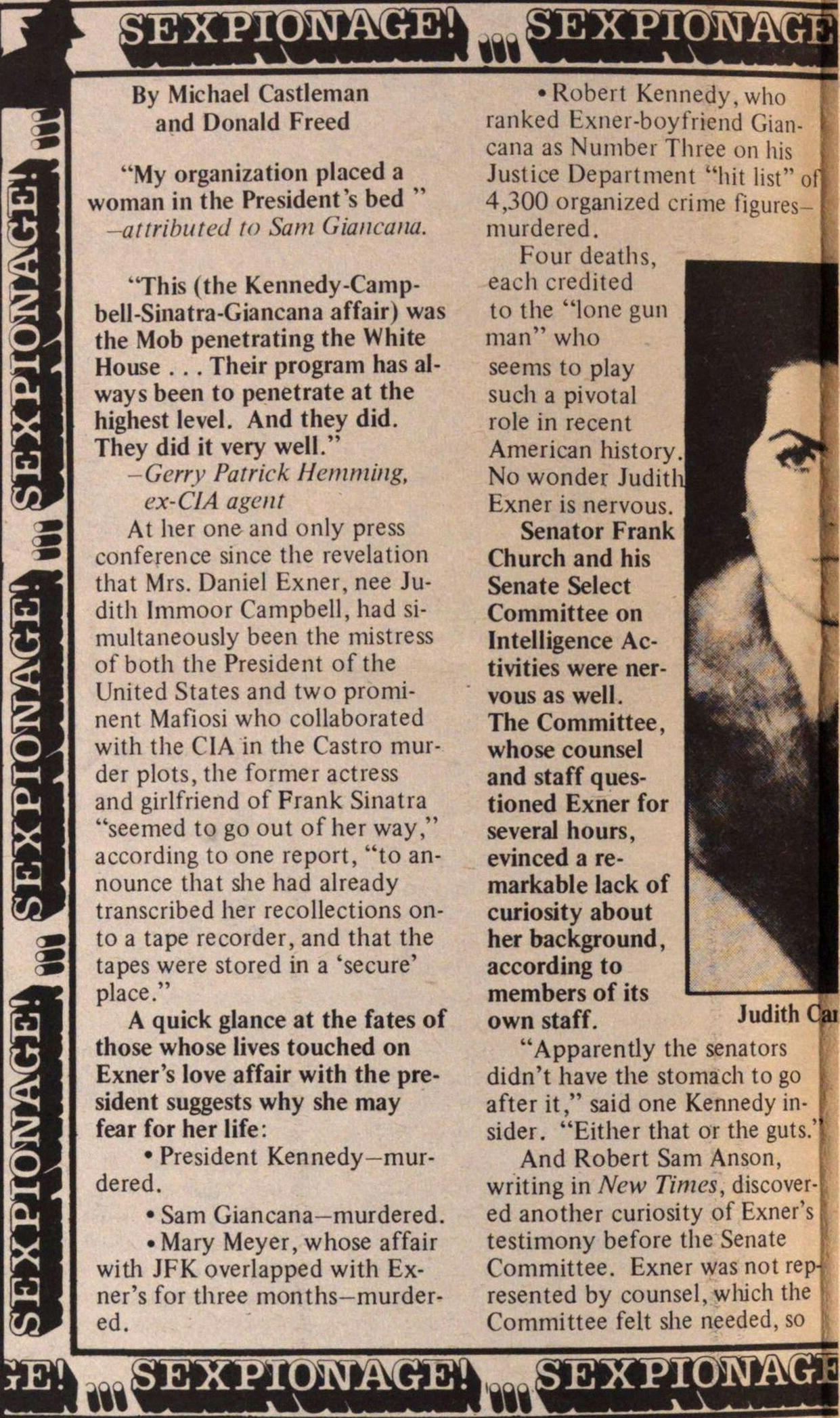 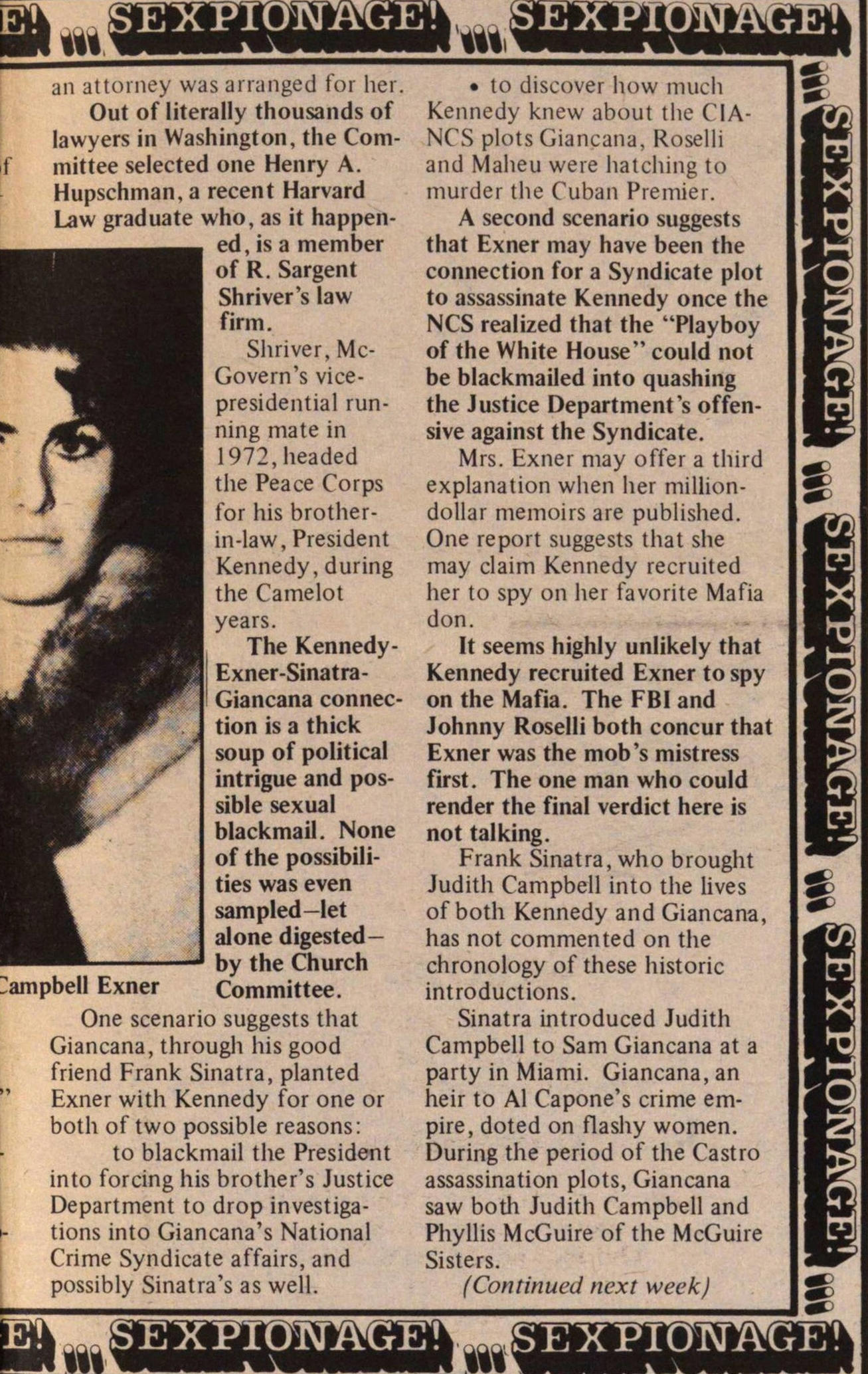 By Michael Castleman and Donald Freed

"My organization placed a woman in the President 's bed " attributed to Sam Giancana.

"This (the Kennedy-Campbell-Sinatra-Giancana affair) was the Mob penetrating the White House . . . Their program has always been to penetrate at the highest level. And they did. They did it very well." -Gerry Patrick Hemming, ex-CIA agent

At her one and only press conference since the revelation that Mrs. Daniel Exner, nee Judith Immoor Campbell, had simultaneously been the mistress of both the President of the United States and two prominent Mafiosi who collaborated with the CIA in the Castro murder plots, the former actress and girlfriend of Frank Sinatra "seemed to go out of her way," according to one report, "to announce that she had already transcribed her recollections onto a tape recorder, and that the tapes were stored in a 'secure' place."

A quick glance at the fates of those whose lives touched on Exner's love affair with the president suggests why she may fear for her life:

Mary Meyer, whose affair with JFK overlapped with Exner's for three months- murdered.

Four deaths, each credited to the "lone gun man" who seems to play such a pivotal role in recent American history. No wonder Judith Exner is nervous.

Senator Frank Church and his Senate Select Committee on Intelligence Activities were nervous as well. The Committee, whose counsel and staff questioned Exner for several hours, evinced a remarkable lack of curiosity about her background, according to members of ts own staff. "

Apparently the senators didn't have the stomach to go after it," said one Kennedy insider. "Either that or the guts.'

And Robert Sam Anson, writing in New Times, discovered another curiosity of Exner's testimony before the Senate Committee. Exner was not represented by counsel, which the Committee felt she needed, so an attorney was arranged tor her.

Out of literally thousands of lawyers in Washington, the Committee selected one Henry A. Hupschman, a recent Harvard Law graduate who, as it I happened, is a member of R. Sargent Shriver's law firm.

Shriver, McGovern's vice-presidential running mate in 1972, headed the Peace Corps for his brother in-law, President Kennedy, during the Camelot years. The Kennedy-Exner-Sinatra- Giancana connection is a thick soup of political intrigue and possible sexual blackmail. None of the possibilities was even sampled- let alone digested by the Church Committee.

One scenario suggests that Giancana, through his good friend Frank Sinatra, planted Exner with Kennedy for one or both of two possible reasons:

to blackmail the President into forcing his brother's Justice Department to drop investigations into Giancana's National Crime Syndicate affairs, and possibly Sinatra's as well.

to discover how much Kennedy knew about the CIA-NCS plots Giancana, Roselli and Maheu were hatching to murder the Cuban Premier.

A second scenario suggests that Exner may have been the connection for a Syndicate plot to assassinate Kennedy once the NCS realized that the "Playboy of the White House" could not be blackmailed into quashing the Justice Department 's offensive against the Syndicate.

Mrs. Exner may offer a third explanation when her million dollar memoirs are published. One report suggests that she may claim Kennedy recruited her to spy on her favorite Mafia don.

It seems highly unlikely that Kennedy recruited Exner to spy on the Mafia. The FBI and Johnny Roselli both concur that Exner was the mob's mistress first. The one man who could render the final verdict here is not talking.

Frank Sinatra, who brought Judith Campbell into the lives of both Kennedy and Giancana, has not commented on the chronology of these historic introductions.

Sinatra introduced Judith Campbell to Sam Giancana at a party in Miami. Giancana, an heir to Al Capone's crime empire, doted on flashy women. During the period of the Castro assassination plots, Giancana saw both Judith Campbell and Phyllis McGuire of the McGuire Sisters.