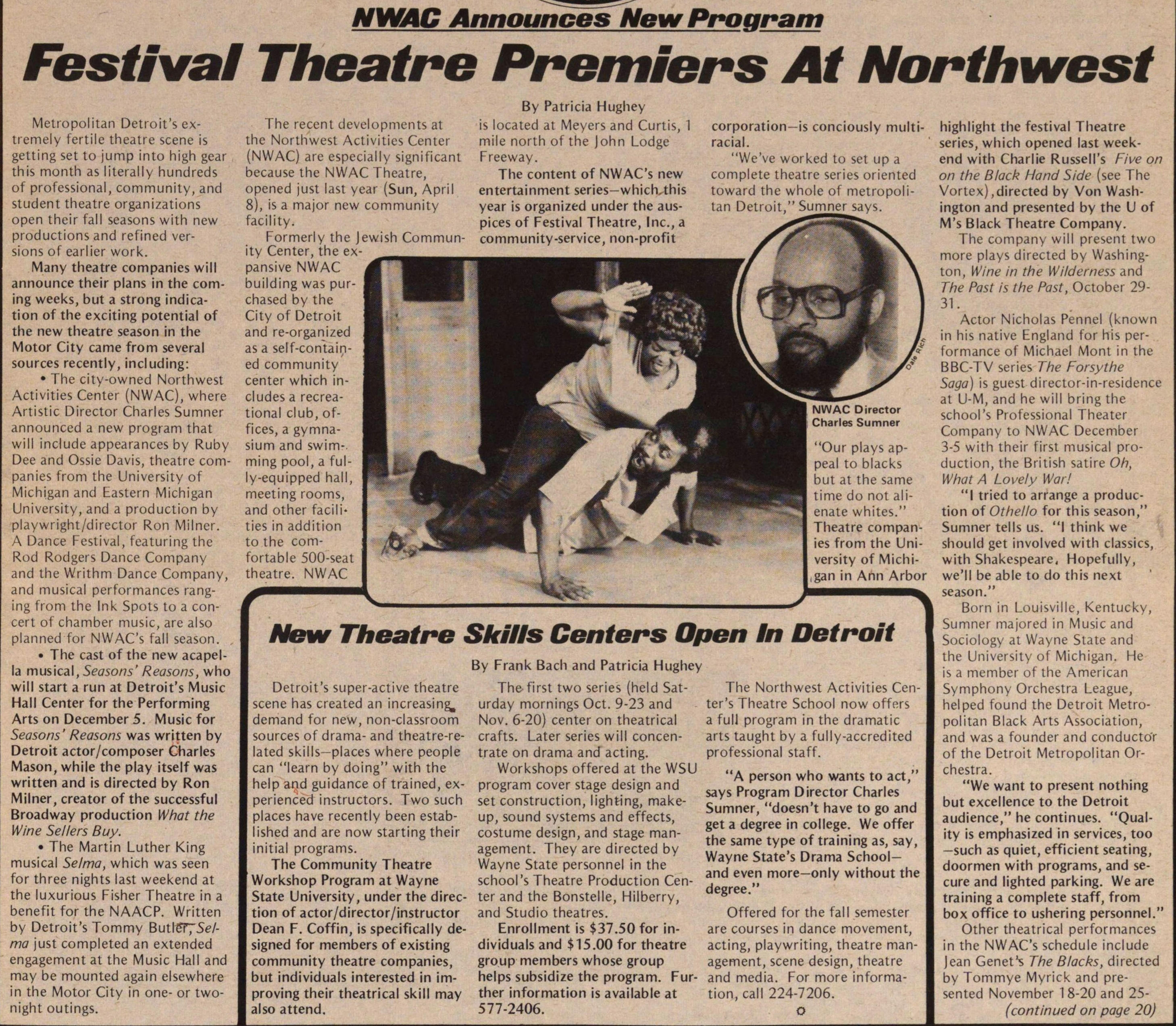 Metropolitan Detroit's extremely fertile theatre scene is getting set to jump into high gear this month as literally hundreds of professional, community, and student theatre organizations open their fall seasons with new productions and refined versions of earlier work.

Many theatre companies will announce their plans in the coming weeks, but a strong indication of the exciting potential of the new theatre season in the Motor City came from several sources recently, including:

. The city-owned Northwest Activities Center (NWAC), where Artistic Director Charles Sumner announced a new program that will include appearances by Ruby Dee and Ossie Davis, theatre companies from the University of Michigan and Eastern Michigan University, and a production by playwright/director Ron Milner. A Dance Festival, featuring the Rod Rodgers Dance Company and the Writhm Dance Company, and musical performances ranging from the Ink Spots to a concert of chamber music, are also planned for NWAC's fall season.

. The cast of the new acapella musical, Seasons' Reasons, who will start a run at Detroit's Music Hall Center for the Performing Arts on December 5. Music for Seasons' Reasons was written by Detroit actor/composer Charles Mason, while the play itself was written and is directed by Ron Milner, creator of the successful Broadway production What the Wine Sellers Buy.

. The Martin Luther King musical Selma, which was seen for three nights last weekend at the luxurious Fisher Theatre in a benefit for the NAACP. Written by Detroit's Tommy Butler,  Selma just completed an extended engagement at the Music Hall and may be mounted again elsewhere in the Motor City in one -or two- night outings.

Formerly the Jewish Community Center, the expansive NWAC building was purchased by the City of Detroit and re-organized as a self-contained community center which includes a recreational club, offices, a gymnasium and swimming pool, a fully-equipped hall, meeting rooms, and other facilities in addition to the comfortable 500-seat theatre. NWAC s located at Meyers and Curtís, 1 mile north of the John Lodge Freeway.

The content of NWAC's new entertainment series- which,this year is organized under the auspices of Festival Theatre, Inc., a community -service, non-profit Corporation- is consciously multiracial.

"We've worked to set up a complete theatre series oriented toward the whole of metropolitan Detroit," Sumner says. "Our plays appeal to blacks but at the same time do not alienate whites." Theatre companies from the University of Michigan in Ann Arbor highlight the festival Theatre series, which opened last weekend with Charlie Russell's Five on on the Black Hand Side (see The Vortex), directed by Von Washington and presented by the U of M's Black Theatre Company.

The company will present two more plays directed by Washington, Wine in the Wilderness and The Past is the Past, October 29-31.

Actor Nicholas Pennel (known in his native England for his performance of Michael Mont in the BBC-TV series The Forsythe Saga) is guest director-in-residence at U-M, and he will bring the school 's Professional Theater Company to NWAC December 3-5 with their first musical production, the British satire Oh, What A Lovely War!

"I tried to arrange a production of Otliello for this season," Sumner tells us. "I think we should get involved with classics, with Shakespeare, Hopefully, we'll be able to do this next season."

"We want to present nothing but excellence to the Detroit audience," he continues. "Quality is emphasized in services, too - such as quiet, efficient seating, doormen with programs, and secure and lighted parking. We are training a complete staff, from box office to ushering personnel."

Other theatrical performances in the NWAC's schedule include Jean Genets The Blacks, directed by Tommye Myrick and presented November 18-20 and 25-

27. Director of Black Theatre at Eastern Michigan University in Ypsilanti, Ms. Myrick has previously performed and directed at the U of M and with the Free Southern Theatre in New Orleans.

Sumner also says that Detroiter Ron Milner is scheduled to present a "surprise" at NWAC on April 15,16, 22, and 24.

Rounding out the Festival Theatre series are several non-dramatic performances, including a one-night stand for the Ossie Davis and Ruby Dee Show. Davis and Dee, who have worked together in films like Raisin in the Sun and Countdown at Kusini, will bring a special show to NWAC on November 6.

The Festival Theatre schedule also offers several very conservative musical offerings, including concerts by the Don Shirley Trio, Paul Winter Consort, the Ink Spots, and the Young Artists String Trio playing chamber music with pianist Francois Regnat. This, and the unfortunate ommission of local community theatre groups, does leave something to be desired for the tasteful and very community-conscious audiences that generally come out for theatrical events and concerts in Detroit.

Some local observers have suggested that Mr. Sumner's goal of an artistically and culturally-balanced program could best be reached by combining his ideas with those of last year's Director, Eugene Johnson, who had an energetic program centered on local theatre groups; the musical quality of the 1975 schedule (Count Basie, Dizzy Gillespie, Mercer Ellington); and more local artists like dancer Clifford Fears and composer Teddy Harris, who appeared there last month (Sun, Sept. 24). It is hoped that the scope of the Festival Theatre will be broadened to include some of these important cultural events, and it's certainly not too late to do so.