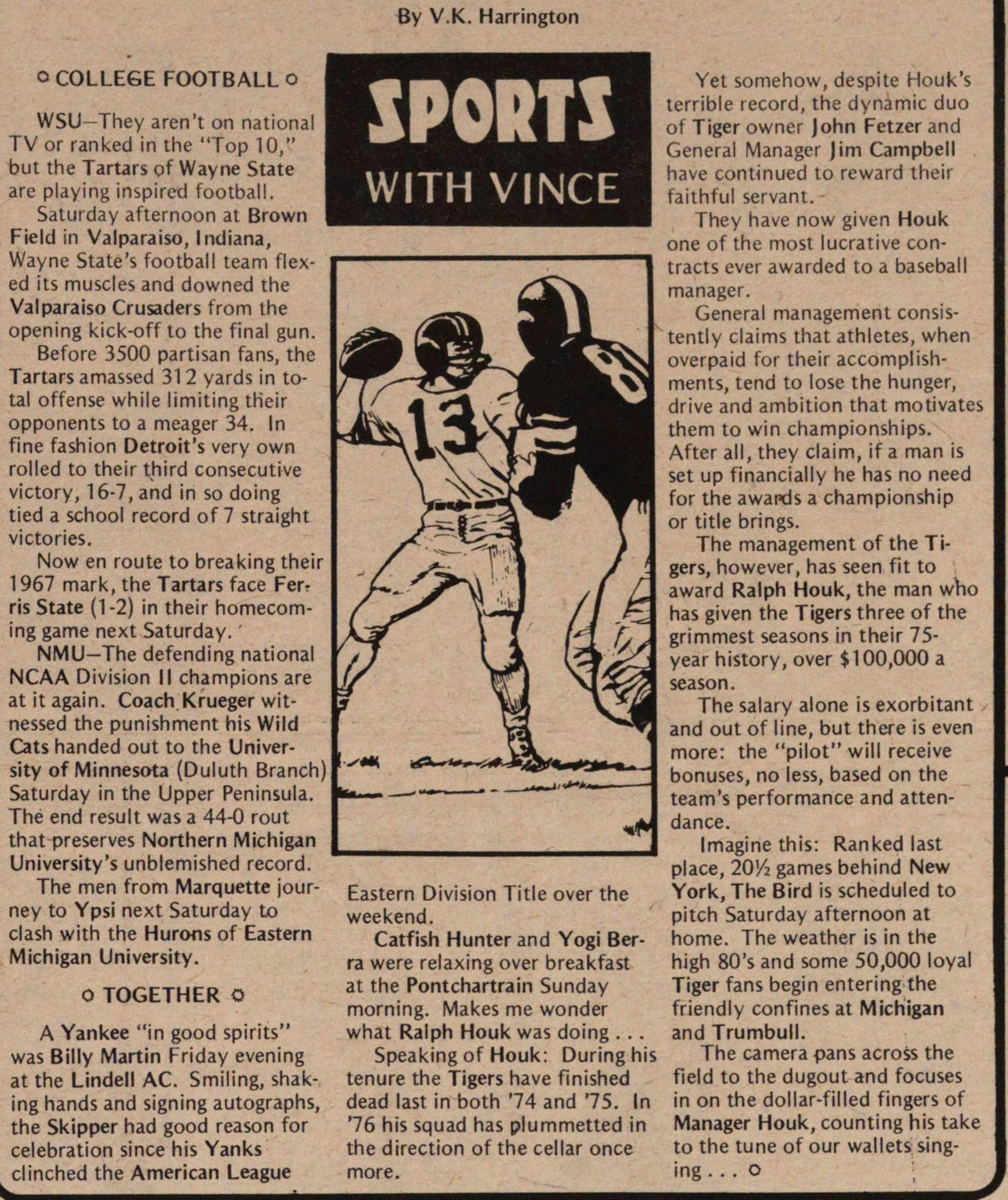 WSU- They aren't on national TV or ranked n the "Top 10," but the Tartars of Wayne State are playing inspired football.

Saturday afternoon at Brown Field in Valparaíso, Indiana, Wayne State's football team flexed its muscles and downed the Valparaíso Crusaders from the opening kick-off to the final gun.

Before 3500 partisan fans, the Tartars amassed 312 yards in total offense while limiting their opponents to a meager 34. In fine fashion Detroit's very own rolled to their third consecutive victory, 16-7, and in so doing tied a school record of 7 straight victories.

Now en route to breaking their 1967 mark, the Tartars face Ferris State (1-2) in their homecoming game next Saturday.

NMU- The defending national NCAA División II champions are at it again. Coach Krueger witnessed the punishment his Wild Cats handed out to the University of Minnesota (Duluth Branch) Saturday in the Upper Península. The end result was a 44-0 rout that preserves Northern Michigan Uníversity's unblemished record.

The men from Marquette journey to Ypsi next Saturday to clash with the Hurons of Eastern Michigan Universíty.

A Yankee "in good spirits" was Bílly Martín Friday evening at the Lindell AC. Smiling, shaking hands and signing autographs, the Skipper had good reason for celebration since his Yanks clinched the American League.

Eastern Division Title over the weekend.

Catfish Hunter and Yogi Berra were relaxing over breakfast at the Pontchartrain Sunday morning. Makes me wonder what Ralph Houk was doing . . .

Speaking of Houk: During his tenure the Tigers have finished dead last in both '74 and '75. In '76 his squad has plummetted in the direction of the cellar once more.

Yet somehow, despite Houk's terrible record, the dynamic duo of Tiger owner John Fetzer and General Manager Jim Campbell have continued to reward their faithful servant.

They have now given Houk one of the most lucrative contracts ever awarded to a baseball manager.

General management consistently claims that athletes, when overpaid for their accomplishments, tend to lose the hunger, drive and ambition that motivates them to win championships. After all, they claim, if a man is set up financially he has no need for the awards a championship or title brings.

The management of the Tigers, however, has seen fit to award Ralph Houk, the man who has given the Tigers three of the grimmest seasons in their 75year history, over $100,000 a season.

The salary alone is exorbitant and out of line, but there is even more: the "pilot" will receive bonuses, no less, based on the team's performance and attendance.

Imagine this: Ranked last place, 20 1/2 games behind New York, The Bird is scheduled to pitch Saturday afternoon at home. The weather is in the high 80's and some 50,000 loyal Tiger fans begin entering the friendly confines at Michigan and Trumbull.

The camera pans across the field to the dugout and focuses in on the dollar-filled fingers of Manager Houk, counting his take to the tune of our wallets singing . . . o