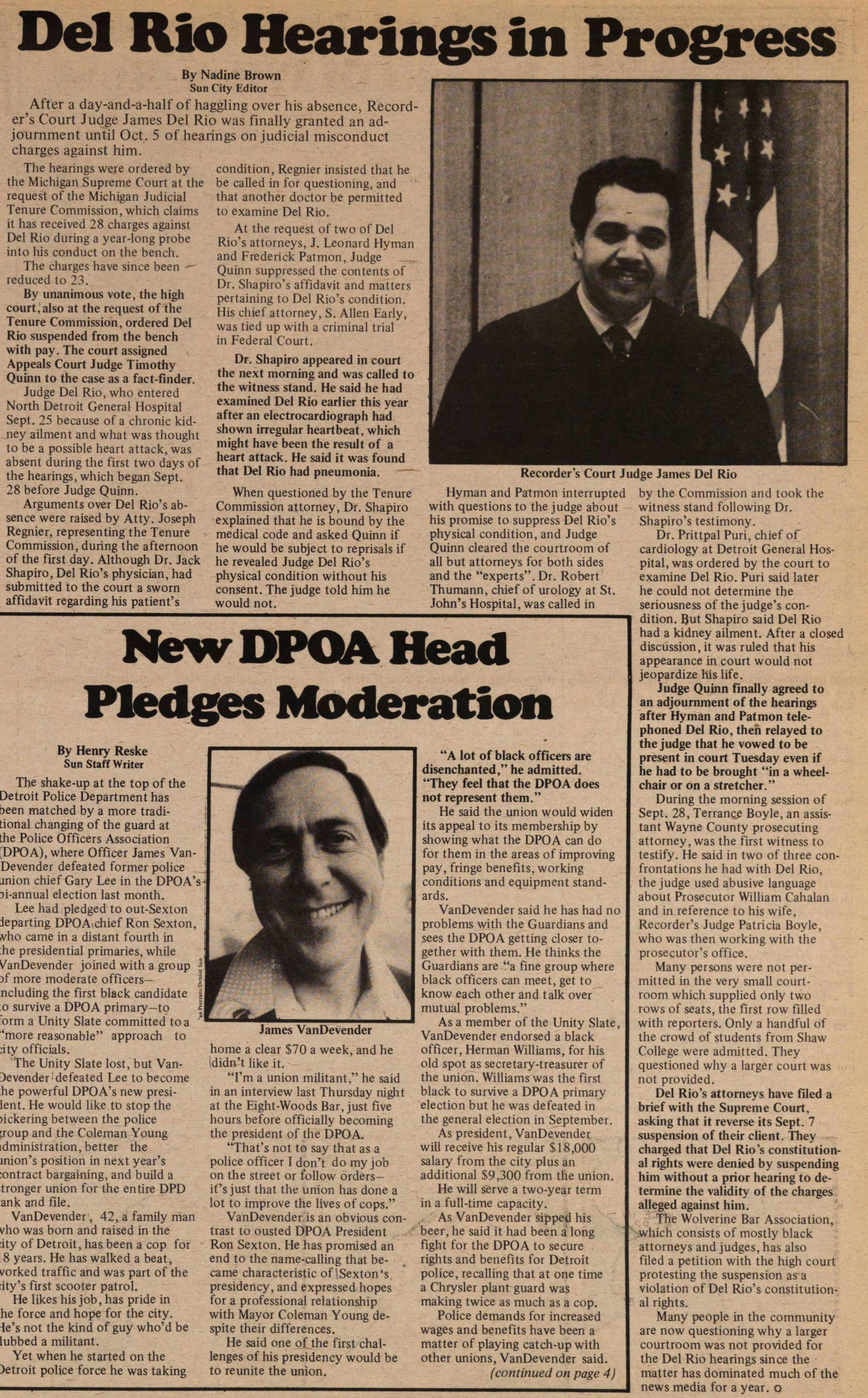 Sun City Editor After a day-and-a-half of haggling over his absence, Recorder's Court Judge James Del Rio was finally granted an adjournment until Oct. 5 of hearings on judicial misconduct charges against him. The hearings were ordered by the Michigan Supreme Court at the request of the Michigan Judicial Tenure Commission, which claims it has received 28 charges against Del Rio during a year-long probé into his conduct on the bench. The charges have since been - ■ reduced to 23. By unanimous vote, the high court, also at the request of the Tenure Commission, ordered Del Rio suspended from the bench with pay. The court assigned Appeals Court Judge Timothy Quinn to the case as a fact-fïnder. Judge Del Rio, who entered North Detroit General Hospital Sept. 25 because of a chronic kidney ailment and what was thought to be a possible heart attack, was absent during the first two days of the hearings, which began Sept. 28 before Judge Quinn. Arguments over Del Rio's absence were raised by Atty. Joseph Regnier, representing the Tenure Commission, during the afternoon of the first day. Although Dr. Jack Shapiro, Del Rio's physician, had submitted to the court a sworn affidavit regarding his patient's condition, Regnier insisted that he be called in for questioning, and that another doctor be permitted to examine Del Rio. At the request of two of Del Rio's attorneys, J. Leonard Hyman and Frederick Patmon, Judge Quinn suppressed the contents of Dr. Shapiro's affidavit and matters pertaining to Del Rio's condition. His cliief attorney, S. Allen Early, was tied up with a criminal trial in Federal Court. Dr. Shapiro appeared in court the next morning and was called to the witness stand. He said he had examined Del Rio earlier this year after an electrocardiograph had shown irregular heartbeat, which might have been the result of a heart attack. He said it was found that Del Rio had pneumonía. When questioned by the Tenure Commission attorney, Dr. Shapiro explained that he is bound by the medical code and asked Quinn if he would be subject to reprisals if he revealed Judge Del Rio's physical condition without his consent. The judge told him he would not. Hyman and Patmon interrupted with questions to the judge about his promise to suppress Del Rio's physical condition.and Judge Quinn cleared the courtroom of all but attorneys for both sides and the "experts". Dr. Robert Thumann, chief of urology at St. John's Hospital, was called in by the Commission and took the witness stand following Dr. Shapiro's testimony. Dr. Prittpal Puri, chief of cardiology at Detroit General Hospital, was ordered by the court to examine Del Rio. Puri said later he could not determine the seriousness of the judge's condition. Eut Shapiro said Del Rio had a kidney ailment. After a closed discussion, it was ruled that his appearance in court would not jeopardize his life. Judge Quinn finally agreed to an adjournment of the hearings after Hyman and Patmon telephoned Del Rio, tlien relayed to the judge that he vowed to be present in court Tuesday even f he had to be brought "in a wheelchair or on a stretcher." During the morning session of Sept. 28, Terrance Boyle, an assistant Wayne County prosecuting attorney, was the first witness to testify. He said in two of three confrontations he had with Del Rio, the judge used abusive language about Prosecutor William Cahalan and in reference to his wife, Recorder's Judge Patricia Boyle, who was then working with the prosecutor's office. Many persons were not permitted in the very small courtroom which supplied only two rows of seats, the first row filled with reporters. Only a handful of the crowd of students from Shaw College were admitted. They questioned why a larger court was not provided. Del Rio's attomeys have filed a brief with the Supreme Court, asking that it reverse its Sept. 7 suspension of their cliënt. They charged that Del Rio's constituí ional rights were denied by suspending him without a prior hearing to determine the validity of the charges alleged against him. The Wolverine Bar Association, which consists of mostly black attomeys and judges, has also filed a petition with the high court protesting the suspension as a violation of Del Rio's constitutional rights. Many people in the community are now questioning why a larger courtroom was not provided for the Del Rio hearings since the matter has dominated much of the news media for a year. o