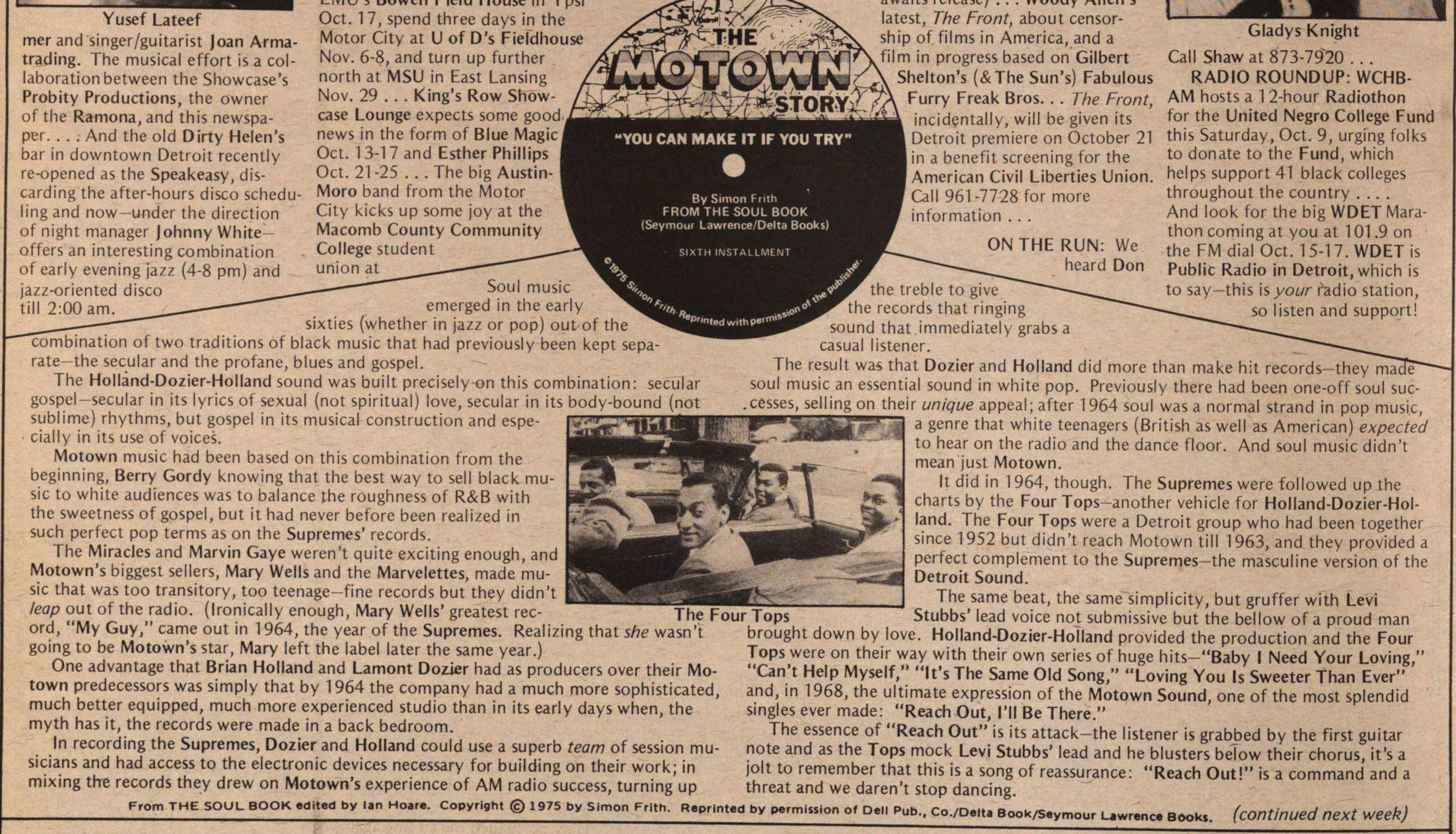 1 f Soul music emerged n the early sixties (whether in jazz or pop) out of the combination of two traditions of black music that had previously been kept separate-the secular and the profane, blues and gospel. The Holland-Dozier-Holland sound was built precisely on this combination: secular gospel -secular n its lyrics of sexual (not spiritual) love, secular in its body-bound (not sublime) rhythms, but gospel n ts musical construction and especially in its use of voices. Motown music had been based on this combination from the beginning, Berry Gordy knowing that the best way to sell black music to white audiences was to balance the roughness of R&B with the sweetness of gospel, but it had never before been realized in such perfect pop terms as on the Supremes' records. The Miracles and Marvin Gaye weren't quite exciting enough, and Motown's biggest sellers, Mary Wells and the Marvelettes, made music that was too transitory, too teenage-fine records but they didn't kap out of the radio. (Ironically enough, Mary Wells' greatest ord, My Guy, carne out n 1964, the year of the Supremes. Realizing that she wasn't going to be Motown's star, Mary left the label later the same year.) One advantage that Brian Holland and Lamont Dozier had as producers over their Motown predecessors was simply that by 1964 the company had a much more sophisticated, much better equipped, much more experienced studio than in its early days when, the myth has t, the records were made in a back bedroom. In recording the Supremes, Dozier and Holland could use a superb team of session musicians and had access to the electronic devices necessary for building on their work; in mixing thre records they drew on Motown's experience of AM radio success, turning up a the treble to give "- - ___ the records that ringing sound that immediately grabs a casual listener. _ The result was that Dozierand Holland did more than make hit records-theymacTë" - - soul music an essential sound in white pop. Previously there had been one-off soul suc.cesses, sellingon their unique appeal; after 1964 soul was a normal strand in pop music, a genre that white teenagers (British as well as American) expected to hear on the radio and the dance floor. And soul music didn't mean just Motown. It did in 1 964, though. The Supremes were followed up the charts by the Four Tops-another vehicle for Holland-Dozier-Holland. The Four Tops were a Detroit group who had been together since 1952 but didn't reach Motown till 1963, and they provided a perfect complement to the Supremes-the masculine version of the Detroit Sound. The same beat, the same simplicity, but gruffer with Levi Stubbs' lead voice not submissive but the bellow of a Droud man brought down by love. Holland-Dozier-Holland provided the production and the Four Tops were on their way with their own series of huge hits-"Baby I Need Your Loving," "Can't Help Myself," "U's The Same Oíd Song," "Loving You Is Sweeter Than Ever" and, in 1968, the ultímate expression of the Motown Sound, one of the most splendid singles ever made: "Reach Out, l'll Be There." The essence of "Reach Out" is ts attack-the listener is grabbed by the first guitar note and as the Tops mock Levi Stubbs' lead and he blusters beïow their chorus, it's a jolt to remember that this is a song of reassurance: "Reach Out!" is a command and a threat and we daren't stop dancing. FrOm E SOUL BOOK dite" "y "n COPyri8M O 1975 by Simon Frlth' R"'"'d "V Prmtnion of D.n Pub., Co.O.lt. BookS.ymoUr Lawr.nc B6ok,. (continued next week)