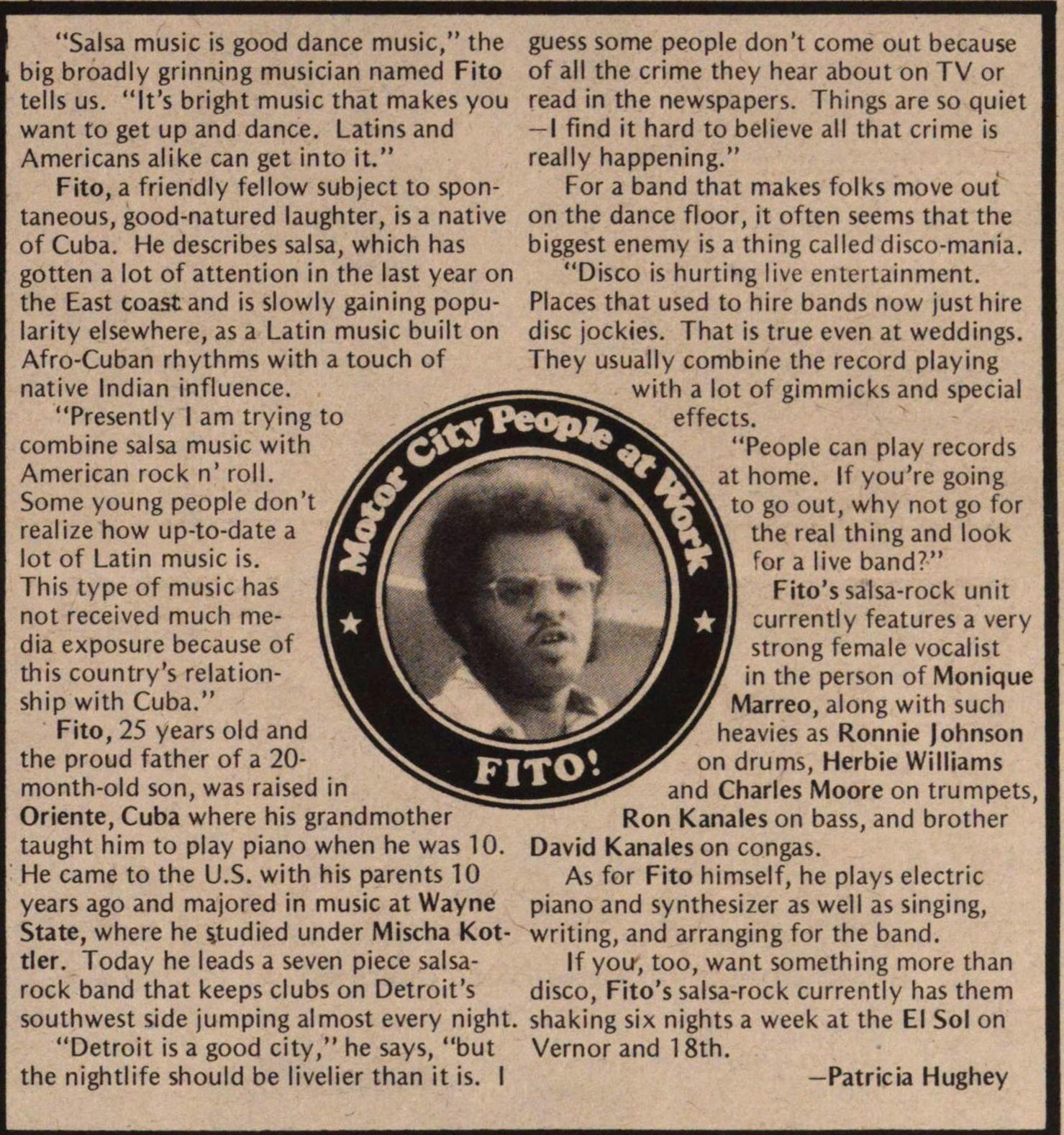 "Salsa music is good dance music," the big broadly grinning musician named Fito tel ts us. "It's bright music that makes you want to get up and dance. Latins and Americans alike can get into it." Fito, a friendly fellow subject to spontaneous, good-natured laughter, is a native of Cuba. He describes salsa, which has gotten a lot of attention in the last year on the East coastand is slowly gaining popularity elsewhere, as a Latin music built on Afro-Cuban rhythms with a touch of native Indian nfluence. Presently I am trying to combine salsa music with j. American rock n' roll. Some young people don't realize how up-to-date a i lot of Latín music is. ƒ This type of music has [I not received much media exposure because of this country's relationship with Cuba." Fito, 25 years oíd and the proud father of a month-old son. was raised n Oriente, Cuba where his grandmother taught him to play piano when he was 10. He carne to the U.S. with his parents 10 years ago and majored in music at Wayne State, where he s.tuded under Mischa Kottler. Today he leads a seven piece salsarock band that keeps clubs on Detroit's southwest side jumping al most every night, "Detroit is a good city," he says, "but the nightlife should be livelier than it is. I guess some people don 't come out because of all the crime they hear about on TV or read in the newspapers. Things are so quiet - I find it hard to believe all that crime is really happening." For a band that makes folks move out on the dance floor, it often seems that the biggest enemy is a thing called disco-mania. "Disco is hurting live entertainment. Places that used to hire bands now just hire disc jockies. That is true even at weddings. They usually combine the record playing with a lot of gimmicks and special s. ettects. "People can play records at home. If you're going to go out, why not go for the real thing and look ft for a live band?" Fito s salsa-rock unit I currently features a very ' strong female vocalist in the person of Monique f Marreo, along with such heavies as Ronnie lohnson on drums, Herbie Williams and Charles Moore on trurriDets. Ron Kanales on bass, and brother David Kanales on congas. As for Fito himself, he plays electric piano and synthesizer as well as singing, writing, and arranging for the band. If yoif, too, want something more than disco, Fito's salsa-rock currently has them shaking six nights a week at the El Sol on Vernor and 1 8th.