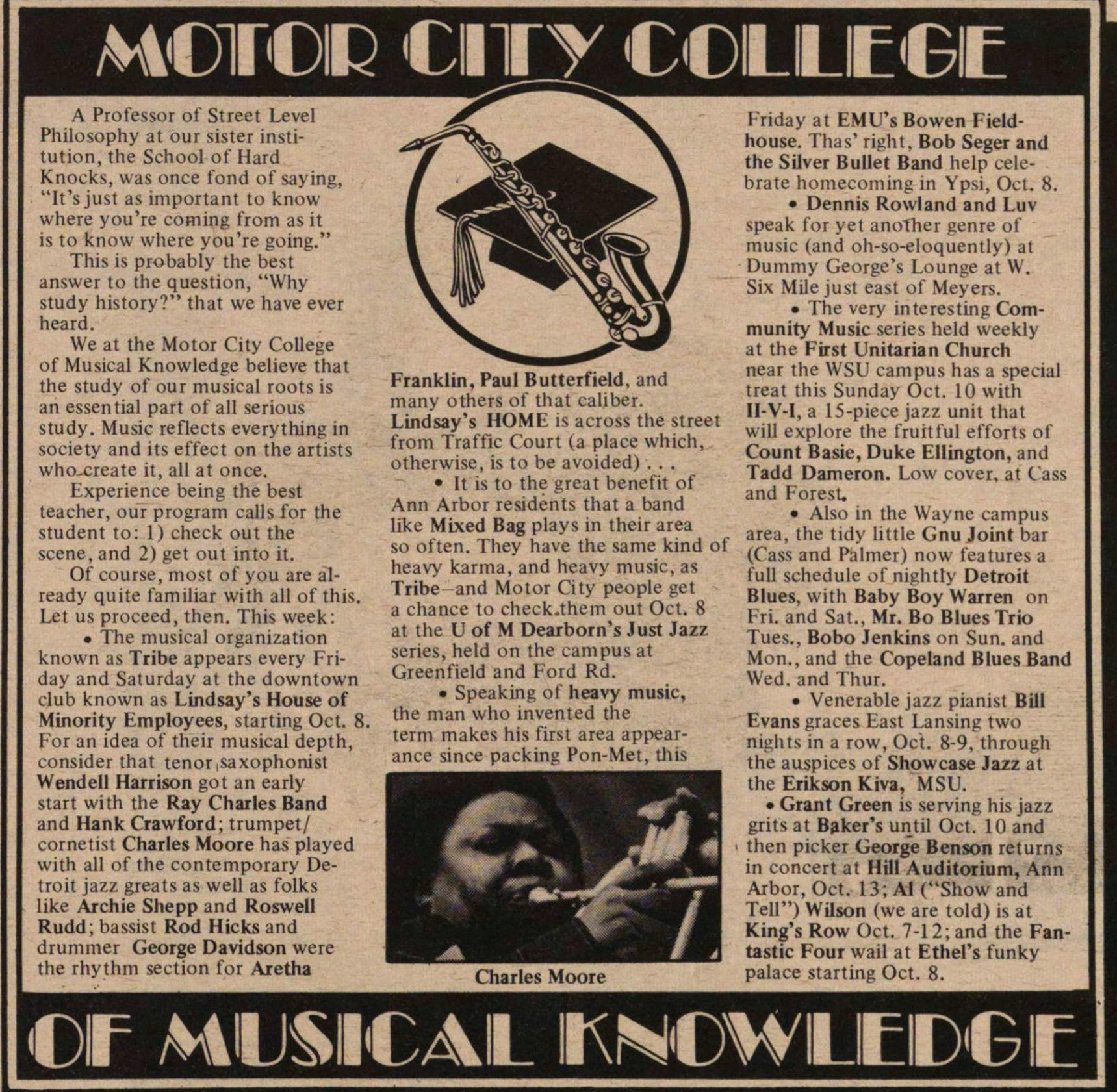 A Professor of Street Level Philosophy at our sister institution, the School of Hard Knocks, was once fond of saying, "It'sjust as important to know where you're coming from as it is to know where you're going." This is probably the best answer to the question, "Why study history?" that we have ever heard. We at the Motor City College of Musical Knowledge believe that the study of our musical roots is an essen tial part of all serious study. Music reflects everything in society and its effect on the artists who-create it, all at once. Experience being the best teacher, our program calis for the student to: 1) check out the scène, and 2) get out into it. Of course, most of you are already quite familiar with all of this. Let us proceed, then. This week: The musical organization known as Tribe appears every Friday and Saturday at the downtown club known as Lindsay's House of Minority Employees, starting Oct. 8. For an idea of their musical depth, consider that tenor (saxophonist Wendell Harrison got an early start with the Ray Charles Band and llank Crawford; trumpet cornetist Charles Moore has played with all of the contemporary Detroit jazz greats as well as folks like Archie Shepp and Koswell Rudd; bassist Rod Hicks and drummer George Davidson were the rhythm section for Aietha 1 ranklin, Paul Butterfield, and many others of that ealiber. Lindsay's HOME is across the street from Traffic Court (a place which, otherwise, is to be avoided) . . . It is to the great benefit of Ann Arbor residents that a band likc Mixed Bag plays in their area so often. They have the same kind of heavy karma, and heavy music.as Tribe and Motor City people get a chance to check.them out Oct. 8 at the U of M Dearborn's J ust Jazz series, held on the campus at Greenfield and Ford Rd. Speaking of heavy music, the man who invented the term makes his first area appearance since packing Pon-Met, this Friday at EML's Bowen Fieldhouse. Thas' right, Bob Seger and the Silver Bullet Band help celébrate homecoming in Ypsi, Oct. 8. Oennis Rowland and Luv speak for yet anoTher genre of music (and oh-so-eloquently) at Dummy George's Lounge at W. Six Milejust east of Meyers. The very interesting Community Music series held weekly at the First Unitarian Church near the WSU campus has a special treat this Sunday Oct. 10 with II-V-1, a 15-piece jazz unit that wiU explore the fruitful efforts of Count Basie, Duke Ellington, and Tadd Dameron. Low cover, at C'ass and ForesU Also in the Wayne campus area, the tidy little Gnu Joint bar (Cass and Palmer) now features a full schedule of nightty Detroit Blues, with Baby Boy Warren on Fri. and Sat., Mr. Bo Blues Trio Tues., Bobo Jenkins on Sun. and Mon., and the Copeland Blues Band Wed. and Thur. Venerable jazz pianist BUI Evans graces East Lansing two nights in a row, Oct. 8-9, through the auspices of Showcase Jazz at the Erikson Kiva, MSU. Grant Green is serving his jazz grits at Baker's until Oct. 10 and then pieker George Benson returns in concert at HUI Auditorium, Ann Arbor, Oct. 13; Al ("Show and Teil") WUson (we are told) is at King's Row Oct. 7-1 2; and the Fantastic Four wail at Ethel's funky palace starting Oct. 8.