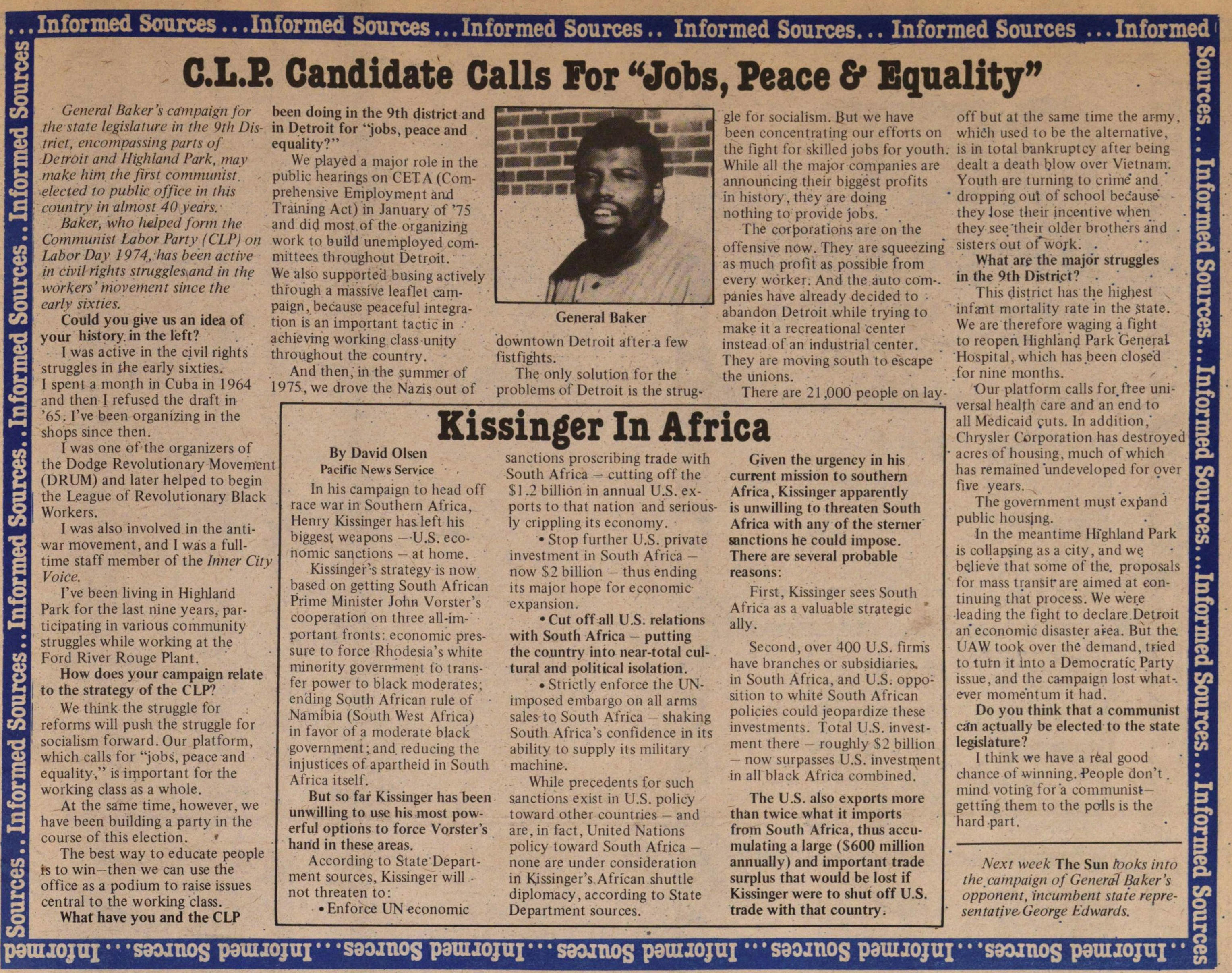 General Raker 's atmpaign for l the state legisla ture in the 9th i trict, enconïpassing parts of c Detroit and Highkmd Park, mar make liim thefirst communist ■electeJ to public office in rhis country in alinost 40 years. 1 Baker, who ludped form the a Communist iMbor Party (CLP) on v Labor Day 1 974, lias been active i in civil rights strugglesyand in the workers' nu remen t since the t earlv sixtics. p Could you give us an idea of t your history. in the lèft? . a I was active in the civil rights t struggles in the early sixties. I spent a month in Cuba in 1 964 i and tlicn I refused the draft in '65. I've been organizing in the shops since then. I was one of the organizers of the Dodge Revolutionary Movement (DRUM) and later helped to begin the League of Revolutionary Black Workers. I was also involved in the antiwar movement, and 1 was a fulltime staff member of the Inner City Voice. I've been living in Highland Park for the last nine years, participating in various community struggles while working at the Ford River Rouge Plant. How does your campaign relate to the strategy of the CLP? We think the struggle for reforms will push the struggle for socialism forward. Our platform, which calis for "jobs, peace and equality," is important for the working class as a whole. At the same time, however, we have been building a party in the course of this election. The best way to edúcate people fs to win- then we can use the office as a podium to raise issues central to the working class. What have you and the CLP been doing in the 9th district and in Detroit for "jobs, peace and equality?" We played a major role in the public hearings on 'CETA (Coniprehensive Ernployment and Training Act) in January of '75 and did most of the organizing work to build unemployed co.rnmittees throughout Detroit. We also supporied busing actively through a massive leaflet campaign, because peaceful integration is an important tactic in achieving working class unity throughout the country. And then, in the summer of 1975, we drove the Nazis out of downtown Detroit at'tera few fistfiglits. The only solution tor the problems of Detroit is the gle for socialism. gut we have been concentrating our efforts on tlie fight tbr skilied jobs for youth. While all the major eompanies are announcing their biggest profits in histoiy, they are doing notliing to provide jobs. ' The corporationsare on tlie ofïensive now. They are squeezing as rrtucb, piofit as possible from every wórker. And the auto com-. panies have already decided to ■ abandon Detroit while trying to make it a recreational center instead of an industrial center. They are moving south toescape the unions. There are 21 ,000 people on off but at the same time the ar-my, which used to be the altemative, is in total bcinkruptcy attej being dealt a death b.low over Vietnam. Youth are turning to crime and.' dropping out of scliool becausethey José their incentive when tliey seetheü older brothers and . sisters out ofwoyki VVhat are the major struggles in the 9th District? . _" This district lias the higliest infartt mortality rate in the state. We are therefore waging a fight to reopen Highland Park General Hospital, which has been closed for nine months. Our platform calis for.free universal health care and an end to all Medicaid puts. In addition,' Chrysler Corporation has destroyed acres of housing, much of which has remained undeveloped for over five years. The government must expand public housjng. In the meantime Hfghland Park is collapsing as a city, and we bejieve that some of the. proposals for mass transir are aimed at eontinuing that process. We were leading the fight to declare. Detroit an" economie disaster atea. But the. UAW took over the demand, tried to turn it into a Democratie Party issue, and the ea-mpaign lost whatever momentum it had. Do you think that a communist can actualiy be elected to the state legislatura? 1 think we have a rèal good chance of winning. People don't . mind voting fora communist- gettihg them to the pcrlls is the hard part. Next weck The Sun ttmks into the campaign of General Baker's opponent, incumbent state representative-George t'dwards. j rrrT7?T?7TT?TIBlXTTTT'rF7MTTT?w i ia Frlrr vligTéTT' 'rTTTT""T?' TT"4 'i Ji j 4 t r m i,' i jw"IJIy"W"TrT"T'JTTynTrrTTttTV1-"'1 ÏT1TmiTTWÏ7fy!t'mFymWmmit'rTmTTW T