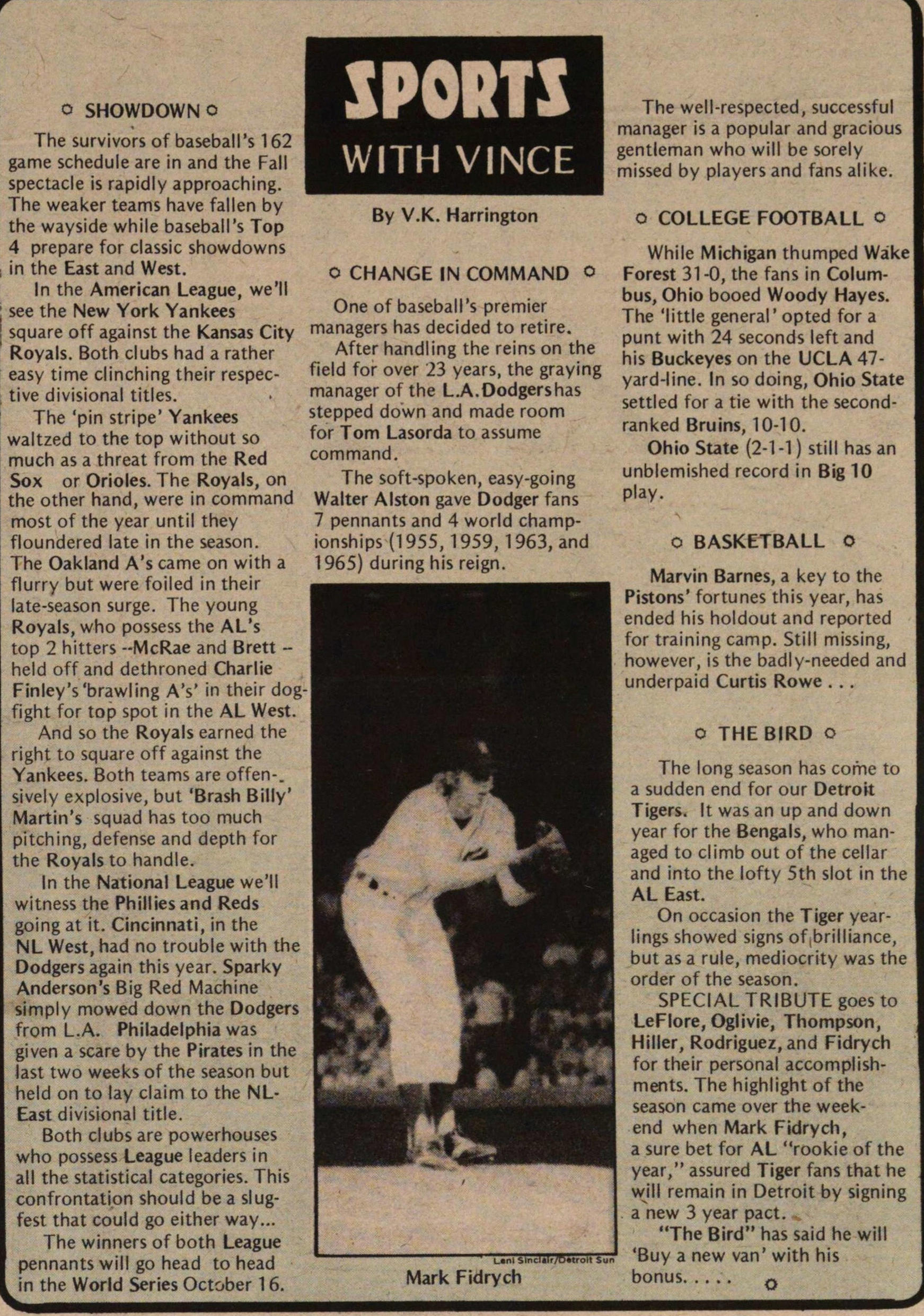 o SHOWDOWNO The survivors of baseball's 162 I game schedule are in and the Fall spectacle s rapidly approaching. The weaker teams have fallen by the wayside while baseball's Top 4 prepare for classic showdowns n the East and West. In the American League, we'll see the New York Yankees square off against the Kansas City Royáis. Both clubs had a rather easy time clinching their respective divisional titles. The 'pin stripe' Yankees waltzed to the top without so much as a threat from the Red Sox or Orioles. The Royáis, on the other hand, were in command most of the year until they floundered late in the season. The Oakland A's came on with a flurry but were foiled n their late-season surge. The young Royáis, who possess the AL's top 2 hitters --McRae and Brett - held off and dethroned Charlie Finley's'brawling A's' in their dogfight for top spot in the AL West. And so the Royáis earned the right to square off against the Yankees. Both teams are offen-. sively explosive, but 'Brash Billy' Martin's squad has too much pitching, defense and depth for the Royáis to handle. In the National League we'll witness the Phiiliesand Reds going at it. Cincinnati, in the NL West, had no trouble with the Dodgers again this year. Sparky Anderson's Big Red Machine simply mowed down the Dodgers from L.A. Philadelphia was given a scare by the Pirates in the last two weeks of the season but held on to lay claim to the NLEast divisional title. Both clubs are powerhouses who possess League leaders in all the statistical categories. This confrontaron should be a slugfest that could go either way... The winners of both League pennants will go head to head in the World Series October 1 6. o CHANGE IN COMMAND O One of baseball's premier managers has decided to retire. After handling the reins on the field for over 23 years, the graying manager of the L.A.Oodgershas stepped down and made room for Torn Lasorda to assume command. The soft-spoken, easy-going Walter Alston gave Dodger fans 7 pennants and 4 world championships (1955, 1959, 1963, and 1965) during his reign. I The well-respected, successful manager is a popular and gracious gentleman who will be sorely missed by players and fans alike. O COLLEGE FOOTBALL o While Michigan thumped Wáke Forest 31-0, the fans in Columbus, Ohio booed Woody Hayes. The 'little general' opted for a punt with 24 seconds left and his Buckeyes on the UCLA 47yard-line. In so doing, Ohio State settled for a tie with the secondranked Bruins, 10-10. Ohio Sute (2-1 -1 ) still has an unblemished record in Big 10 play. o BASKETBALL O Marvin Barnes, a key to the Pistons' fortunes this year, has ended his holdout and reponed for training camp. Still missing, however, is the badly-needed and underpaid Curtis Rowe . . . O THEBIRD o The long season has come to a sudden end for our Detroit Tigers. It was an up and down year for the Bengals, who managed to climb out of the cellar and into the lofty 5th slot in the AL East. On occasion the Tiger yearlings showed signs of,brilliance, but as a rule, mediocrity was the order of the season. SPECIAL TRIBUTE goesto LeFlore, Oglivie, Thompson, Hiller, Rodríguez, and Fidrych for their personal accomplishments. The highlight of the season carne over the weekend when Mark Fidrych, a sure bet for AL "rookie of the year," assured Tiger fans that he will remain in Detroit by signing a new 3 year pact. "The Bird" has said he will 'Buy a new van' with his bonus 0