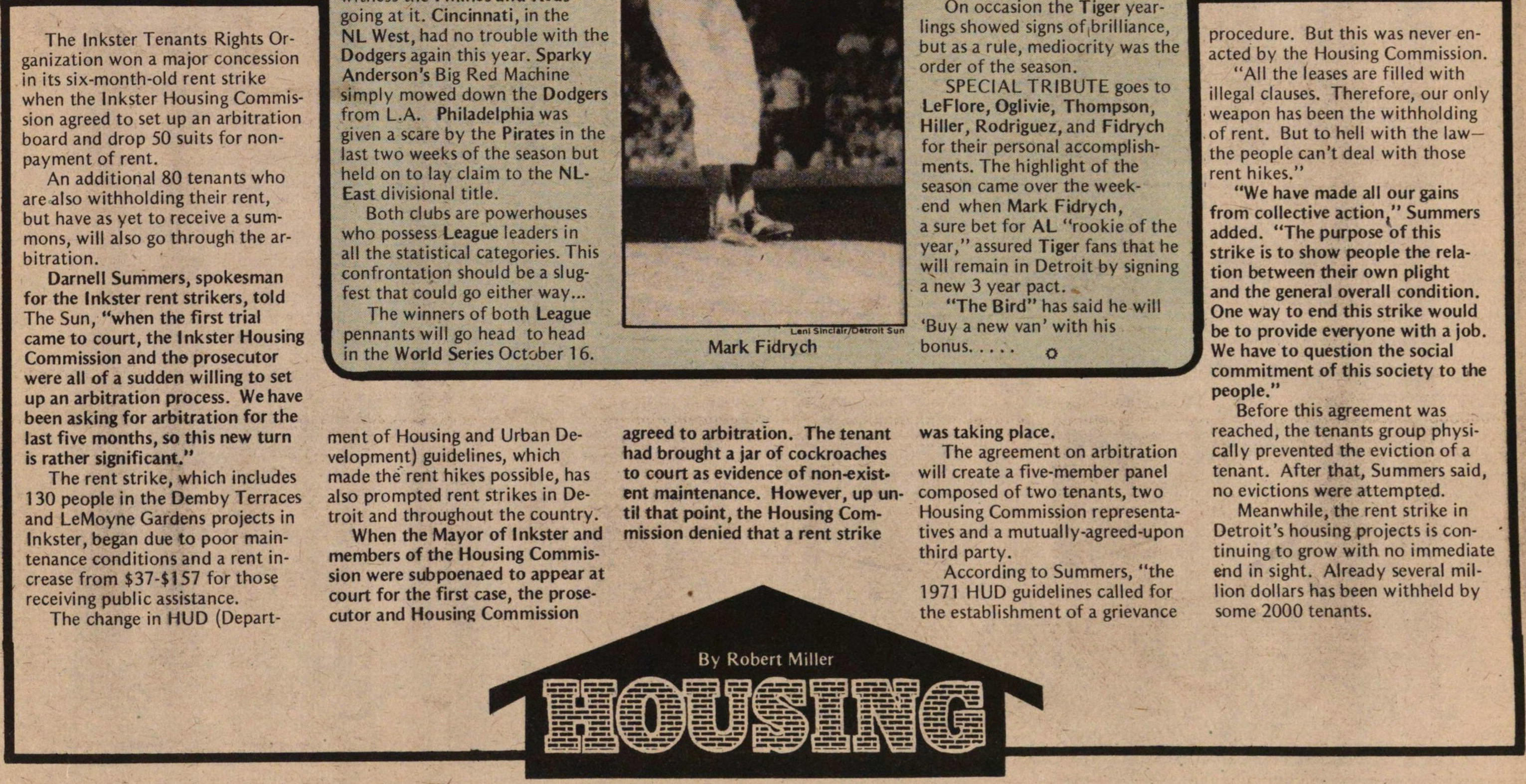 The Inkster Tenants Rights Organization won a major concession n its six-month-old rent strike when the Inkster HousingCommission agreed to set up an arbitration board and drop 50 suits for nonpayment of rent. An additional 80 tenants who are also withholding their rent, but have as yet to receive a summons, will also go through the arbitration. Darnell Summers, spokesman for the Inkster rent strikers, told The Sun, "when the first trial came to court, the Inkster Housing Commission and the prosecutor were all of a sudden willing to set up an arbitration process. We have been asking for arbitration for the last five months, so this new turn is rather significant." The rent strike, which includes 1 30 people in the Demby Terraces and LeMoyne Gardens projects in Inkster, began due to poor maintenance conditions and a rent increase from $37-$157 for those receiving public assistance. The change in HUD ment of Housing and Urban Development) guidelines, which made the rent hikes possible, has also prompted rent strikes in Detroit and throughout the country. When the Mayor of Inkster and members of the Housing Commission were subpoenaed to appear at court for the first case, the prosecutor and Housing Commission agreed to arbitration. The tenant had brought a jar of cockroaches to court as evidence of non-existent maintenance. However, up until that point, the Housing Commission denied that a rent strike was taking place. The agreement on arbitration will créate a five-member panel composed of two tenants, two Housing Commission representatives and a mutually-agreed-upon third party. According to Summers, "the 1971 HUDguidelinescalledfor the establishment of a grievance procedure. But this was never enIacted by the Housing Commission. "All the leases are filled with Ilegal clauses. Therefore, our only weapon has been the withholding of rent. But to heil with the law- the people can't deal with those rent hikes." "We have made all our gains from collective actiont" Summers added. "The purpose of this strike is to show people the relation between their own plight and the general overall condition. One way to end this strike would be to provide everyone with a job. We have to question the social commitment of this society to the people." Before this agreement was reached, the tenants group physically prevented the eviction of a tenant. After that, Summers said, no evictions were attempted. Meanwhile, the rent strike in Detroit 's housing projects is ■ tinuing to grow with no immediate end in sight. Already several million dollars has been withheld by some 2000 tenants.