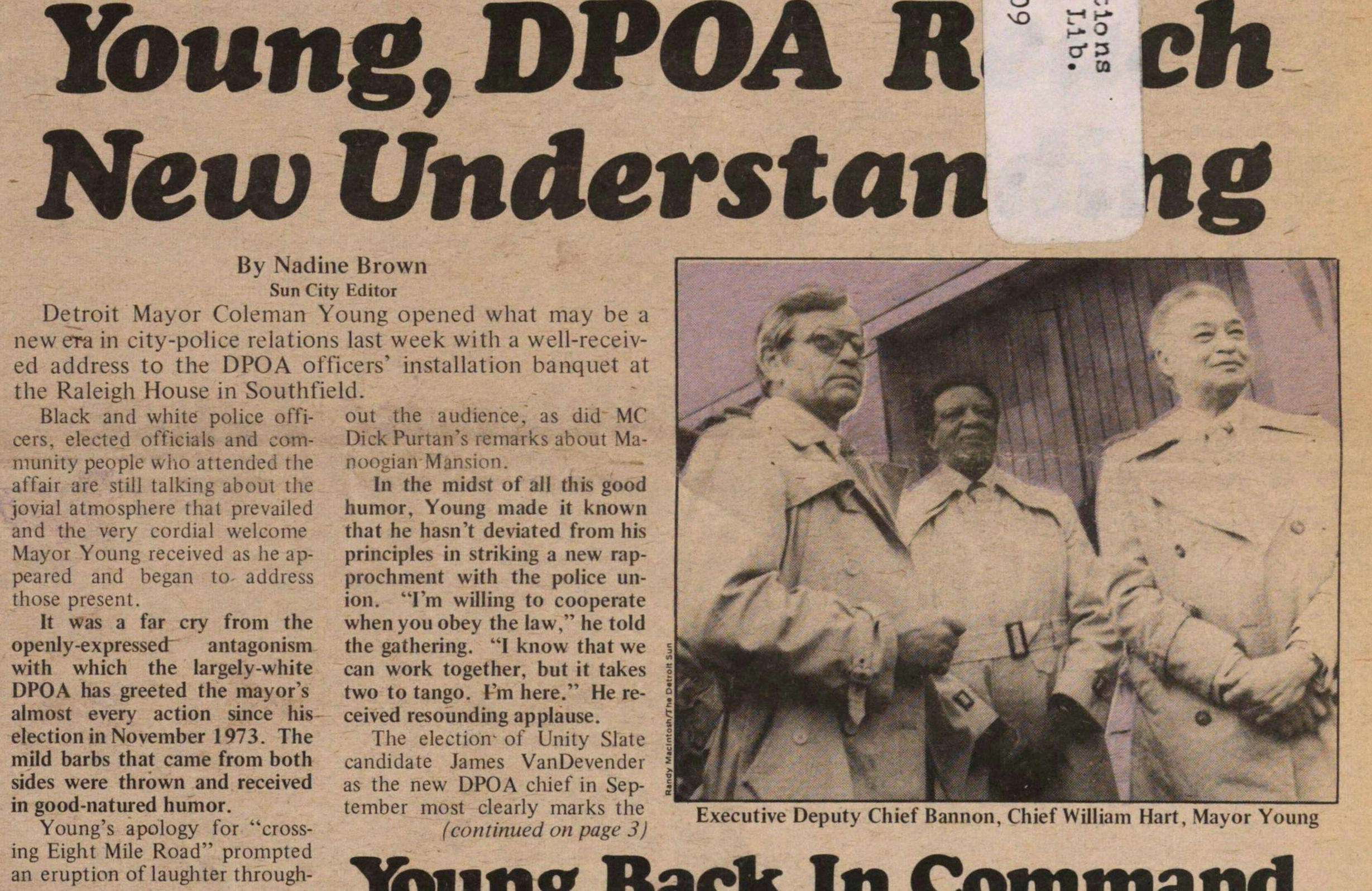 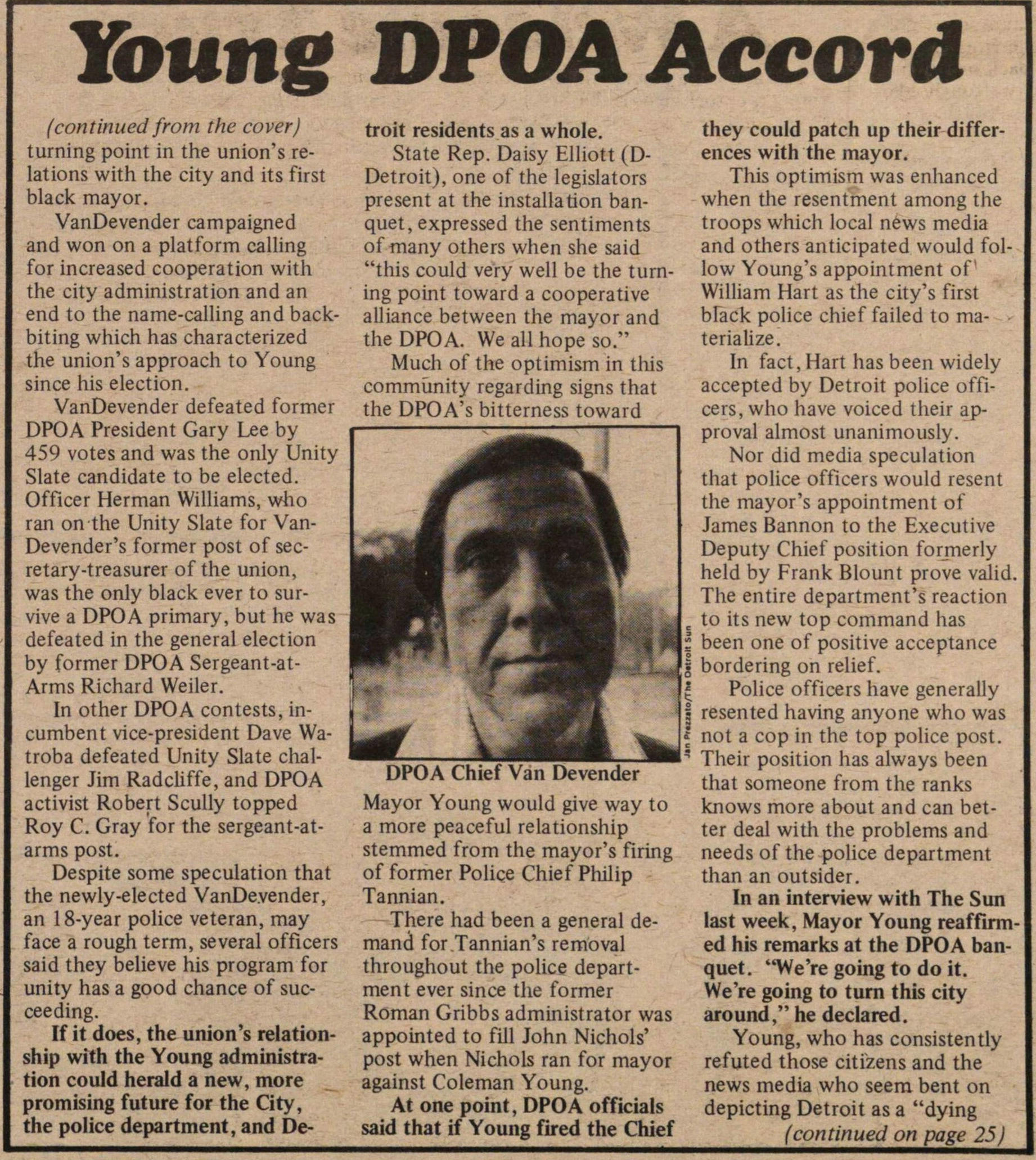 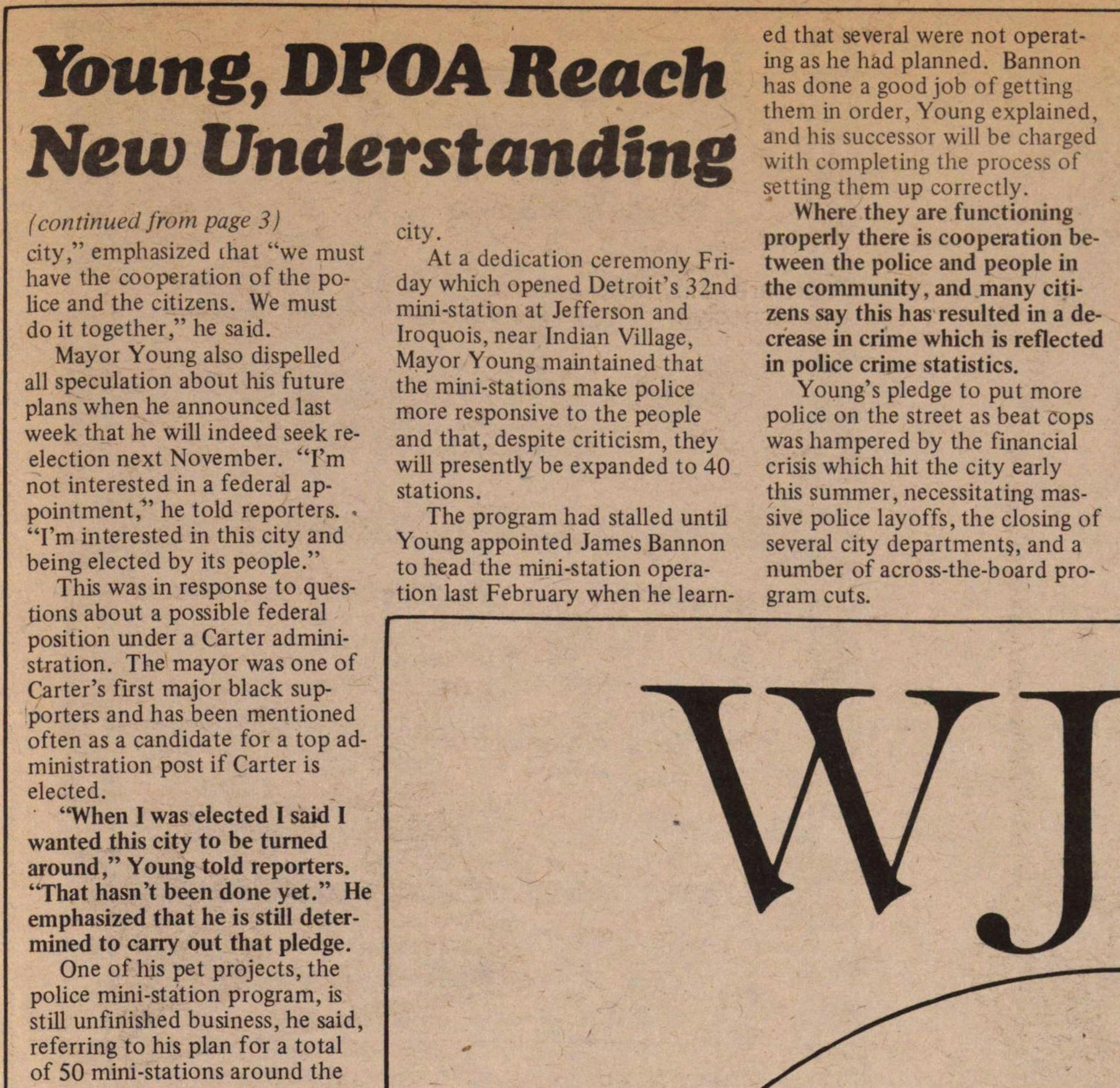 Detroit Mayor Coleman Young opened what may be a new era in city-police relations last week with a well-received address to the DPOA officers' installation banquet at the Raleigh House in Southfield.

Black and white police officers, elected officials and community people who attended the affair are still talking about the jovial atmosphere that prevailed and the very cordial welcome Mayor Young received as he appeared and began to address those present.

It was a far cry from the openly-expressed antagonism with which the largely-white DPOA has greeted the mayor's almost every action since his election in November 1973. The mild barbs that came from both sides were thrown and received in good-natured humor.

Young's apology for "crossing Eight Mile Road" prompted an eruption of laughter throughout the audience, as did MC Dick Purtan's remarks about Manoogian Mansion.

In the midst of all this good humor, Young made it known that he hasn't deviated from his principles in striking a new rapprochment with the police union. "I'm wilIing to cooperate when you obey the law," he told the gathering. "I know that we can work together, but it takes two to tango. I'm here." He received resounding applause.

Young DPOA Accord (continued from the cover) turning point in the union's relations with the city and its first black mayor.

VanDevender campaigned and won on a platform calling for increased cooperation with the city administration and an end to the name-calling and backbiting which has characterized the union's approach to Young since his election.

VanDevender defeated former DPOA President Gary Lee by 459 votes and was the only Unity Slate candidate to be elected. Officer Herman Williams, who ran on the Unity Slate for VanDevender's former post of secretary-treasurer of the union, was the only black ever to survive a DPOA primary, but he was defeated in the general election by former DPOA Sergeant-at-Arms Richard Weiler.

Despite some speculation that the newly-elected VanDevender, an 18-year police veteran, may face a rough term, several officers said they believe his program for unity has a good chance of succeeding.

If it does, the union's relationship with the Young administration could herald a new, more promising future for the City, the police department, and Detroit residents as a whole.

State Rep. Daisy Elliott (D-Detroit), one of the legislators present at the installation banquet, expressed the sentiments of many others when she said "this could very well be the turning point toward a cooperative alliance between the mayor and the DPOA. We all hope so."

Much of the optimism in this community regarding signs that the DPOA's bitterness toward Mayor Young would give way to a more peaceful relationship stemmed from the mayor's firing of former Police Chief Philip Tannian.

There had been a general demand for Tannian's removal throughout the police department ever since the former Roman Gribbs administrator was appointed to fill John Nichols' post when Nichols ran for mayor against Coleman Young.

At one point, DPOA officials said that if Young fired the Chief they could patch up their differences with the mayor.

This optimism was enhanced when the resentment among the troops which local news media and others anticipated would follow Young's appointment of' William Hart as the city's first black police chief failed to materialize.

In fact, Hart has been widely accepted by Detroit police officers, who have voiced their approval almost unanimously.

Nor did media speculation that police officers would resent the mayor's appointment of James Bannon to the Executive Deputy Chief position formerly held by Frank Blount prove valid. The entire department's reaction to its new top command has been one of positive acceptance bordering on relief.

Police officers have generally resented having anyone who was not a cop in the top police post. Their position has always been that someone from the ranks knows more about and can better deal with the problems and needs of the police department than an outsider.

In an interview with The Sun last week, Mayor Young reaffirmed his remarks at the DPOA banquet. "We're going to do it. We 're going to turn this city around," he declared.

Young, who has consistently refuted those citizens and the news media who seem bent on depicting Detroit as a "dying

city," emphasized that "we must have the cooperation of the police and the citizens. We must do it together," he said.

Mayor Young also dispelled all speculation about his future plans when he announced last week that he will indeed seek re-election next November. "I'm not interested in a federal appointment" he told reporters. "I'm interested in this city and being elected by its people."

This was in response to questions about a possible federal position under a Carter administration. The mayor was one of Carter's first major black supporters and has been mentioned often as a candidate for a top administration post if Carter is elected.

"When I was elected I said I wanted this city to be turned around," Young told reporters. "That hasn't been done yet." He emphasized that he is still determined to carry out that pledge.

One of his pet projects, the police mini-station program, is still unfinished business, he said, referring to his plan for a total of 50 mini-stations around the city.

At a dedication ceremony Friday which opened Detroit's 32nd mini-station at Jefferson and Iroquois, near Indian Village, Mayor Young maintained that the mini-stations make police more responsive to the people and that, despite criticism, they will presently be expanded to 40 stations.

The program had stalled until Young appointed James Bannon to head the mini-station operation last February when he learned that several were not operating as he had planned. Bannon has done a good job of getting them in order, Young explained, and his successor will be charged with completing the process of setting them up correctly.

Where they are functioning properly there is cooperation between the police and people in the community, and many citizens say this has resulted in a decrease in crime which is reflected in police crime statistics.

Young's pledge to put more police on the street as beat cops was hampered by the financial crisis which hit the city early this summer, necessitating massive police layoffs, the closing of several city departments, and a number of across-the-board program cuts.