Young Back In Command As Dea Probe Sputters 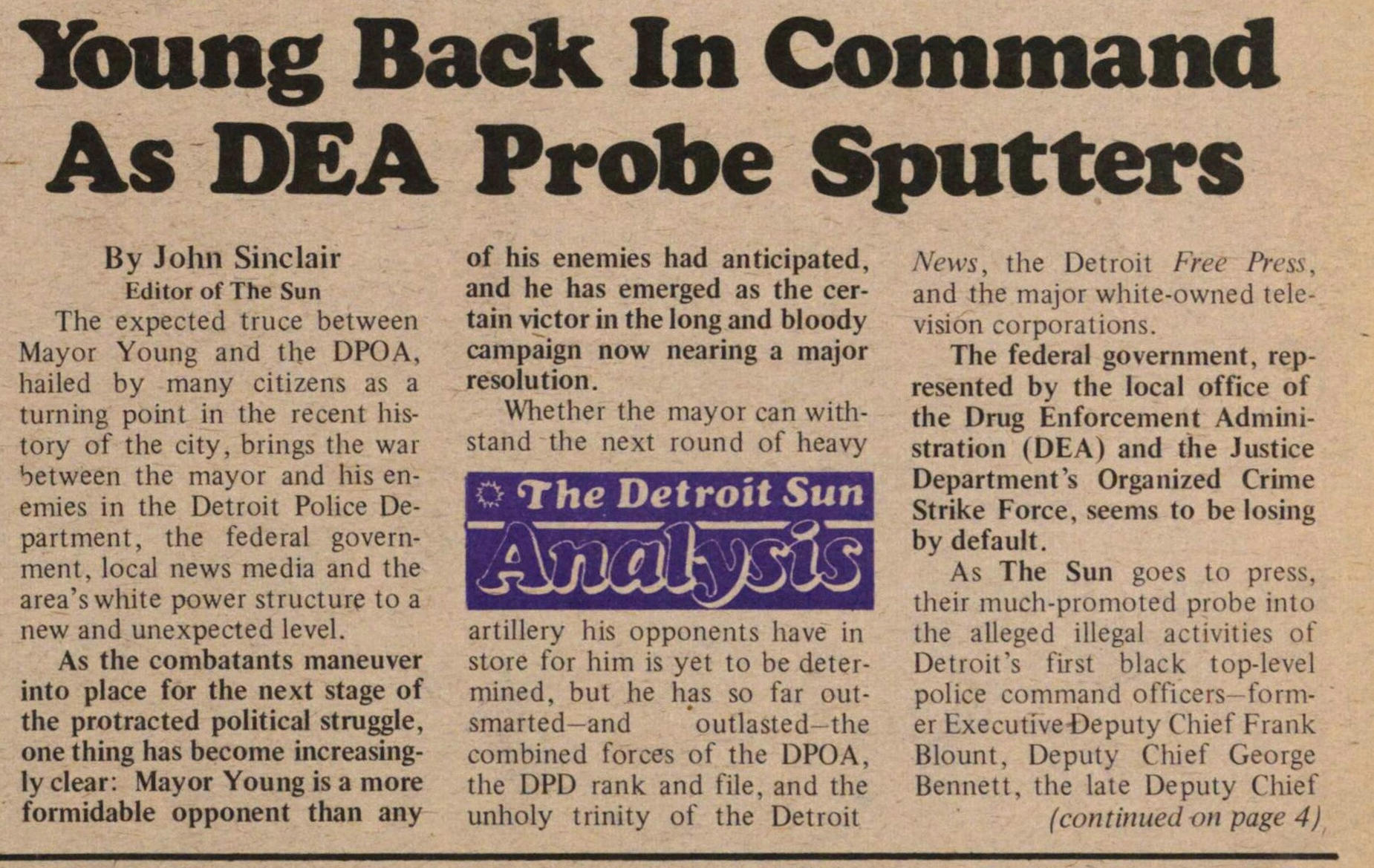 Editor of The Sun The expected truce between Mayor Young and the DPOA, hailed by many citizens as a turning point in the recent history of the city, brings the war between the mayor and his enemies in the Detroit Pólice Department, the federal government, local news media and the area's white power structure to a new and unexpected level. As the combatants maneuver into place for the next stage of the protracted political struggle, one thing has become increasingly clear: Mayor Young ís a more formidable opponent than any of liis enemies had anticipated, and he has emerged as the certain victor in the long and bloody campaign now nearing a major resol ut ion. Whether the mayor can withstand the next round of heavy artillery his opponents have in store for him is yet to be determined, but he has so far outsmarted- and outiasted-the combined forces of the DPOA, the DPD rank and file, and the unholy trinity of the Detroit News, the Detroit Vree Press, and the major white-owned televisión corporations. The federal government, represented by the local office of the Drug Enforcement Administration (DEA) and the Justice Department 's Organized Crime Strike Forcé, seems to be losing by default. As The Sun goei to press, their much-promoted probe into the alleged illegal activities of Detroit's first black top-level pólice command officers- former Executive-Deputy Cliief Frank Blount, Deputy Chief George Bennen, the late Deputy Chief (continued on page 4) Ibung Back In Command (continued from the cover) Reginald Harvel, and Inspector John A. Henry- has so far resulted in nothing more than a barrage of wildly contradictory slanders in the daily newspapers, the murder or suicide of Harvel, and not one single indictment. A steady stream of explosive information has flowed from the DEAJustice Dept. headquarters in the local Federal Building to reporters for both Detroit dailies, while the city administration has been told that it cannot be briefed on the investigation due to "departmental regulations." That this information is constantíy changing belies the desperation of the federal authorities as they attempt to play out their central role in the character assassination of the city's black leadership. One day a character named Willie Volsan is reported to be "singing" to the DEA and its grand jury panel, but three days later he is quoted by the same reporter as having never even talked to DEA investigators, let alone testifïed to the grand jury. Prominent citizens are cited one week as objects of the probe Pólice Commissioner Ed Littlejohn is the most grievous example-while the next week they are identified as not being involved in any way. Flurries of investigative activity are breathlessly reported for days in a row, then more days ' go by without a peep from the papers. Charges are bandied about, dropped, revived, altered, with never a word of apology and rarely even a notice that something different was claimed a day or two before. But the DEA probe is finally only one tactical component of the overall plan of attack, and it is most instructive to consider the DEA action in the context of the wider strategie picture. Of course Mayor Young has been bitterly opposed by the forces cited above ever since he declared his intention to run for the city's top office, and his tenure has been marked by an increasingly coordinated assault on his ability to manage the affairs of the city. The constant sniping by the pólice and the white media which has plagued Young since 1973 has been augmented by an all-out effort by the Nixon-Ford gang in Washington, who have developed their racist "benign neglect" program to a fine art in Detroit. Federal funding cut-offs for every progressive program of the Kennedy- Johnson years, the government's nearly successful attempt to bar CETA funding for the mayor's affirmative action program, its collaboration in the illegal red-lining practices of many federally-guaranteed Detroit banks, and- since August 20 -its active participation in the character assassination campaign: in each of these ways,nd more, the Republican administration in Washington has added to the ever-increasing problems of the city and its progressive black leadership. But Young has struggled through these killing blows like a champ, retaining the support of the black-majority electorate all the way- at least until this