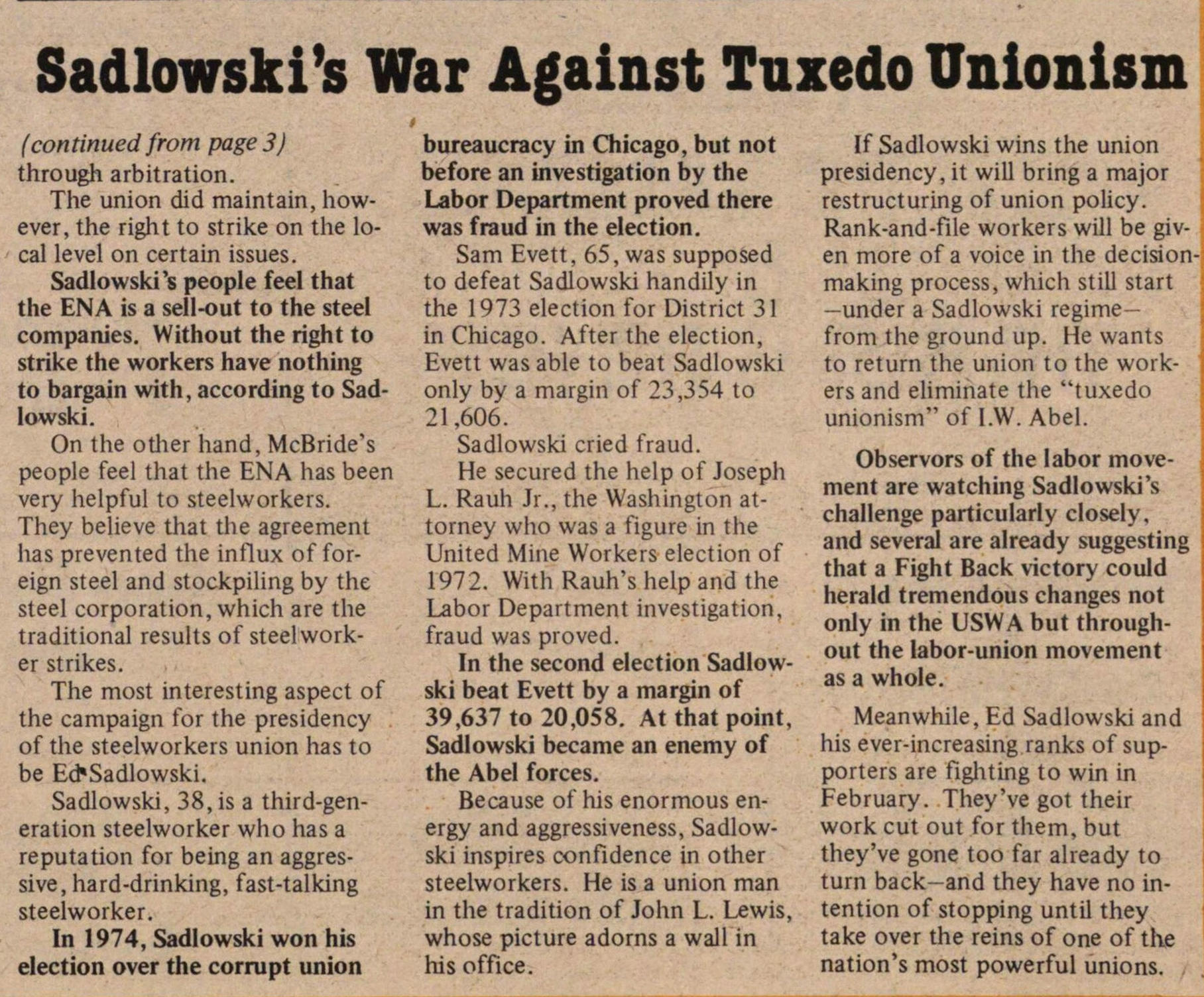 There's a war going on within the ranks of the United Steel Workers of America (USWA)-a clash between the forces of the old and the new which promises to carry the 1,376,000-member union in a new direction.

Facing one another in what promises to be a hard and bitter fight for the presidency of the USWA in February are Ed Sadlowski of Steelworkers Fight Back, representing the progressive forces, and old-Iiner Lloyd McBride, a protege of long-time USWA president I.W. Abel.

The war has already resulted in some serious casualties for the Fight Back movement. On July 26 a Sadlowski supporter, Ben Corum , was shot and wounded in front of the Hughes Tool Company in Houston, Texas where he was passing out leaflets for Sadlowski. Other steelworkers around the country have suffered violent reprisals for their support of the Fight Back faction of the USWA.

Steelworkers Fight Back began in November, 1974 after Sadlowski won the directorship of District 31 in the Chicago area, with 128,000 members the largest local in the union.

The stunning upset victory by Sadlowski gave his supporters new hope for a change in the steelworkers' union, and the popular young agitator entered his name in the race for the USWA presidency.

As the Fight Back people see it, the main issues in the union race are inequity in union dues, the right of all members to vote on contracts, and the right to strike.

Sadlowski has also promised more far-reaching changes in current union policy: roll-call votes at conventions, tougher lines in contract negotiations, the right of safety committeemen to shut down plants that have hazardous working conditions, and a shorter work-week for steelworkers.

Conversely, Lloyd McBride and his backers feel that the main issues are "responsibility and the trust of the membership."

One of the hottest issues of the campaign is the right of workers to engage in national strikes against the steel-manufacturing corporations.

The union did maintain, however, the right to strike on the local level on certain issues.

Sadlowski's people feel that the ENA is a sell-out to the steel companies. Without the right to strike the workers have nothing to bargain with, according to Sadlowski.

On the other hand, McBride's people feel that the ENA has been very helpful to steelworkers. They believe that the agreement has prevented the influx of foreign steel and stockpiling by the steel corporation, which are the traditional results of steel worker strikes.

The most interesting aspect of the campaign for the presidency of the steelworkers union has to be Ed Sadlowski.

Sadlowski, 38, is a third-generation steelworker who has a reputation for being an aggressive, hard-drinking, fast-talking steelworker.

In 1974, Sadlowski won his election over the corrupt union bureaucracy in Chicago, but not before an investigation by the Labor Department proved there was fraud in the election.

He secured the help of Joseph L. Rauh Jr., the Washington attorney who was a figure in the United Mine Workers election of 1972. With Rauh's help and the Labor Department investigation, fraud was proved.

In the second election Sadlowski beat Evett by a margin of 39,637 to 20,058. At that point, Sadlowski became an enemy of the Abel forces.

Because of his enormous energy and aggressiveness, Sadlowski inspires confidence in other steelworkers. He is a unión man in the tradition of John L. Lewis, whose picture adorns a wall in his office.

If Sadlowski wins the union presidency, it will bring a major restructuring of union policy. Rank-and-file workers will be given more of a voice in the decision-making process, which still start - under a Sadlowski regime- from the ground up. He wants to return the union to the workers and eliminate the "tuxedo unionism" of I.W. Abel.

Observors of the labor movement are watching Sadlowski's challenge particularly closely, and several are already suggesting that a Fight Back victory could herald tremendous changes not only in the USWA but throughout the labor-union movement as a whole.

Meanwhile, Ed Sadlowski and his ever-increasing ranks of supporters are fighting to win in February. They've got their work cut out for them, but they've gone too far already to turn back- and they have no intention of stopping until they take over the reins of one of the nation's most powerful unions.