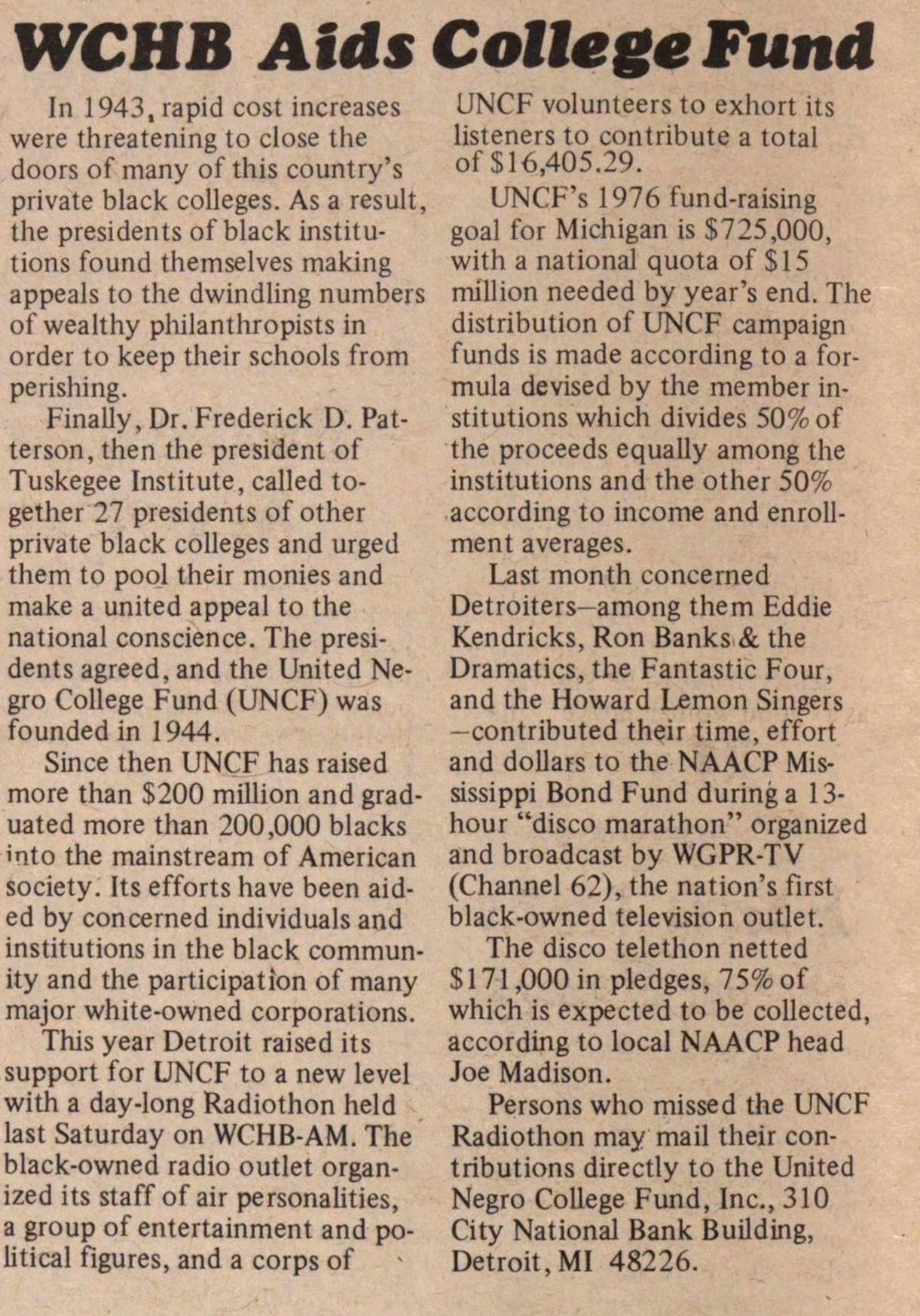 In 1943, rapid cost increases were threatening to close the doors of many of this country's private black colleges. As a result, the presidents of black institutions found themselves making appeals to the dwindling numbers of wealthy philanthropists in order to keep their schools from perishing. Finally, Dr. Frederick D. Patterson, dien the president of Tuskegee Institute, called together 27 presidents of other private black colleges and urged them to pool their monies and make a united appeal to the national conscience. The presidents agreed, and the United Negro College Fund (UNCF) was founded in 1944. Since then UNCF has raised more than $200 million and graduated more than 200,000 blacks 'oto the mainstream of American society. lts efforts have been aided by concerned individuals and institutions in the black community and the participation of many major white-owned corporations. This year Detroit raised its support for UNCF to a new level with a day-long Radiothon held last Saturday on WCHB-AM. The black-owned radio outlet organized its staff of air personalities, a group of entertainment and political figures, and a corps of UNCF volunteers to exhort its listeners to contribute a total of $16,405.29. UNCF'sl976fund-raising goal for Michigan is $725,000, with a national quota of $15 míllion needed by year's end. The distribution of UNCF campaign funds is made according to a formula devised by the member institutions which divides 50% of the proceeds equally among the institutions and the other 50% according to income and enrollment averages. Last month concerned Detroiters- among them Eddie Kendricks, Ron Banks & the Dramatics, the Fantastic Four, and the Howard Lemon Singers - contributed their time, effort and dollars to the NAACP Mississippi Bond Fund duringa 13hour "disco marathon" organized and broadcast by WGPR-TV (Channel 62), the nation's first black-owned televisión outlet. The disco telethon netted $171,000 in pledges, 75% of which is expected to be collected, iccording to local NAACP head Joe Madison. Persons who misse d the UNCF Radiothon may mail their contributions directly to the United Negro College Fund, Inc., 310 City National Bank Building, Detroit, MI 48226.