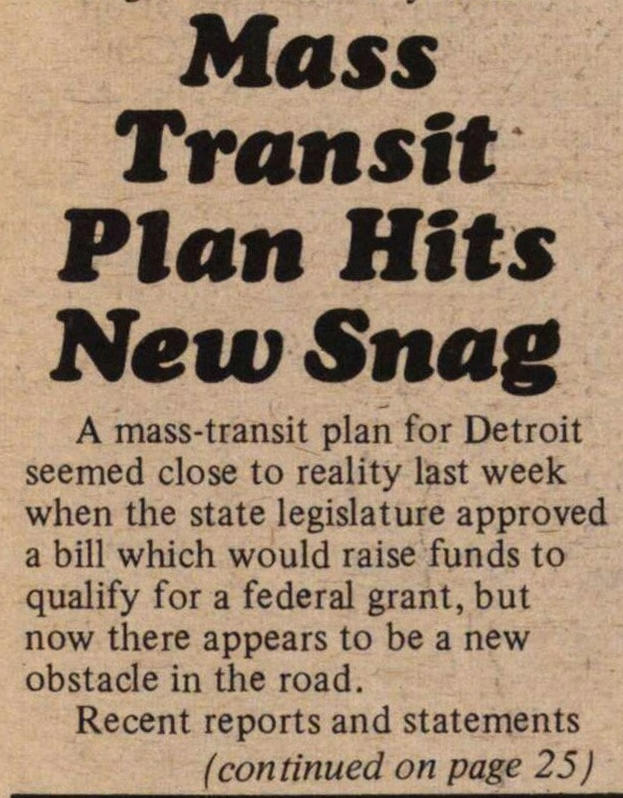 A mass-transit plan for Detroit seemed close to reality last week when the state legislature approved a bilí which would raise funds to qualify for a federal grant, but now there appears to be a new obstacle in the road. Recent reports and statements (continued on page 25) Mass Transit Plan Hits New Snag ( 'continued from page 5) by federal transportation officials indícate that the Urban Mass Transportation Administration (UMTA) may not have the funds necessary to finance Detroit's mass-transit plans, which would insure a rapid-rail and bus system. Application for federal funds for the Detroit plan is expected to be filed before the end of the year. If the federal government approves the application for matching funds they would pay $900 miUion of the $1.125 billion package. The remaining cost of the plan would be picked up by state and local officials. The question now,however, is does the federal agency have the money? The question carne up last week at a meeting between Michigan representatives and UMTA chief Robert Patricelli. Patricelli has been saying all year that there is less than $2 billion left from the original $1 1 .8 billion alloted by the National Mass Transportation Assistance Act of 1974. After repeated requests, Patricelli revealed last week that there is only between $500 million and $1 billion left in uncommitted funds-about $400 million short, or just enough to finance Detroit's plan, depending on which figure is used. Former UMTA chief Frank Herringer, who resigned in 1975, has said that he wouldn't be surprised if there was less than $500 million left in mass transit appropriations.