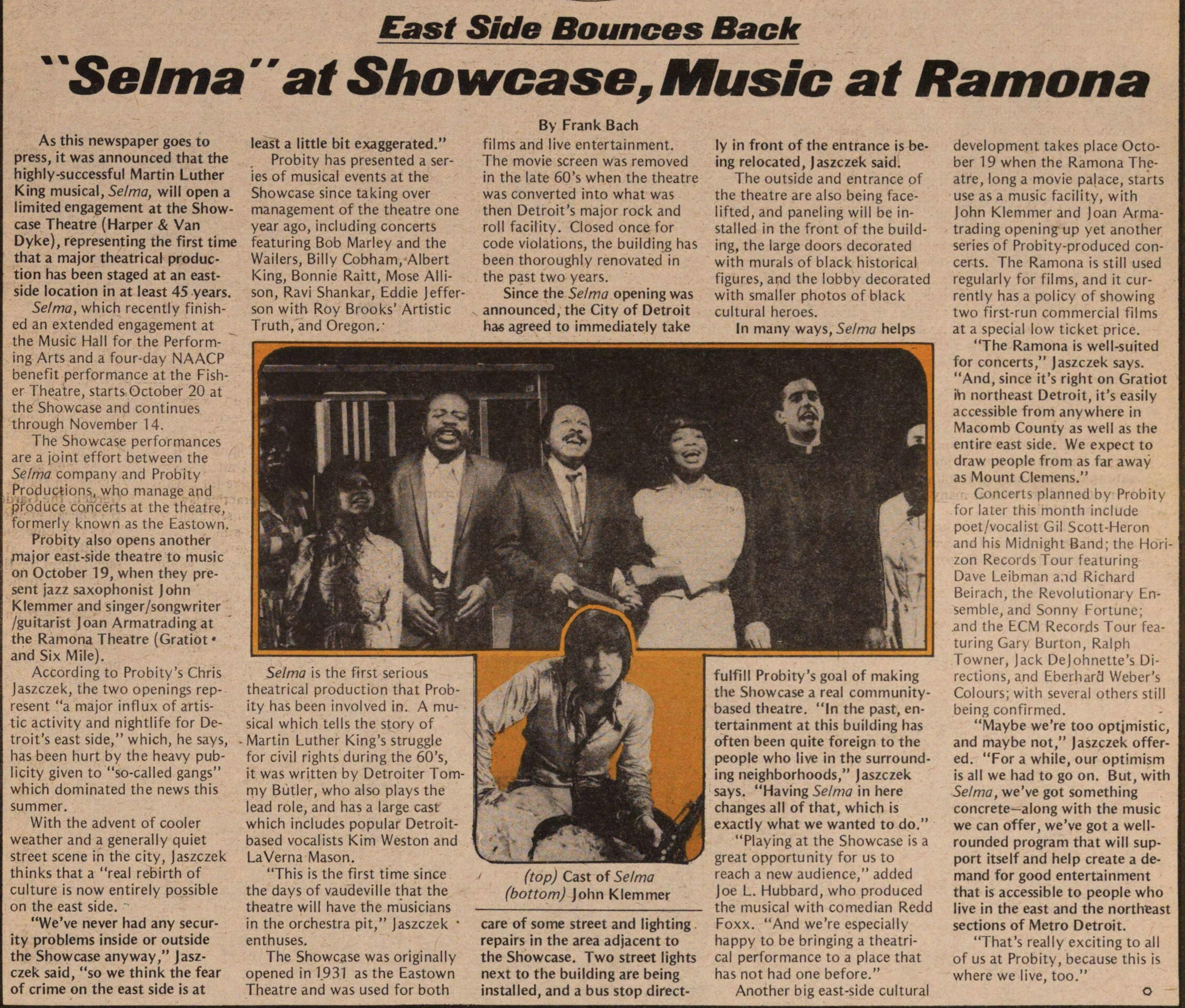 As this newspaper goes to press, t was announced that the highly-successful Martin Luther King musical, Selma, will open a limited engagement at the Showcase Theatre (Harper & Van Dyke), representing the first time that a major theatrical production has been staged at an eastside location in at least 45 years. Selma, which recently finished an extended engagement at the Music Hall for the Performng Arts and a four-day NAACP benefit performance at the Fisher Theatre, starts October 20 at the Showcase and continúes through November 14. The Showcase performances are a joint effort between the Selma company and Probity Produclions, who manage and produce concerts at the theatre, formerly known as the Eastown. Probity also opens another major east-side theatre to music on October 19, when they present jazz saxophonist John Klemmer and singersongwriter guitarist Joan Armatrading at the Ramona Theatre (Gratiot and Six Mile). According to Probity's Chris Jaszczek, the two openings represent "a major influx of artistic activity and nightlife for Detroit's east side," which, he says, . has been hurt by the heavy publicity given to "so-called gangs" which dominated the news this summer. With the advent of cooler weather and a generally quiet street scène in the city, jaszczek thinks that a "real rebirth of culture is now entirely possible on the east side. "We've never had any security problems inside or outside the Showcase anyway," Jaszczek said, "so we think the fear of crime on the east side is at least a little bit exaggerated." Probity has presented a series of musical events at the Showcase since taking over management of the theatre one year ago, including concerts featuring Bob Marley and the Wailers, Billy Cobham, Albert King, Bonnie Raitt, Mose Allison, Ravi Shankar, Eddie Jefferson with Roy Brooks' Artistic Truth, and Oregon.' Selma s the first serious theatrical production that Probty has been involved n. A musical which tells the story of Martin Luther King's struggle for civil rights during the 60's, it was written by Detroiter Tommy Butler, who also plays the lead role, and has a large cast which includes popular Detroitbased vocal ists Kim Weston and LaVerna Mason. "This is the first time since the days of vaudeville that the theatre will have the musicians in the orchestra pit," Jaszczek ■ enthuses. The Showcase was originally opened in 1.931 as the Eastown Theatre and was used for both films and live entertainment. The movie screen was removed in the late 60's when the theatre was converted into what was then Detroit's major rock and roll facility. Closed once for code violations, the building has been thoroughly renovated in the past two years. Since the Sema opening was announced, the City of Detroit has agreed to mmediately take care of some street and lighting repairs in the area adjacent to the Showcase. Two street Mghts next to the building are being installed, and a bus stop ly in front of the entrance is being relocated, Jaszczek said. The outside and entrance of the theatre are also being facelifted, and paneling will be installed n the front of the building, the large doors decorated with muráis of black historical figures, and the lobby decorated with smaller photos of black cultural héroes. In many ways, Selma helps fulfill Probity's goal of making the Showcase a real communitybased theatre. "In the past, entertainment at this building has often been quite foreign to the people who live in the surrounding neighborhoods," Jaszczek says. "Having Sema in here changes all of that, which is exactly what we wanted to do." "Playing at the Showcase s a great opportunity for us to reach a new audience," added Joe L. Hubbard, who produced the musical with comedian Redd Foxx. "And we're especially happy to be bringing a theatrical performance to a place that has not had one before." Another big east-side cultural development takes place October 19 when the Ramona Theatre, long a movie palace, starts use as a music facility, with John Klemmer and Joan Armatrading opening up yet another series of Probity-produced concerts. The Ramona is still used regularly for films, and t currently has a policy of showing two first-run commercial films at a special low ticket price. "The Ramona is well-suited for concerts," Jaszczek says. "And, since t's right on Gratiot fti northeast Detroit, it's easily accessible from anywhere in Macomb County as well as the entire east side. We expect to draw people from as far away as Mount Clemens." Concerts planned by Probity for later this month include poetvocalist Gil Scott-Heron and nis Midnight Band; the Horizon Records Tour featuring Dave Leibman and Richard Beirach, the Revolutionary Ensemble, and Sonny Fortune; .and the ECM Records Tour featuring Gary Burton, Ralph Towner, Jack Dejohnette's Directions, and Ebetharfl Weber's Colours; with several others still being confirmed. "Maybe we're too optjmistic, and maybe not," Jaszczek offered. "For a while, our optimism is all we had to go on. But, with Selma, we've got something concrete- along with the music we can offer, we've got a wellrounded program that will support itself and help créate a demand for good entertainment that is accessible to people who live in the east and the northeast sections of Metro Detroit. "That's really exciting to all of us at Probity, because this is where we live, too." o