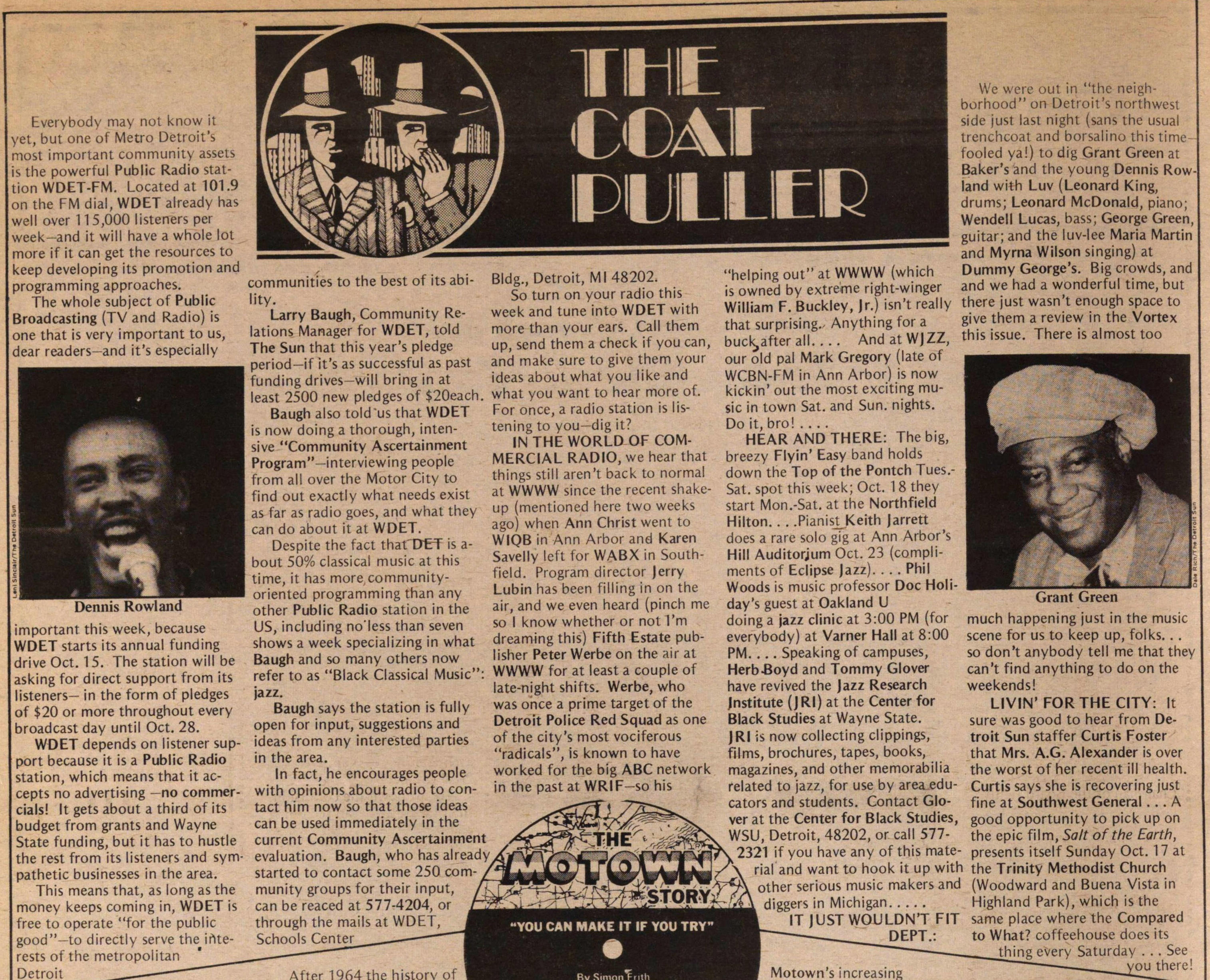 Everybody may not know t yet, but one of Metro Detrok's most important community assets is the powerful Public Radio stattion WDET-FM. Located at 101.9 on the FM dial, WDET already has well over 1 1 5,000 listeners per week-and it will have a whole lot more f it can get the resources to keep developing its promotion and programming approaches. The whole subject of Public Broadcasting (TV and Radio) is one that is very important to us, dear readers- and it's especially important this week, because WDET starts ts annual funding drive Oct. 15. The station will be asking for direct support from its listeners- in the form of pledges of $20 or more throughout every broadcast day until Oct. 28. WDET depends on listener support because it is a Public Radio station, which means that it accepts no advertising - no commercials! It gets about a third of ts budget from grants and Wayne State funding, but t has to hustle the rest from ts listeners and sympathetic businesses in the area. This means that, as long as the money keeps coming in, WDET is free to opérate "for the public good"- to directly serve the interests of the metropolitan Detroit - ' communities to the best of ts ability. Larry Baugh, Community Relations Manager for WDET, told The Sun that this year's pledge period- if t's as successful as past funding drives-will bring n at least 2500 new pledges of $20each. Baugh also toldus that WDET s now doing a thorough, intensive "Community Ascertainment Program"- interviewing people from all over the Motor City to find out exactly what needs exist as far as radio goes, and what they can do about t at WDET. Despite the fact thatTJET is about 50% classical music at this time, it has more communityoriented programming than any other Public Radio station in the US, including noless than seven shows a week specializing in what Baugh and so many others now refer to as "Black Classical Music": jazz. Baugh says the station is fully open for input, suggestions and ideas from any interested parties in the area. In fact, he encourages people with opinions about radio to contact him now so that those ideas can be used mmediately in the current Community Ascertainment evaluation. Baugh, who has already started to contact some iU community groupsfor their input, j can be reaced at 577-4204, or h through the mails at WDET, È Schools Center ■ ■ Bldg., Detroit, MI 48202. So turn on your radio this week and tune into WDET with more than your ears. Cali them up, send them a check if you can, and make sure to give them your ideas about what you like and what you want to hear more of. For once, a radio station is listening to you-dig it? IN THE WORLD OF COMMERCIAL RADIO, we hear that things still aren't back to normal at WWWW since the recent shakeup (mentioned here two weeks ago) when Ann Christ went to W1QB in Ann Arbor and Karen Savelly left for WABX n Southfield. Program director Jerry Lubin has been filling n on the air, and we even heard (pinch me so I know whether or nol l'm dreaming this) Fifth Estáte publisher Peter Werbe on the air at WWWW for at least a couple of late-night shifts. Werbe, who was once a prime target of the Detroit Pólice Red Squad as one of the city's most vociferous "radicáis", is known to have worked for the big ABC network in the past at WRIF-so his "helping out" at WWWW (which is owned by extreme right-winger William F. Buckley, Jr.) isn't really that Anything for a buck,after all AndatWJZZ, our old pal Mark Gregory (late of WCBN-FM in Ann Arbor) is now kickin' out the most exciting music in town Sat. and Sun. nights. Do it, bro! HEAR ANDTHERE: The big, breezy Flyin' Easy band holds down the Top of the Pontch Tues.Sat. spot this week; Oct. 1 8 they start Mon.-Sat. at the Northfield Hilton PianistKeith Jarrett does a rare solo gig at Ann Arbor's Hill Auditorjum Oct. 23 (compliments of Eclipse Jazz). . . . Phil Woods is music professor Doe Holiday's guest at Oakland U doing a jazz clinic at 3:00 PM (for everybody) at Varner Hall at 8:00 PM. . . . Speaking of campuses, Herb-Boyd and Tommy Glover have revi ved the Jazz Research Jnstitute (JRI) at the Center for Black Studies at Wayne State. JRI is now collecting clippings, films, brochures, tapes, books, magazines, and other memorabilia related to jazz, for use by area educators and students. Contact Glover at the Center for Black Studies, WSU. Detroit. 48202. or cali 2321 f you have any of this matel rialand want to hook t up with h, other serious music makers and A diggers in Michigan m ITJUSTWOULDN'T FIT M -______DEPT.: Wc were out in "the neighborhood" on Detroit's northwest side ust last night (sans the usual trenchcoat and borsalino this timefooled ya!) to dig Grant Green at Baker's and the young Dennis Rowland with Luv (Leonard King, drums; Leonard McDonald, piano; Wendell Lucas, bass; George Green, guitar; and the luv-lee Maria Martin and Myrna Wilson singing) at Dummy George's. Big crowds, and and we had a wonderful time, but there just wasn't enough space to give them a review in the Vortex this issue. There is almost too much happening just n the music scène for us to keep up, folks. . . so don't anybody teil me that they can 't find anything to do on the weekends! LIVIN' FOR THE CITY: It sure was good to hear from Detroit Sun staffer Curtis Foster that Mrs. A.G. Alexander is over the worst of her recent II health. Curtis says she is recovering just fine at Southwest General ... A good opportunity to piek up on the epic film, Solt of the Earth, presents tself Sunday Oct. 1 7 at the Trinity Methodist Church (Woodward and Buena Vista in Highland Park), which is the same place where the Compared to What? coffeehouse does its _ thina every Saturday . . . See ■ - - you there!