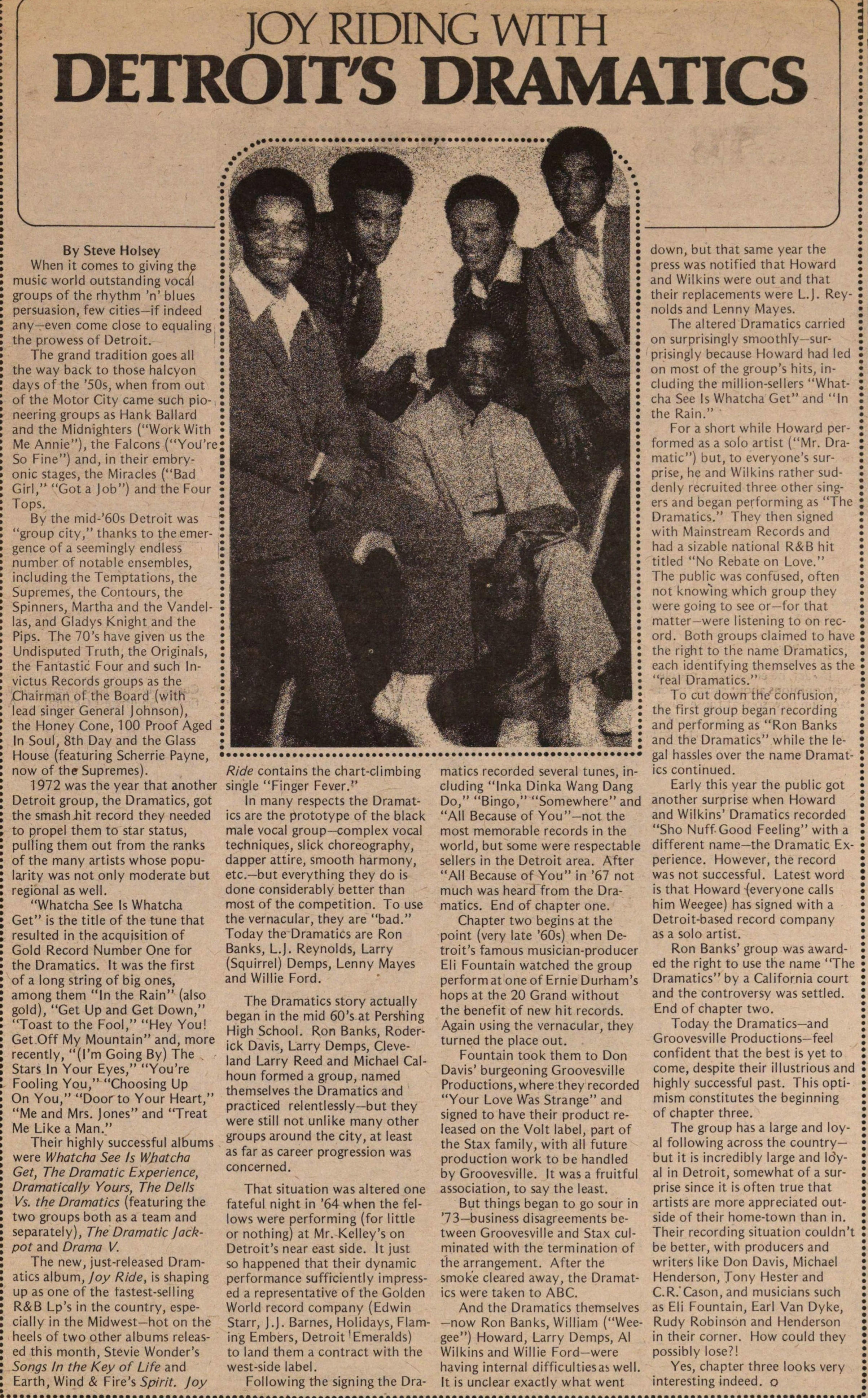 When it comes to giving the music world outstanding vocal groups of the rhythm 'n' blues persuasion, few cities- if indeed any- even come close to equaling the prowess of Detroit.

The grand tradition goes all the way back to those halcyon days of the '50s, when from out of the Motor City came such pioneering groups as Hank Ballard and the Midnighters ("Work With Me Annie"), the Falcons ("You're So Fine") and, in their embryonic stages, the Miracles ("Bad Girl," "Gota Job") and the Four Tops.

By the mid-'60s Detroit was "group city," thanks to the emergence of a seemingly endless number of notable ensembles, including the Temptations, the Supremes, the Contours, the Spinners, Martha and the Vandellas, and Gladys Knight and the Pips. The 70's have given us the Undisputed Truth, the Originals, the Fantastic Four and such Invictus Records groups as the ; Chairman of the Board (with lead singer General Johnson), the Honey Cone, 100 Proof Aged In Soul, 8th Day and the Glass House (featuring Scherrie Payne, now of the Supremes).

1972 was the year that another Detroit group, the Dramatics, got the smash hit record they needed to propel them to star status, pulling them out from the ranks of the many artists whose popularity was not only moderate but regional as well.

"Whatcha See Is Whatcha Get" is the title of the tune that resulted in the acquisition of Gold Record Number One for the Dramatics. It was the first of a long string of big ones, among them "In the Rain" (also gold), "Get Up and Get Down," "Toast to the Fool," "Hey You! Get Off My Mountain" and, more recently, "(l'm Going By) The Stars In Your Eyes," "You're Fooling You," "Choosing Up On You," "Door to Your Heart," "Me and Mrs. Jones" and "Treat Me Like a Man."

Their highly successful albums were Whatcha See Is Whatcha Get, The Dramatic Experience, Dramatically Yours, The Dells Vs. the Dramatics (featuring the two groups both as a team and separately), The Dramatic Jack-pot and Drama V.

The new, just-released Dramatics album, Joy Ride, is shaping up as one of the fastest-selling ; R&B Lp's in the country, especially in the Midwest- hot on the heels of two other albums released this month, Stevie Wonder's Songs In the Key of Life and Earth, Wind & Fire's Spirit Joy Ride contains the chart-climbing single "Finger Fever."

In many respects the Dramatics are the prototype of the black male vocal group- complex vocal techniques, slick choreography, dapper attire, smooth harmony, etc- but everything they do is done considerably better than most of the competition. To use the vernacular, they are "bad." Today the Dramatics are Ron Banks, L.j. Reynolds, Larry (Squirrel) Demps, Lenny Mayes and Willie Ford.

The Dramatics story actually began in the mid 60's at Pershing High School. Ron Banks, Roderck Davis, Larry Demps, Cleveland Larry Reed and Michael Calhoun formed a group, named themselves the Dramatics and practiced relentlessly-but they were still not unlike many other groups around the city, at least as far as career progression was concerned.

That situation was altered one fateful night in '64 when the fellows were performing (for little or nothing) at Mr. Kelley's on Detroit's near east side. It just so happened that their dynamic performance sufficiently impressed a representative of the Golden World record company (Edwin Starr, J.J. Barnes, Holidays, Flaming Embers, Detroit Emeralds) to land them a contract with the west-side label.

Chapter two begins at the point (very late '60s) when Detroit's famous musician-producer Eli Fountain watched the group perform at one of Ernie Durham's hops at the 20 Grand without the benefit of new hit records. Again using the vernacular, they turned the place out.

Fountain took them to Don Davis' burgeoning Groovesville Productions, where they recorded "Your Love Was Strange" and signed to have their product released on the Volt label, part of the Stax family, with all future production work to be handled by Groovesville. It was a fruitful association, to say the least.

But things began to go sour in '73-business disagreements between Groovesville and Stax culminated with the termination of the arrangement. After the smoke cleared away, the Dramatics were taken to ABC.

And the Dramatics themselves - now Ron Banks, William ("Weegee") Howard, Larry Demps, Al Wilkins and Willie Ford- were having internal difficulties as well. It's unclear exactly what went down, but that same year the press was notified that Howard and Wilkins were out and that their replacements were L.J. Reynolds and Lenny Mayes.

The altered Dramatics carried on surprisingly smoothly- surprisingly because Howard had led on most of the group's hits, including the million-sellers "Watcha See Is Whatcha Get" and "In the Rain."

For a short while Howard performed as a solo artist ("Mr. Dramatic") but, to everyone's surprise, he and Wilkins rather suddenly recruited three other singers and began performing as "The ; Dramatics." They then signed with Mainstream Records and had a sizable national R&B hit titled "No Rebate on Love." ; The public was confused, often not knowïng which group they were going to see or- for that matter- were listening to on record. Both groups claimed to have the right to the name Dramatics, each identifying themselves as the "real Dramatics."

To cut down the confusion, the first group began recording and performing as "Ron Banks and the Dramatics" while the legal hassles over the name Dramatics continued.

Early this year the public got another surprise when Howard and Wilkins' Dramatics recorded '. "Sho Nuff Good Feeling" with a different name- the Dramatic Experience. However, the record ; was not successful. Latest word is that Howard (everyone calls him Weegee) has signed with a Detroit-based record company as a solo artist.

Ron Banks' group was awarded the right to use the name "The Dramatics" by a California court and the controversy was settled. End of chapter two.

Today the Dramatics- and Groovesville Productions- feel confident that the best is yet to come, despite their illustrious and highly successful past. This optimism constitutes the beginning of chapter three.

The group has a large and loyal following across the country- but it is incredibly large and loyal in Detroit, somewhat of a surprise since it is often true that artists are more appreciated outside of their home-town than in. Their recording situation couldn't be better, with producers and writers like Don Davis, Michael Henderson, Tony Hester and J C.R. Cason, and musicians such as Eli Fountain, Earl Van Dyke, Rudy Robinson and Henderson in their corner. How could they possibly lose?!