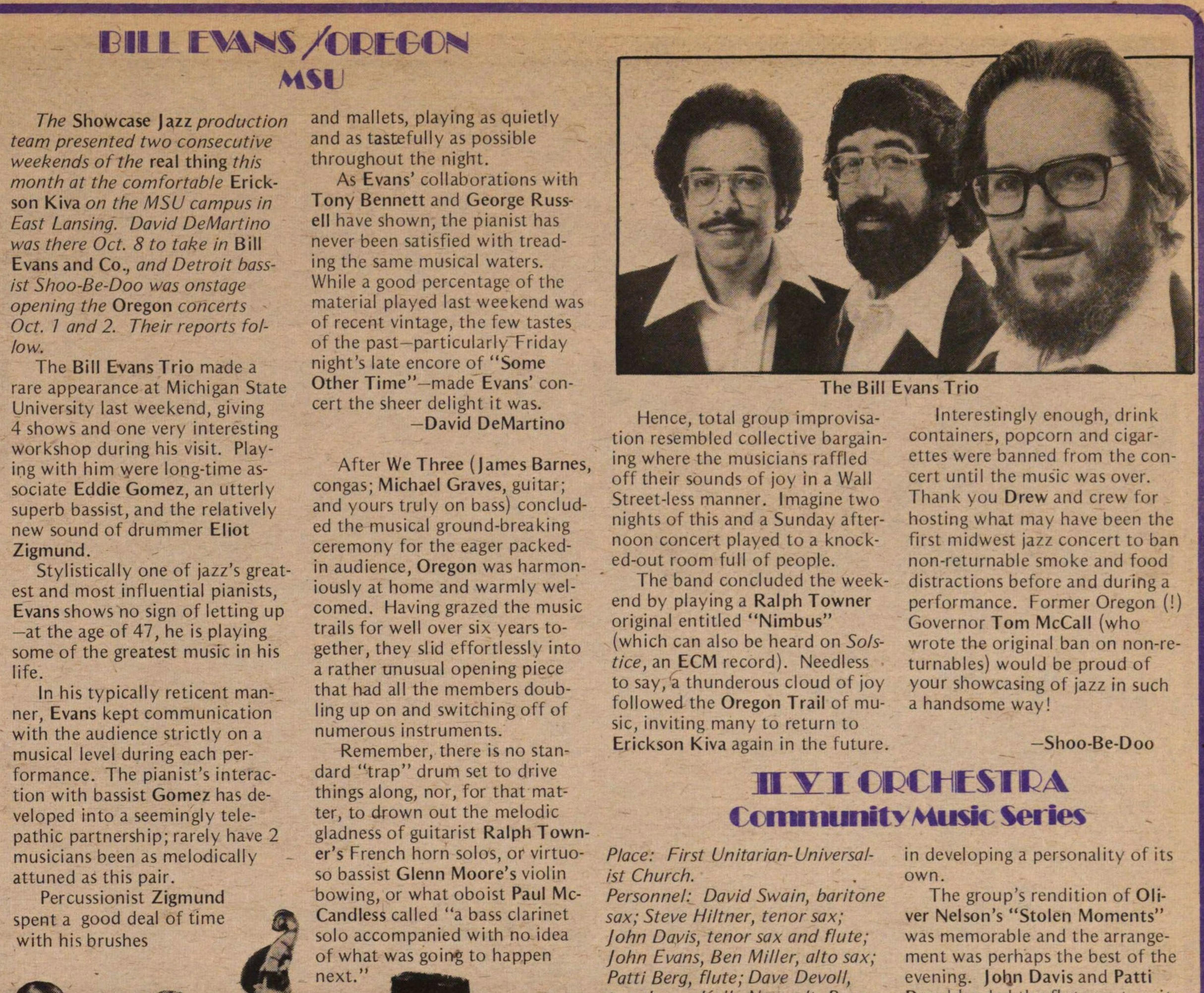 The Showcase Jazz production team presented two consecutive weekends of the real thing this month at the comfortable Erickson Kiva on the MSU campus in East Lansing. David DeMartino was there Oct. 8 to take in Bill Evans and Co., and Detroit bassist Shoo-Be-Doo was onstage opening the Oregon concerts Oct. 1 and 2. Their reports follow.

The Bill Evans Trio made a rare appearance at Michigan State University last weekend, giving 4 shows and one very interesting workshop during his visit. Playing with him were long-time associate Eddie Gomez, an utterly superb bassist, and the relatively new sound of drummer Eliot Zigmund.

Stylistically one of jazz's greatest and most influential pianists, Evans shows no sign of letting up-at the age of 47, he is playing some of the greatest music in his life.

In his typically reticent manner, Evans kept communication with the audience strictly on a musical level during each performance. The pianist's interaction with bassist Gomez has developed into a seemingly telepathic partnership; rarely have 2 musicians been as melodically attuned as this pair.

Percussionist Zigmund spent a good deal of time #V with his brushes and mallets, playing as quietly and as tastefully as possible throughout the night.

As Evans' collaborations with Tony Bennett and George Russell have shown, the pianist has never been satisfied with treading the same musical waters. While a good percentage of the material played last weekend was of recent vintage, the few tastes of the past- particularlyFriday night 's late encore of "Some Other Time"- made Evans' concert the sheer delight it was. -David DeMartino

After We Three (James Barnes, congas; Michael Graves, guitair; and yours truly on bass) concluded the musical ground-breaking ceremony for the eager packed in audience, Oregon was harmoniously at home and warmly welcomed. Having grazed the music trails for well over six years together, they slid effortlessly into a rather unusual opening piece that had all the members doubling up on and switching off of numerous instruments.

Remember, there is no standard "trap" drum set to drive things along, nor, for that matter, to drown out the melodic gladness of guitarist Ralph Towner's French horn solos, or virtuoso bassist Glenn Moore's violin bowing, or what oboist Paul McCandless called "a bass clarinet solo accompanied with no idea of what was going to happen next."

Hence, total group improvisation resembled collective bargaining where the musicians raffled off their sounds of joy in a Wall Street-less manner. Imagine two nights of this and a Sunday afternoon concert played to a knocked-out room full of people.

The band concluded the weekend by playing a Ralph Towner original entitled "Nimbus" (which can also be heard on Solstice, an ECM record). Needless to say, a thunderous cloud of joy followed the Oregon Trail of music, inviting many to return to Erickson Kiva again n the future.

Interestingly enough, drink containers, popcorn and cigarettes were banned from the concert until the music was over. Thank you Drew and crew for hosting what may have been the first midwest jazz concert to ban non-returnable smoke and food distractions before and during a performance. Former Oregon (!) Governor Torn McCall (who wrote the original ban on non-returnables) would be proud of your showcasing of jazz in such a handsome way!