Edwards: A Stronghold In The 9th District 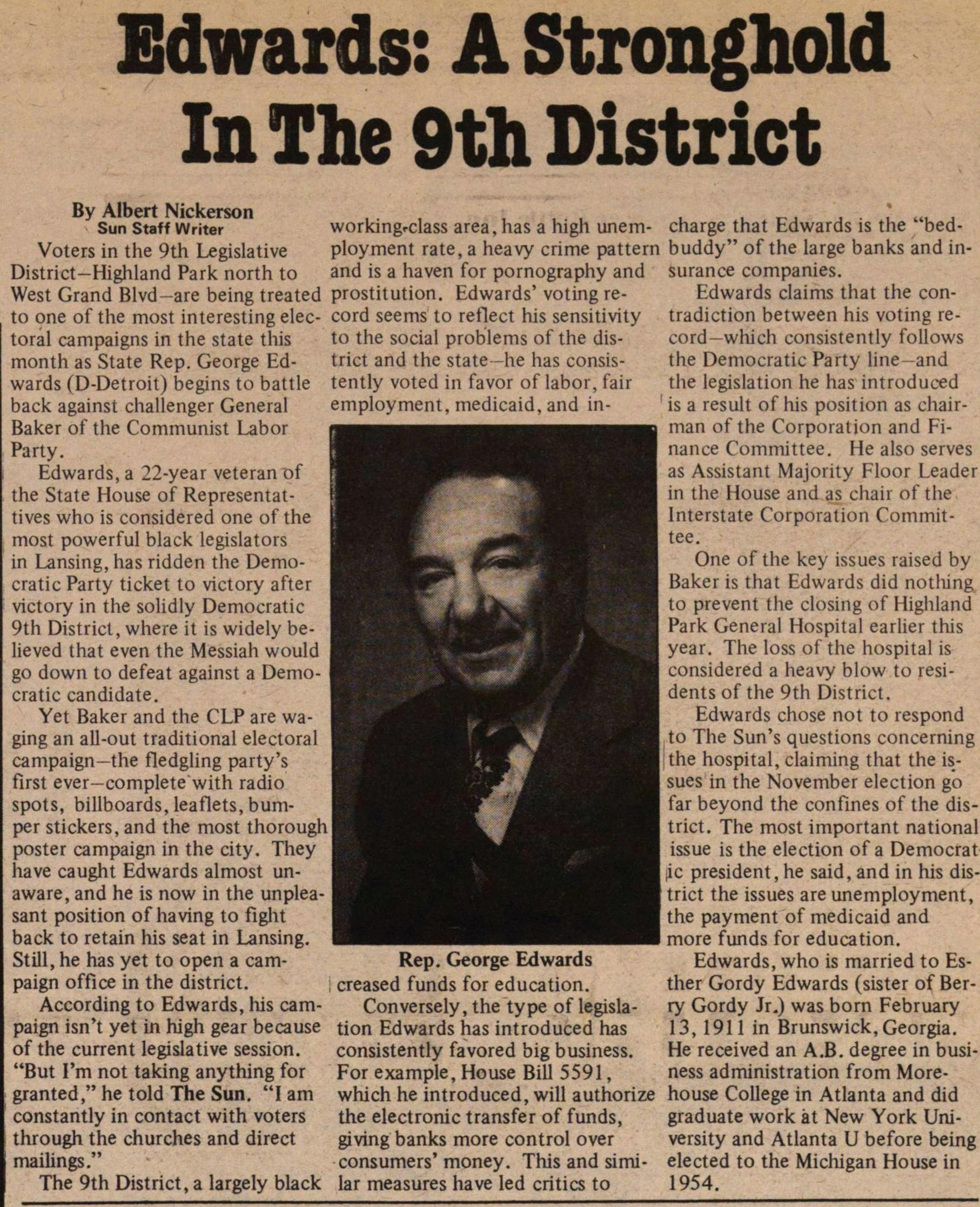 Voters in the 9th Legislative District- Highland Park north to West Grand Blvd-are being treated to one of the most interesting electoral campaigns in the state this month as State Rep. George Edwards (D-Detroit) begins to battle back against challenger General Baker of the Communist Labor Party.

Edwards, a 22-year veteran of the State House of Representatives who is considered one of the most powerful black legislators in Lansing, has ridden the Democratic Party ticket to victory after victory in the solidly Democratic 9th District, where it is widely believed that even the Messiah would go down to defeat against a Democratic candidate.

Yet Baker and the CLP are waging an all-out traditional electoral campaign- the fledgling party's first ever- complete with radio spots, billboards, leaflets, bumper stickers, and the most thorough poster campaign in the city. They have caught Edwards almost unaware, and he is now in the unpleasant position of having to fight back to retain his seat in Lansing. Still, he has yet to open a campaign office in the district.

According to Edwards, his campaign isn't yet in high gear because of the current legislative session. "But I'm not taking anything for granted," he told The Sun. "l am constantly in contact with voters through the churches and direct mailings."

The 9th District, a largely black working class area, has a high unemployment rate, a heavy crime pattern and is a haven for pornography and prostitution. Edwards' voting record seems to reflect his sensitivity to the social problems of the district and the state- he has consistently voted in favor of labor, fair employment, medicaid, and increased funds tor education.

Conversely, the type of legislation Edwards has introduced has consistently favored big business. For example, House Bill 5591, which he introduced, will authorize the electronic transfer of funds, giving banks more control over consumers' money. This and similar measures have led critics to charge that Edwards is the "bed-buddy" of the large banks and insurance companies.

Edwards claims that the contradiction between his voting record- which consistently follows the Democratic Party line- and the legislation he has introduced is a result of his position as chairman of the Corporation and Finance Committee. He also serves as Assistant Majority Floor Leader in the House and as chair of the Interstate Corporation Committee.

One of the key issues raised by Baker is that Edwards did nothing to prevent the closing of Highland Park General Hospital earlier this year. The loss of the hospital is considered a heavy blow to residents of the 9th District.

Edwards chose not to respond to The Sun's questions concerning the hospital, claiming that the issues in the November election go far beyond the confines of the district. The most important national issue is the election of a Democratic president, he said, and in his district the issues are unemployment, the payment of medicaid and more funds for education.

Edwards, who is married to Esther Gordy Edwards (sister of Berry Gordy Jr.) was born February 13, 1911 in Brunswick, Georgia. He received an A.B. degree in business administration from Morehouse College in Atlanta and did graduate work at New York University and Atlanta U before being elected to the Michigan House in 1954.