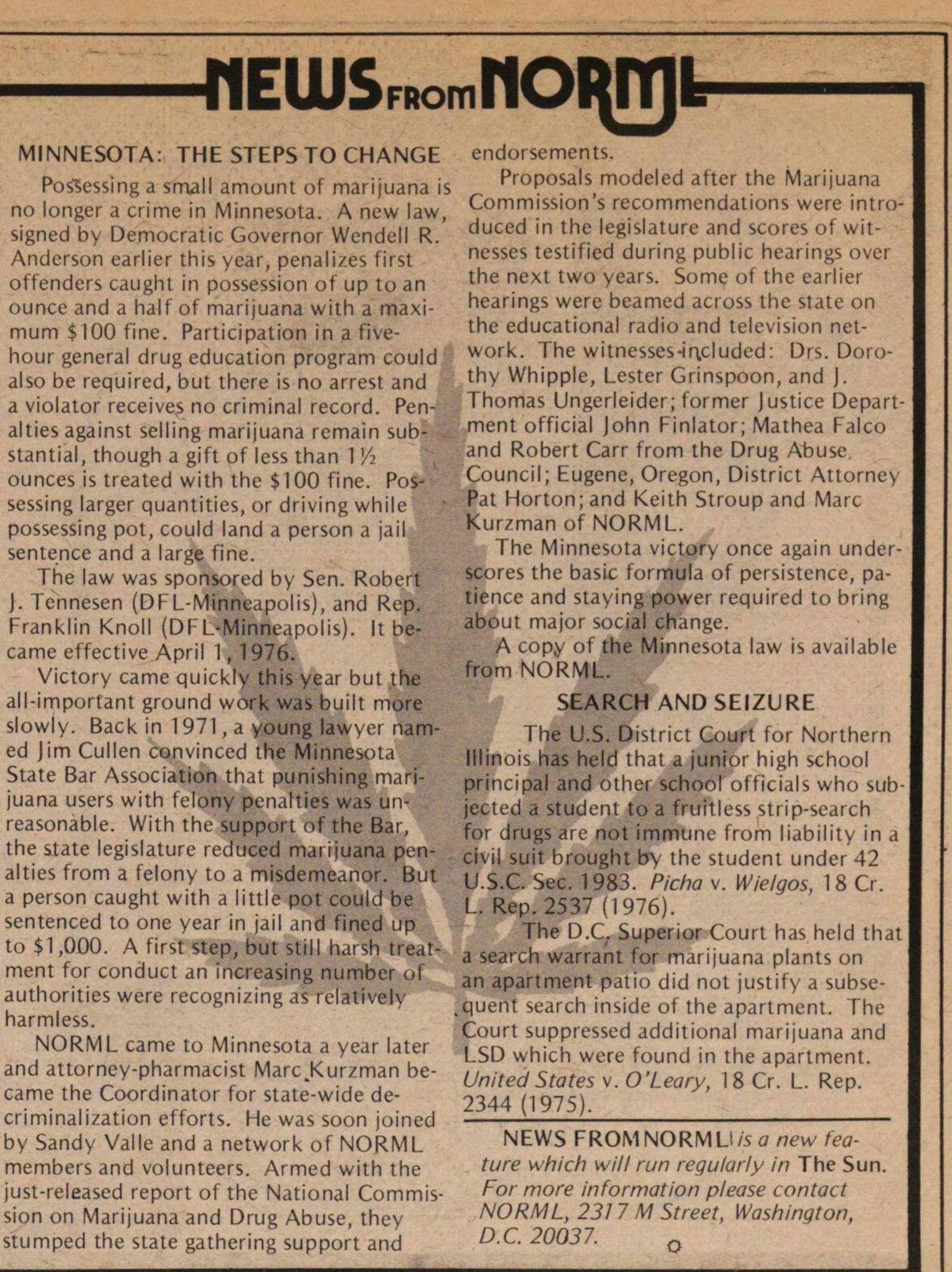 PosSessinga small amount of marijuana is no longer a crime in Minnesota. A new law, signed by Democratie Governor Wendell R. Anderson earlier this year, penalizes first offenders caught n possession of up to an ounce and a half of marijuana with a maximum $100 fine. Participaron in a fivehour general drug education program could also be required, but there is no arrest and a violator receives no criminal record. Penalties against selling marijuana remain t stantial, though a gift of less than 1 'A ounces is treated with the $100 fine. Pos-, sessing larger quantities, or driving while possessing pot, could land a person a jail. sentence and a large fine. The law was sponsored by Sen. Robert ). Tennesen (DFL-Minneapolis), and Rep. Franklin Knoll (Dl L-Minneapolis). It became effective April 1 , 1976. Victory carne quickly this year but the all-important ground work was built more slowly. Back in 1 971 , a young lawyei named )im Cullen convinced the Minnesota - State Bar Association that punishing marijuana users with felony penalties was unreasonable. With the support of the Bar, the state legislature reduced marijuana penalties from a felony to a misdemeanor. But a person caught with a little pot could be sentenced to one year in jail and fined up to $1,000. A first step, but still harsh trearment for conduct an increasing number of authorities were recognizing as rclatively harmless. NORML came to Minnesota a year later and attorney-pharmacist Marc.Kurzman became the Coördinator for state-wide decriminalization efforts. He was soon joined by Sandy Valle and a network of NORML members and volunteers. Armed with the just-released report of the National Commission on Marijuana and Drug Abuse, they stumped the state gathering support and endorse ments. Proposals modeled after the Marijuana Commission's recommendations were ntmduced n the legislature and scores of witnesses testified during public hearings over the next two years. Some of the earlier hearings were beamed across the state on the educational radio and televisión network. The witnesses-ircluded: Drs. Dorothy Whipple, Lester Grinspoon, and ). Thomas Ungerleider; former Justice Department official John Finlator; Mathea Falco and Robert Carr from the Drug Abuse. Council; Eugene, Oregon, District Attornev Pat Horton; and Keith Stroupand Mare Kurzman of NORML. The Minnesota victpry once again underscores the basic formula of persistence, patience and staying power required to bring about major social change. ■ A copy of the Minnesota law is available from NORML. SEARCH ANDSEIZURE The U.S. District Court for Northern Illinois has held that a junior high school principal and othei school officials who subjected a student to a fruitless strip-search for drugs are not immune from liability in a civil suit brought by the student under 42 U.S.C. Sec. 1983. Picha v. Wielgos, 18 Cr. L. Rep. 2537(1976). The Ü.C Superior Court has held that a search warrant for marijuana plants on an apartment patio did not justify a subse.quent search inside of the apartment. The Court suppressed additional marijuana and LSD which were found in the apartment. United States v. O'Leary, 18 Cr. L. Rep. 2344 (1975). NEWS FROM NORM LI a new feature which will run regularly in The Sun. For more information please contact NORML, 231 7 M Street, Washington, D.C. 20037. Q