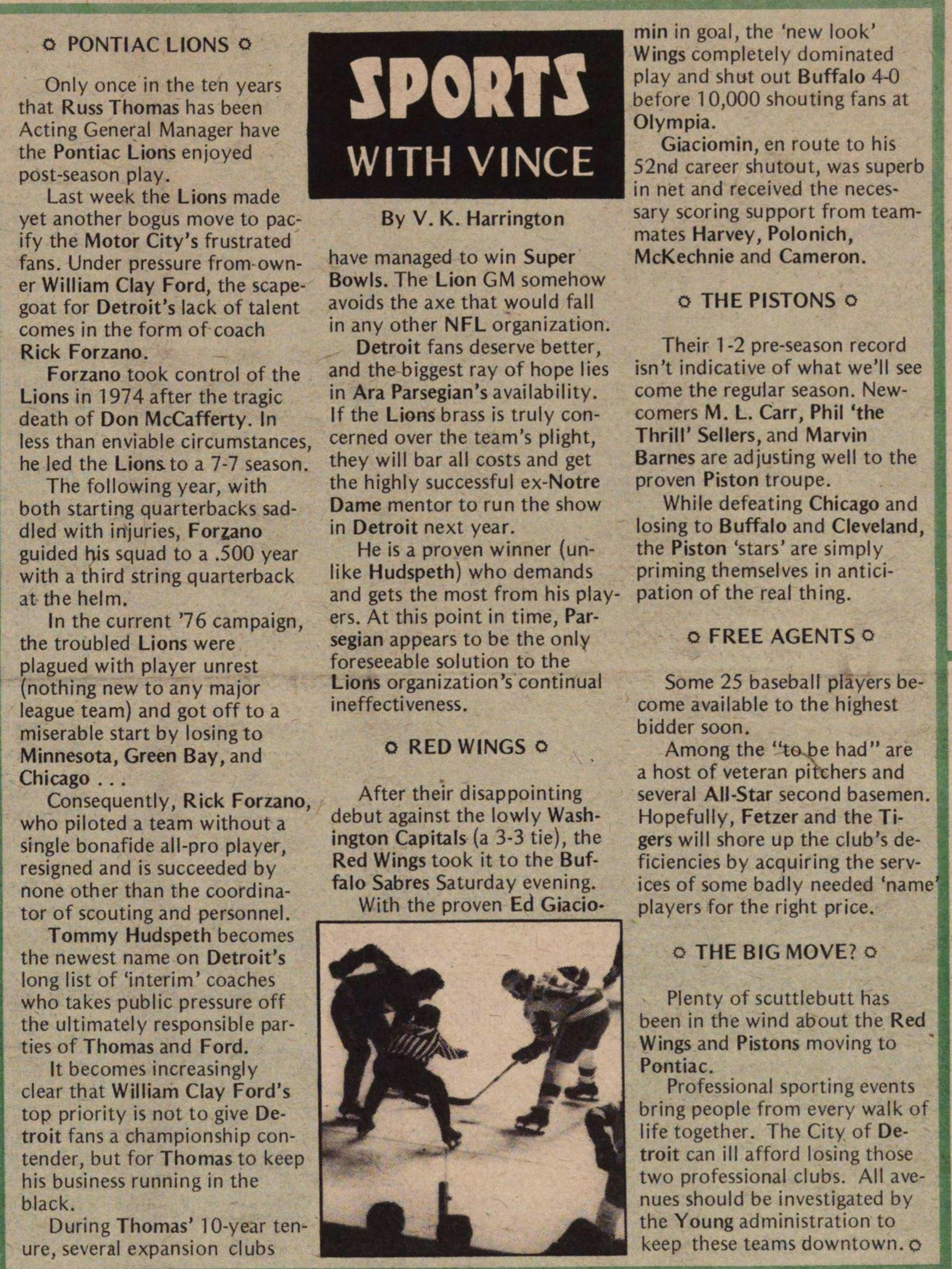 O PONTIAC LIONS O Only once in the ten years that Russ Thomas has been Acting General Manager have I the Pontiac Lions enjoyed post-season play. Last week the Lions made ' yet another bogus move to pacfy the Motor City's frustrated fans. Under pressure fromowner William Clay Ford, the scapegoat for Detroit's lack of talent comes n the form of coach Riek Forzano. Forzano took control of the Lions n 1974 after the tragic death of Don McCafferty. In less than enviable circumstances, he led the Lions to a 7-7 season. The following year, with both starting quarterbacks saddled with injuries, Forz.ano guided his squad to a .500 year with a third string quarterback at the helm. In the current '76 campaign, the troubled Lions were plagued with player unrest (nothing new to any major league team) and got off to a miserable start by losing to Minnesota, Green Bay, and Chicago . . . Consequently, Riek Forzano, who piloted a team without a single bonafide all-pro player, resigned and is succeeded by none other than the coördinator of scouting and personnel. Tommy Hudspeth becomes the newest name on Detroit's long list of 'interim' coaches who takes public pressure off the ultimately responsible parties of Thomas and Ford. It becomes increasingly clear that William Clay Ford's top priority is not to give Detroit fans a championship contender, but for Thomas to keep his business running in the black. During Thomas' 10-year tenure, several expansión clubs have managed to win Super Bowls. The Lion GM somehow avoids the axe that would fall n any other NFL organizaron. Detroit fans deserve better, and the biggest ray of hope lies in Ara Parsegian'savailability. If the Lions brass is truly concerned over the team's plight, they will bar all costs and get the highly successful ex-Notre Dame mentor to run the show in Detroit next year. He is a proven winner (unlike Hudspeth) who demands and gets the most from his players. At this point in time, Parsegian appears to be the only foreseeable solution to the Lions organization's continual ineffectiveness. O REDWINGS O After their disappointing debut against the lowly Washington Capitals (a 3-3 tie), the Red Wings took t to the Buffalo Sabres Saturday evening. With the proven Ed min n goal, the 'new look' Wings completely dominated play and shut out Buffalo 4-0 before 1 0,000 shouting fans at Olympia. Giaciomin, en route to nis 52nd career shutout, was superb n net and received the necessary scoring support from teammates Harvey, Polonich, McKechnie and Cameron. O THE PISTONS O Their 1 -2 pre-season record isn't indicative of what we'll see i come the regular season. Newcomers M. L. Carr, Phil 'the Thrill' Sellers, and Marvin Barnes are adjusting well to the proven Piston troupe. While defeating Chicago and losing to Buffalo and Cleveland, the Piston 'stars' are simply priming themselves in anticipation of the real thing. O FREE AGENTS O Some 25 baseball pláyers become available to the highest bidder soon. Among the "tojpe had" are a host of veteran pitchers and several All-Star second basemen. i Hopefully, Fetzer and the Tigers will shore up the club's deficiencies by acquiring the services of some badly needed 'name players for the right price. o THE BIG MOVE? o Plenty of scuttlebutt has been in the wind about the Red Wings and Pistons moving to Pontiac. Professional sporting events bring people from every walk of life together. The City of Detroit can ill af ford losing those two professional clubs. All avenues should be nvestigated by the Young administraron to keep these teams downtown. o