Homeless Program Gets $3,000 in Second Payment from City 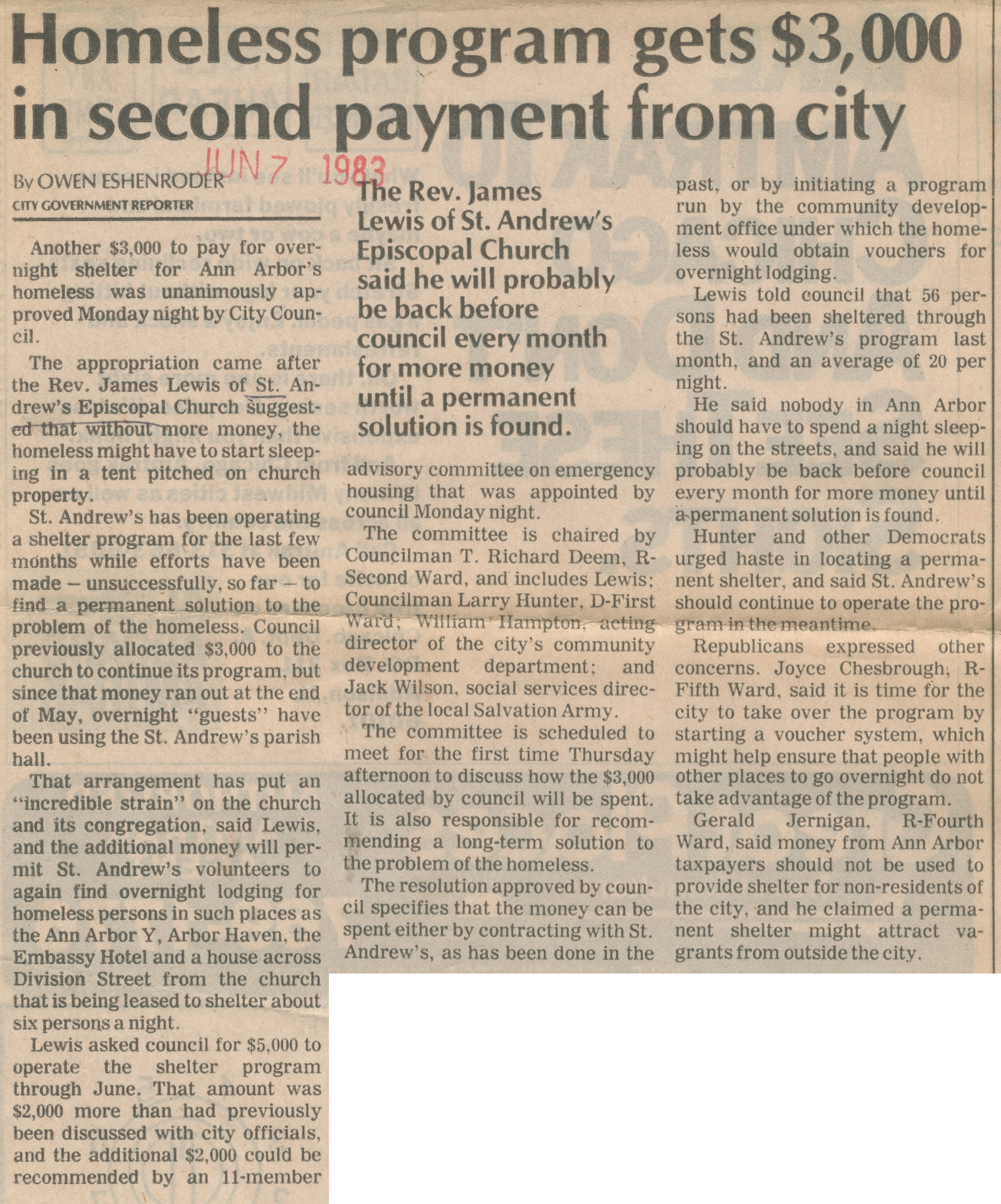 ﻿Homeless program gets $3,000 in second payment from city

Another $3,000 to pay for overnight shelter for Ann Arbor’s homeless was unanimously approved Monday night by City Council.

The appropriation came after the Rev. James Lewis of St. Andrew’s Episcopal Church suggested that without more money, the homeless might have to start sleeping in a tent pitched on church property.

St. Andrew’s has been operating a shelter program for the last few months while efforts have been made - unsuccessfully, so far - to find a permanent solution to the problem of the homeless.  Council previously allocated $3,000 to the church to continue its program, but since that money ran out at the end of May, overnight "guests" have been using the St. Andrew's parish hall.

That arrangement has put an "incredible strain" on the church and its congregation, said Lewis, and the additional money will permit St. Andrew's volunteers to again find overnight lodging for homeless persons in such places as the Ann Arbor Y, Arbor Haven, the Embassy Hotel and a house across Division Street from the church that is being leased to shelter about six persons a night.

Lewis asked council for $5,000 to operate the shelter program through June. That amount was $2,000 more than had previously been discussed with city officials, and the additional $2,000 could be recommended by an 11-member advisory committee on emergency housing that was appointed by council Monday night.

The committee is scheduled to meet for the first time Thursday afternoon to discuss how the $3,000 allocated by council will be spent. It is also responsible for recommending a long-term solution to the problem of the homeless.

The resolution approved by council specifies that the money can be spent either by contracting with St. Andrew's, as has been done in the past, or by initiating a program run by the community development office under which the homeless would obtain vouchers for overnight lodging.

Lewis told council that 56 persons had been sheltered through the St. Andrew's program last month, and an average of 20 per night.

He said nobody in Ann Arbor should have to spend a night sleeping on the streets, and said he will probably be back before council every month for more money until a permanent solution is found.

Hunter and other Democrats urged haste in locating a permanent shelter, and said St. Andrew's should continue to operate the program in the meantime.

Republicans expressed other concerns.  Joyce Chesbrough, R-Fifth Ward, said it is time for the city to take over the program by starting a voucher system, which might help ensure that people with other places to go overnight do not take advantage of the program.

Gerald Jernigan, R-Fourth Ward, said money from Ann Arbor taxpayers should not be used to provide shelter for non-residents of the city, and he claimed a permanent shelter might attract vagrants from outside the city.