A2 Meets Greektown at the Parthenon 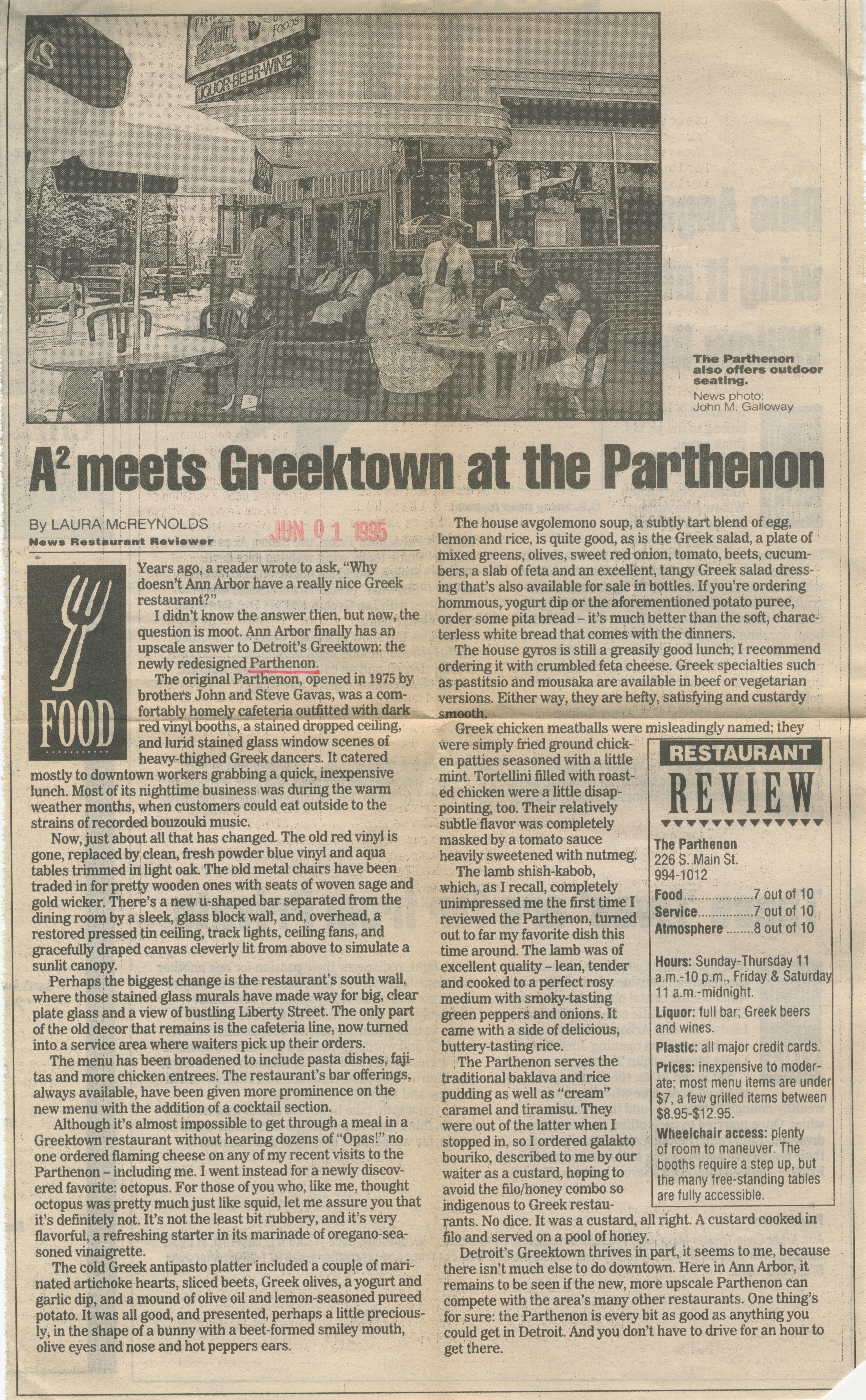 A2 Meets Greektown at the Parthenon

I didn't know the answer then. '-"A - -w, the
question is moot. Ann Arbor fina n
upscale answer to Detroit's Greektown; the
newly redesigned Parthenon.

The original PartHenon, opened in 1975 by
brothers John and ^w Gavas, was a com-
fortably homely cai utfitted with dark
red vinyl b--^-~ "——'-'ceiling,
and lurid esof
heavy-thighed Greek dancers. It catered
mostly to downtown workers grabbing a quick, inexpensive
lunch. Most of its night -iness was during the warm
weather month® w»w >y..iers could eat outside to the
strains ot iki music.

Perhaps the biggest change is the rest 's south wall,
where those stained glass murals have n y for big, clear
plate glass and a view of bustling Liberty Street. The only part
of the old decor that remains is the cafeteria line, now turned
into a service area where waiters pick up their orders.

The menu h-,- h~"n broadened to include pasta dishes, faji-
tas and n entrees. The restaurant's bar offerings,
able, have been given more prominence on the
with the addition of a cocktail section.
Although it's a' ^possible * "ough a meal in a
Greektown restau: ™.».. -ihout heani^ .lumens of "OpasF no
one ordered flaming cheese on any of my recent visits to the
Parthenon - including me. I went instead for a new''"r1'cov-
ered favorite: octopus. For those of you who, like i ght
octopus was pretty much just like squid, let me assure you that
it's definitely not. It's not the least bit rubbery, and it's very
flavorful, a refreshing starter in its marinade oforegano-sea-
sonedvinflw^te.

' It was all good, and presented, perhaps a little precious-
; .; i ne shape of a bunny with a beet-formed smiley mouth,
olive eyes and nose and hot peppers ears.

order some pita bread - it's much better than the soft, charac-
terless white bread that comes with the dinners.

The house gyros is still a greasily good lunch; I reconr
ordering it with crumbled feta cheese. Greek specialties _ .,
as pastitsio and mousaka are available in beef or vegetarian
versions. Either way, they are hefty, satisfying and custardy
smooth. __L

The lamb shish-kabob, 9941012
which, as I recall, completely
unimpressed me the first time I
review^ ^o Parthenon, turned
out to avorite dish this
time around. The lamb was of

excellent quality - lean, tendi Sunday-Thursday 11 j
and cooked to a perfect rosy tt'" -'° P m • ^'^V & Saturday]
medium with smoky-tasting 11 a.m.-midnight.
green peppers and onions. It Liquor: full bar; Greek beers
came with a side of delicious, and wines.
buttery-tasting rice. Plastic: all major credit cards.
^ The Parthenon serves the p^gg; inexpensive to moder-
traditional baldava and nc^ 3^ ^ ^u items are under
pudding as well as "cream" $7 g ^w grilled items between
caramel and tiranusu. They $3 95.^ ^ 95

booths require a step up, but
•"e many free-standing tables
.ire fully accessible.

waner as a custard, hrr-- - *-
avoid the filo/'hone:,
indigenous to Greek restau-

rants. No dice. It was a custard, all right. A custard cooked in
filo and served on a pool of honey.

Petroit's Greektown thrives in part, it seems to me, because
there isn't much else to do downtown. Here in Ann Arbor, it

; iher restaurants. One thing's
for sure: the Parthenon is every bit as good as anything you
could get in Detroit. And you don't have to drive for an hour to
get there.