If you like movies, you've come to the right town 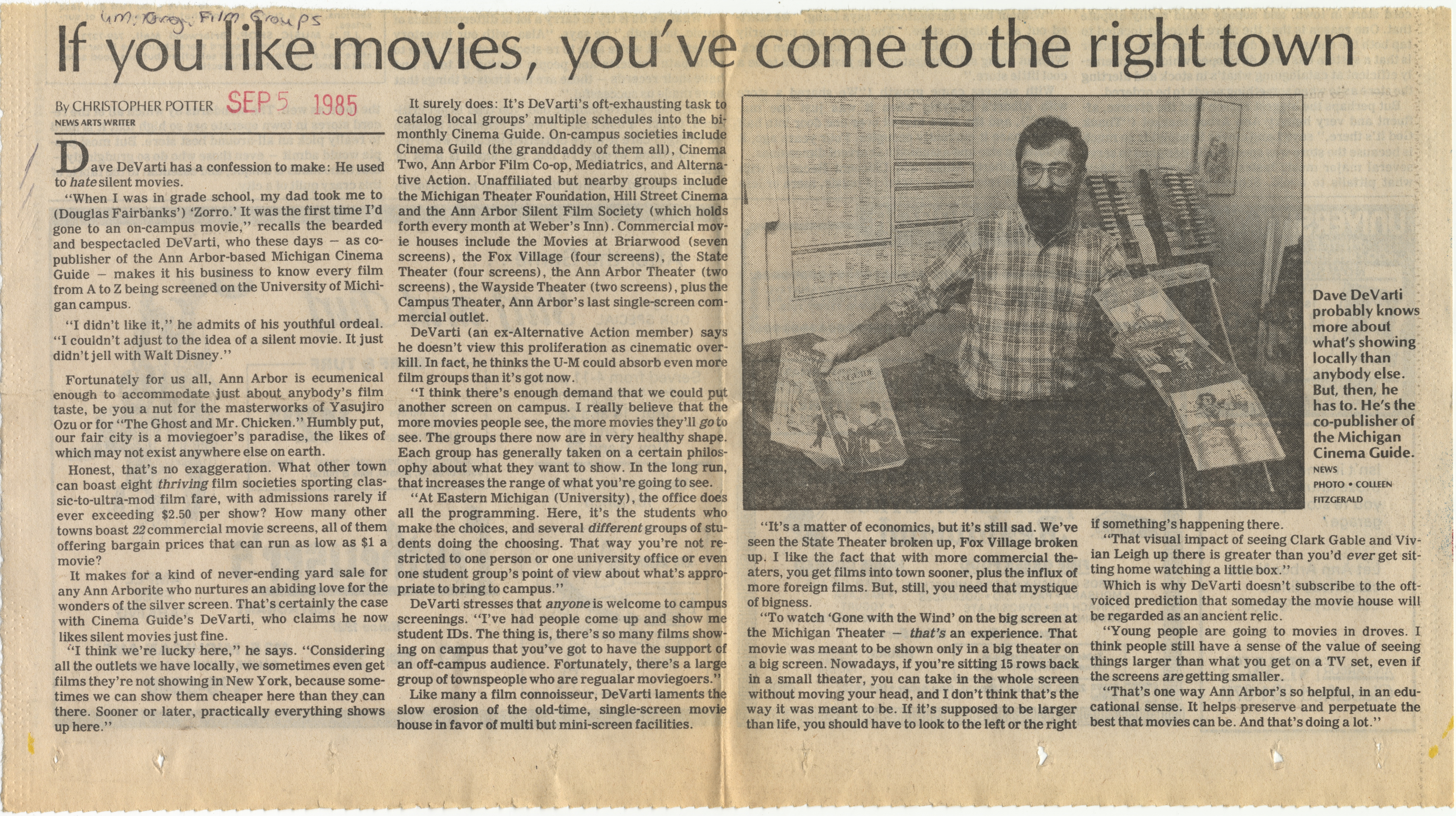 If you like movies, you've come to the right twon

lies into the bl-
ocieties include
i Uiem all). Cinema

"When I was in grade schoo'
(Douglas Fairbanks') 'Zorro.' 1
gone to an on-campus movie.
and bespectacled DeVarti, win,

i to make: He used Two. Ann Arbor Film Co-op, Mediatrics, and Alterna-
tive Action. Unattiliated but nearby groups include

ex-Alternative Action member) says
!: i cinematic over-
i'sorb even more

publisher of the Ann Arbor-based Michigan i
Guide - makes it his business to know evn
from A to Z being screened on the University of '
gan campus.

"I didn't like it," he admits of his youthful ordeal
"I couldn't adjust to the idea of a silent movie. It just
didn't jell with Walt Disney."

Fortunately for us all, Ann Arbor is ecumenical i .;

enough to accommodate just about anybody's film "I think there's enough demand that we could put
taste, be you a nut tor the masterworks of Yasujiro another screen on campus. I really believe that the
Ozu or tor "The Ghost and Mr. Chicken." Humbly put, more movies people see, the more movies they'll go to
our fair city is a moviegoer's paradise, the likes of see. The groups there now are in very healthy shape.
which may not exist anywhere else on earth. Each group has generally taken on a certain phllos-

Honest, that's no exaggeration. What other town ophy about what they want to show. In the long run,
can boast eight thriving film societies sporting clas- that increases the range of what you're going to see.
sic-to-ultra-mod film fare, with admissions rarely if "At Eastern Michigan (University), the office does
ever exceeding $2.50 per show? How many other all the programming. Here, it's the students who
towns boast 22 commercial movie screens, all of them make the choices, and several different groups of stu-
offering bargain prices that can run as low as $1 a dents cl "oslng. That way you're not re-
movie? stricte"; i or one university office or even

It makes for a kind of never-ending yard sale tor one stud-1; • i pnu.t of view about what's appro-
any Ann Arborlte who nurtures an abiding love (or the priate to bring to campi;

wonders of the silver screen. That's certainly the case DeVarti stresses tha -
with Cinema Guide's DeVarti. who claims he now screenings. "I've had ,. •••••
liitessilentmoviesjustfine. ••' • •-- The thing is, mere s so many mms snow-

"It's a matter of economics, but it's still sad. We've
seen the State Theater broken i • Fin vill-i.—iniiken
up. I like the fact that with :.-?-
aters, you get films Into town • of
more foreign films. But, still, you need that mystique
of bigness.

"To watch 'Gone with the Wind' on the big screen at
the Michigan Theater '.'" ;i experience. That
movie was meant to in a big theater on
a big screen. Nowad: Ating 15 rows back
in a small theater, yuu ^011 innc in the whole screen
without moving your head, and I don't think that's the
way it was meant to be. If it's supposed to be larger
than life, you should have to look to the left or the right

It something's happening there.

"That visual Impact of seeing dark Gable and Vi'
lan Leigh up there is greater than you'd ever get sit-
ting home watching a little box."

Which is why DeVarti doesn't subscribe to the oft-
voiced prediction that someday the movie house will
be regarded as an ancient relic.

"Young people are going to movies in droves I
think people still have a sense of the value of seeing
things larger than what you get on a TV set, even if
the screens are getting smaller