'On the Road' film series traces Japanese out of their element 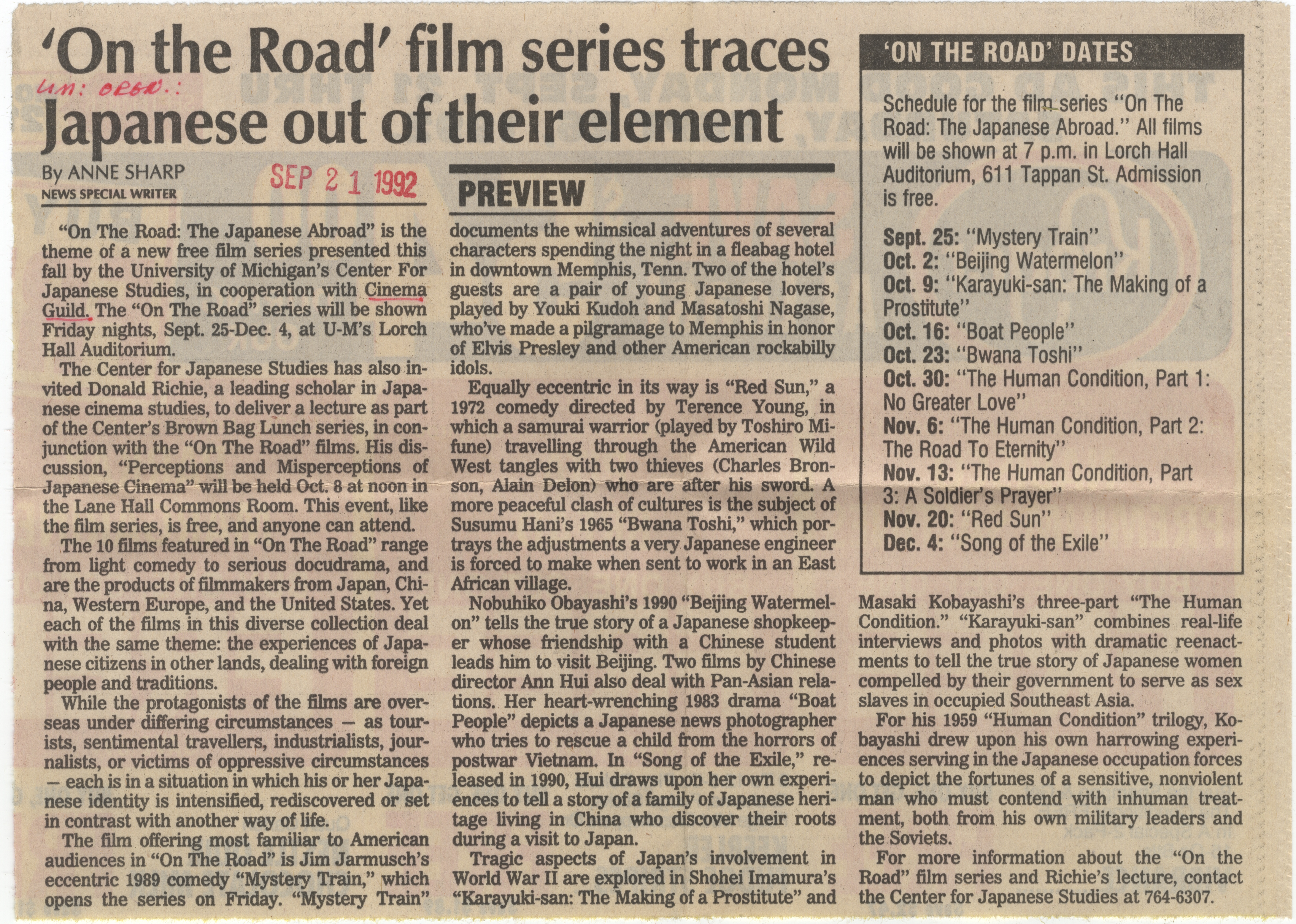 "On The Road: The Japanese Abroad" is the
theme of a new free film series presented this
fall by the University of Michigan's Center For
Japanese Studies, in cooperation with Cinema
Guild.. The "On T series will'
Friday nights, S c. 4, at U-?
Hall Auditorium.

The Center for Japanese Studies has also in-
vited Donald Richie, a leading scholar in Japa-
nese cinema studies, to deliver a lecture as part
of the Center's Brown Bag Lunch series, in con-
junction with the "On The Road" films. His dis-
cussion, "Perceptions and Misperceptions of
—.fepaBese-Cinema" will be held Oct. 8 at noon in
the Lane Hall Commons Room. This event, like
the film series, is free fend.

The 10 films feature 'ange
from light comedy to serious aocuorama, r"•"
are the products of filmmakers from Japan,'
na. Western Europe, and the United States. Vc<,
each of the films in this diverse collection deal
with the same theme: the experiences of Jana-
nese citizens in other lands, dealt;

While the protagonists of the films
seas under differing circumstances-
jcii.; .. i,i,s, vellers, industrialists, jour-
r oppressive circumstances
— eacn is in a situation in which his or her Japa-
nese identity is intensified, rediscovered or set
in contrast with another way of life.

The film offering most familiar to American
audiences in "On Thp Rnad" is Jim Jarmusch's
eccentric 1989 c' lystery Train," which
^_dpens the series on rnday. "Mystery Train"

documeis " il adventures of several
character L, •••' night in a fleabag hotel
in downtown Memphis, T 'of the hotel's
guests are a pair of VL .inese lovers,
by Youki Kudoh and Masatoshi Nagase,
nade a pilgramage to Memphis in honor
of Eivis Presley and other American rockabilly
idols.

Tragic __r_, J of Japan's involvement in
Worid War II are explored in Shohei Imamura's
"Karayuki-san: The Making of a Prostitute" and

'ON THE ROAD' DATES

Schedule for the film series "On The
Road: The Japanese Abroad." All films
will be shown at 7 p.m. in Lorch Hall
Auditorium, 611 Tappan St. Admission
is free.

The Road To Eternity"

For his 1959 "Human Condition" trilogy, Ko-
bayashi ' oon his own harrowing experi-
ences the Japanese occupation forces
to depici um untunes of a sensiti- —"—olent
man who must contend with i; reat-
ment, both from his own military ,eii(,c.s and
the Soviets.

For more information about the "On the
Road" film series and Rich ntact
the Center for Japanese Stuuic.i in iw-wu7.