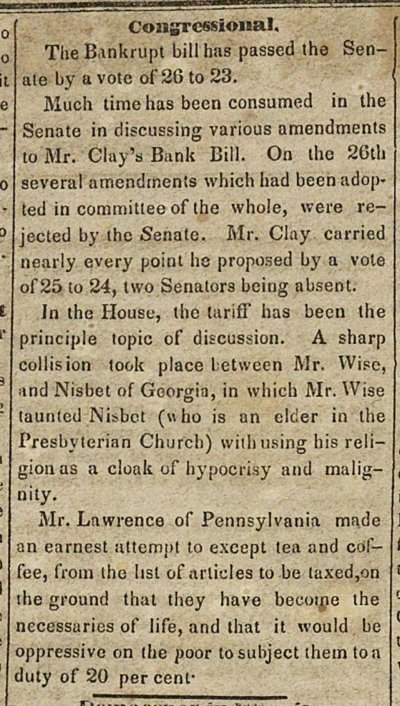 The B.inkrupt bilÃ­ has passed the Senate by a vote of 26 to 23. Much time has been consumed in the Senate in cÃ¼scussing various amendments to Mr. Clay's Bank Bili. On the 2Gth several amendments which had been adopted in committeeof the whole, were rejected by the Senate. Mr. Clay carried nearly every point ho proposed by a vote of25 to 24, two Senators being absent. In the House, the tarifl has been the principie topic of discussion. A sharp collis ion look place L-etwccn Mr. Wree, ind Nisbet of Georgin, in which Mr. Wise taunted Nibbct (u ho is an eider in the Presbyterian Church) withusing his religiÃ³n as a cloak of hypocrisy and malignity. Mr, Lawrence of Pennsylvania made an earnest attempt to except tea and cÃ³ffee, from the list of anieles to be taxed,on the ground that they have become the nccessuries of life, and that it would be oppressive on the poor lo subject them toa duty of 20 per