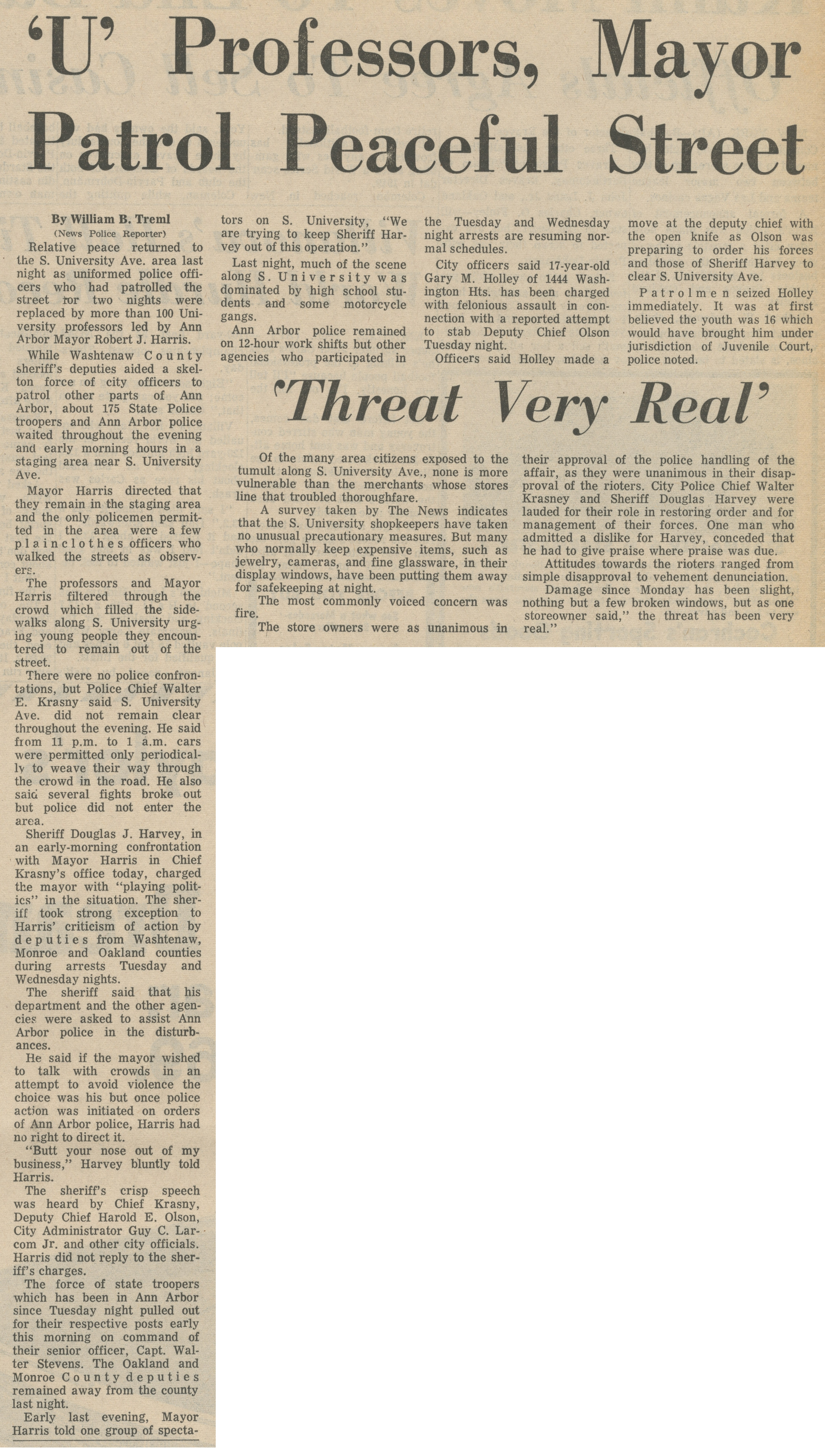 ^IT Professors, Mayoi Patrol Peaceful Street By William B. Treml < News Police Reporter) Relative peace returned to the S. University Ave. area last night as uniformed police offi- cers who had patrolled the street tor two nights were replaced by more than 100 Uni- versity professors led by Ann Arbor Mayor Robert J. Harris. While Washtenaw County sheriff's deputies aided a skel- ton force of city officers to patrol other parts of Ann Arbor, about 175 State Police troopers and Ann Arbor police waited throughout the evening and early morning hours in a staging area near S. University Ave. Mayor Harris directed that they remain in the staging area and the only policemen permit- ted in the area were a few plainclothes officers who walked the streets as observ- ers. The professors and Mayor Harris filtered through the crowd which filled the side- walks along S. University urg- ing young people they encoun- tered to remain out of the str'ppl- 're no police confron- blioii., but Police Chief Walter E. Krasny said S. University Ave. did not remain clear throughout the evening. He said from 11 p.m. to 1 a.m. cars wes itted only periodical- ly i- ve their way through the crowd in the road. He also saia several fights broke out 'ut police did not enter the yrea. Sheriff Douglas J. Harvey, in an early-morning confrontation with Mayor Harris in Chief Krasny's office today, charged the mayor with "playing polit- ics" in the situation. The sher- iff took strong exception to Harris' criticism of action by deputies from Washtenaw, Monroe and Oakland counties during arrests Tuesday and Wednesday nights. The sheriff said that his department and the other agen- cies were asked to assist Ann Arbor police in the disturb- inces. He said if the mayor vvs^tnu to talk with crowds in an attempt to avoid violence the choice was his but once police action was initiated on orders of Ann Arbor police, Harris had no right to direct it. * r our nose out of my bu^iti -. Harvey bluntly told Harris. The sheriff's crisp speech was heard by Chief Krasny, Deputy Chief Harold E. Olson, City Administrator Guy C. Lar- com Jr. and other city officials. Harris did not reply to the sher- iffs charges. The force of state troopers which has been in Ann Arbor since Tuesday night pulled out for their respective posts early this morning on command of their senior officer, Capt. Wal- ter Stevens. The Oakland and Monroe County deputies remained away from the county last night. Early last evening, Mayor Harris told one group of specta- tors on S. University, "We are trying to keep Sheriff Har- vey out of this operation." Last night, much of the scene along S. University was dominated by high school stu- dents and some motorcycle gangs. Ann Arbor police remained on 12-hour work shifts but other agencies who participated in the Tuesday and Wednesday night arrests are resuming nor- mal schedules. City officers said 17-year-old Gary M. Holley of 1444 Wash- ington Hts. has been charged with felonious assault in con- nection with a reported attempt to stab Deputy Chief Olson Tuesday night. Officers said Holley made a move at the deputy chief with the open knife as Olson was preparing to order his forces and those of Sheriff Harvey to clear S. University Ave. Patroime n seized Holley immediately. It was at first believed the youth was 16 which would have brought him under jurisdiction of Juvenile Court, police noted. ^Threat Very-Real9 Of the many area citizens exposed to the tumult along S. University Ave., none is more vulnerable than the merchants whose stores line that troubled thoroughfare. A survey taken by The News indicates that the S. University shopkeepers have taken no unusual precautionary measures. But many who normally keep expensive items, such as jewelry, cameras, and fine glassware, in their display windows, have been putting them away for safekeeping at night. The most commonly voiced concern was fire. The store owners were as unanimous in their approval of the police handling of the affair, as they were unanimous in their disap- proval of the rioters. City Police Chief Walter Krasney and Sheriff Douglas Harvey were lauded for their role in restoring order and for management of their forces. One man who admitted a dislike for Harvey, conceded that he had to give praise where praise was due. Attitudes towards the rioters ranged from simple disapproval to vehement denunciation. Damage since Monday has been slight, nothing but a few broken windows, but as one storeowner said," the threat has been very real." ...i——aim