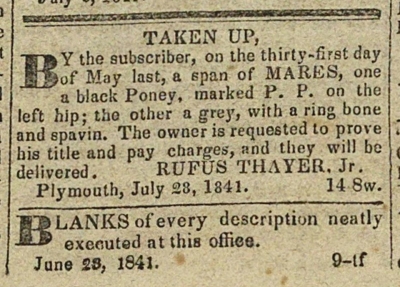 "TAKEÃ UP, BY the subscriber, on the thirty-first day of May last, a span of MARES, one a black Poney, marked P. P. on the left hip; tho other a gre}', with a ring bone and 8pavin. The owner is requested to prove !iis tille and pay charges, nnd thcy will be delivered. RUFÃS THAYER, Jr. Plymouth, July 28, 1841. 14 8w. "KiLANKS of every dcscription neatly -' exeouted at this offiee. June 28, 1841. 9-tf MORTGAGE SALE. FfcEFAULT having been made in the H Mr condition of a Mortgage executed by Rufus Crosman and Lucy Lis wife, to the undersigned, January fifteenth, eighteen hundred and thirty eight, and Recor. ded in the Registers office, in ihe county of Wushtenaw, in LÃ­ber No. seven, page three hundred and one, of the equal undivided half of the "Scio Mili property," including the water-power, Mills and Machinery.and about twentyfive acres onand.aojoining the village of Scio, in eaid county, and lying on both sidea of the River Huron, together with the rights of flovving lands covered by iho tnill pond, (for a more particular dcscription of the premisos reference is made to the record of said mortgage,) and no proceedings at law having been instituted to collect the debt secured by said Morlgage or any part thereof. Notice is hereby given, that said Mort-v gage will be fortjclosed by a sale of the mortgogod premiees (or some part of themj at public vendue at the Court House, in Aun Arbor, in said county on the eixteenthdny of November next, at noon. SA&ÃUL W. FOSTER Mortgagee. Kingsley & Morgan, Atty's. Daied Scio, August fUl, 184.1. THRESHING MACHINES, HQRSE POWER, MILLS, kc. THE undersigned are manufacturingand will keep.coustantly on hand at their ehop tvvoÃ­hda hall' miles west of Ann Arbor, near tbc Rail Road, HORSE POVVERS ana THREylllNG MACHINES The horse power is a naw invention by S. W. Foster, and s dccidedly superior to any thing of tlie kind ever beforo oflered to the Public. The pnce of a Four Jlorso Power, with a good Tkreshing Machine is lSiO dollars, at the shop; wilhout tlie Machine, ninety dollars. These Horse Powers can be used with two, ihree or four horses to good advantage. Three men with two horses, can thresh one huodred bushels of wheat per day (f it yields middiing wel),) and it will not be hard work for the horses. The Horse Power and Thresher can botji'be put in a common waggon box, and drawn tny distance by two horses. The Two Horse Power will be eold at the shop, with the Thresher for one hundred dollars; without the Thresher, for seventy-five dollars. They also manufacture STRAW CUTTERS, recemly invented by S. W. Foster, wtiich are decidedly preferable to any otherB for cuiting straw or corn stalks, by hoxse or water power. They also work by hand.-? Price, iifteen dollars. - ALSO- CAST-IRON MILLS for grinding provender, at the rate of six to eight bushels per liour, with two horses or by water. - Also- (Er'SMUT MACHINES of superior con struction. Invented by S. W. Foster.- Price, sixty dollars. S. W. FOSTER, k Co. Scio, June 2Ã¡, 1841. 10-ly