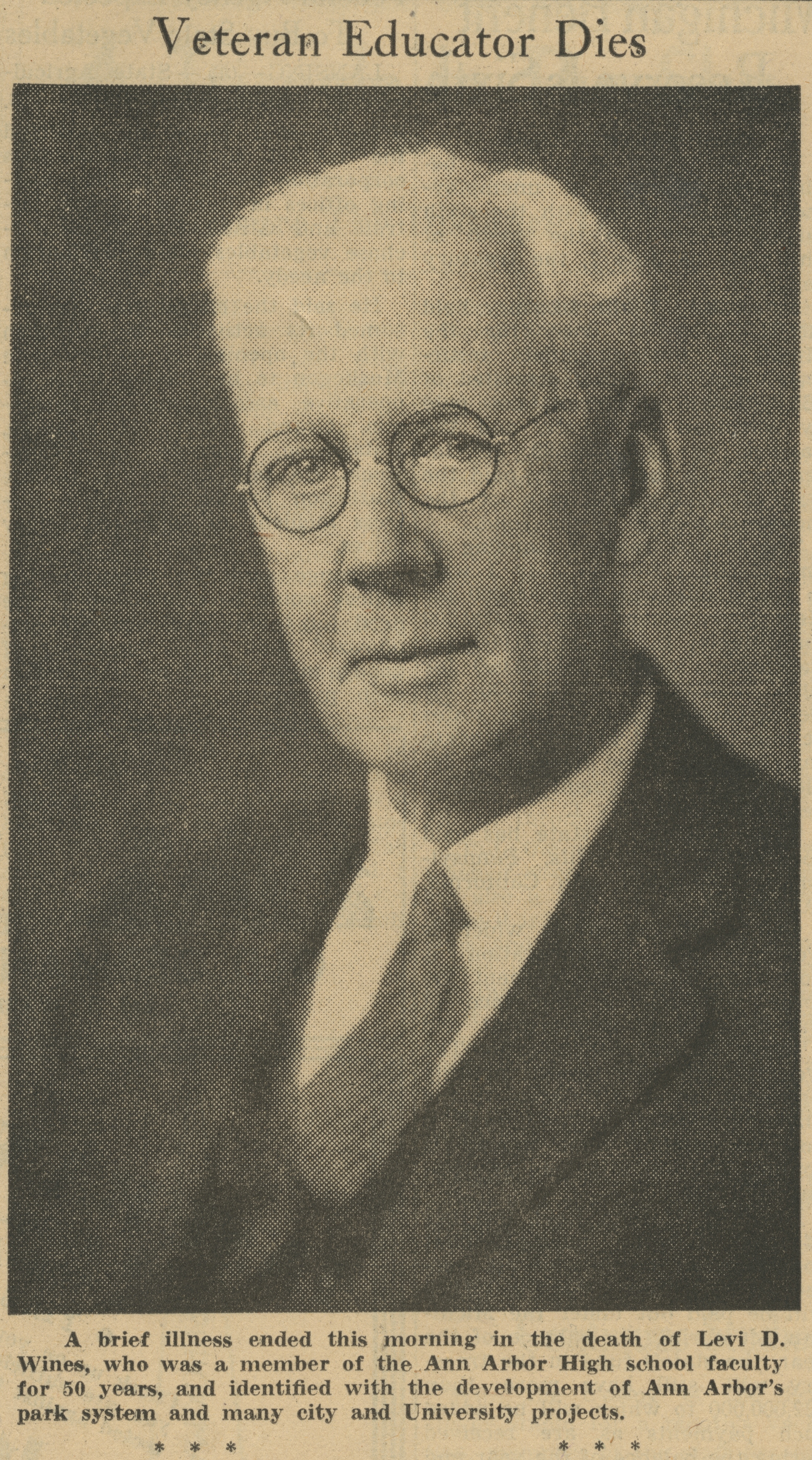 Levi Douglas Wines, whose contributions to Ann Arbor's progress
included 50 years as a teacher on the high school faculty years, 33
years as a city park commissioner, and almost 50 years association
with the University school of music, died at 11:40 this morning in
St. Joseph's Mercy hospital.

Mr. Wines, who had been in failing health the last two years, had
been seriously ill only two weeks and entered the hospital about a
week ago. He was 86 years old.

The Wines home is at 830 E.University Ave.

Youth and its problems were major interests of Mr. Wines
throughout his life. He was brought into close contact with the youth
of the city for 50 years as a teacher on the Ann Arbor High school
faculty. He headed the mathematics department of the school for
a number of years.

His other activities and contributions to the city's welfare were
allied with his interests in youth.
Chiefly these were service on 1 hp

city park board, on the advisory
board of the high school athletic
association and as the Ann Arbor
representative of the National Rec-
reation on.

Combms-d slicse represented 89
years of public service—three
years more than his actual age.
In addition he had been treasurer
of the University school of music
since 1890, and in this capacity
presented checks for payment for
services to the many concert ar-
tists who performed in Hill audi-
torium. Mr. Wines was one of the
group active in the movement
which result i"'i in the establish-
ment of the •!' music.

His record or au years on the
faculty of Ann Arbor High school
is outstanding in the annals of the
teaching profession. His letter of
resignation in 1.930 gave ill health
as the reason but this did not end
his service to the public school
system. He accepted the role of
historian and in the intervening
years had been preparing a monu-
mental work on the history of
education in Ann Arbor.

This volume is about completed
and will become a permanent me-
morial to the veteran teacher. His
name also is perpetuated in Wines
field, the high school athletic field,
which was named in his honor.

Mr. Wines was one of the last of
the living charter members of the
Michigan Schoolmaster's club
which he had served as president.
He also was one of the original
city park bori' ' •"•••"hers and was
a member at ' of his death,
a record of 33 yea is. He was one
of the fathers of the local park
system.

He served 40 years on the ad-
visory board of the high school
athletic association, and 16 years
as local representative of the Na-
tional Recreation association.

Other public service included
two terms on ^ the. city council
and a term as president of the
council.

He was active in the engineering
field for five years before joining
the high school faculty. He was th£
author of several mathematical
texts and had done considerable
work in astronomy having con-
structed his own observatory at
one time on the site of the present
University observatory.

Funeral arrangements have not
been completed.