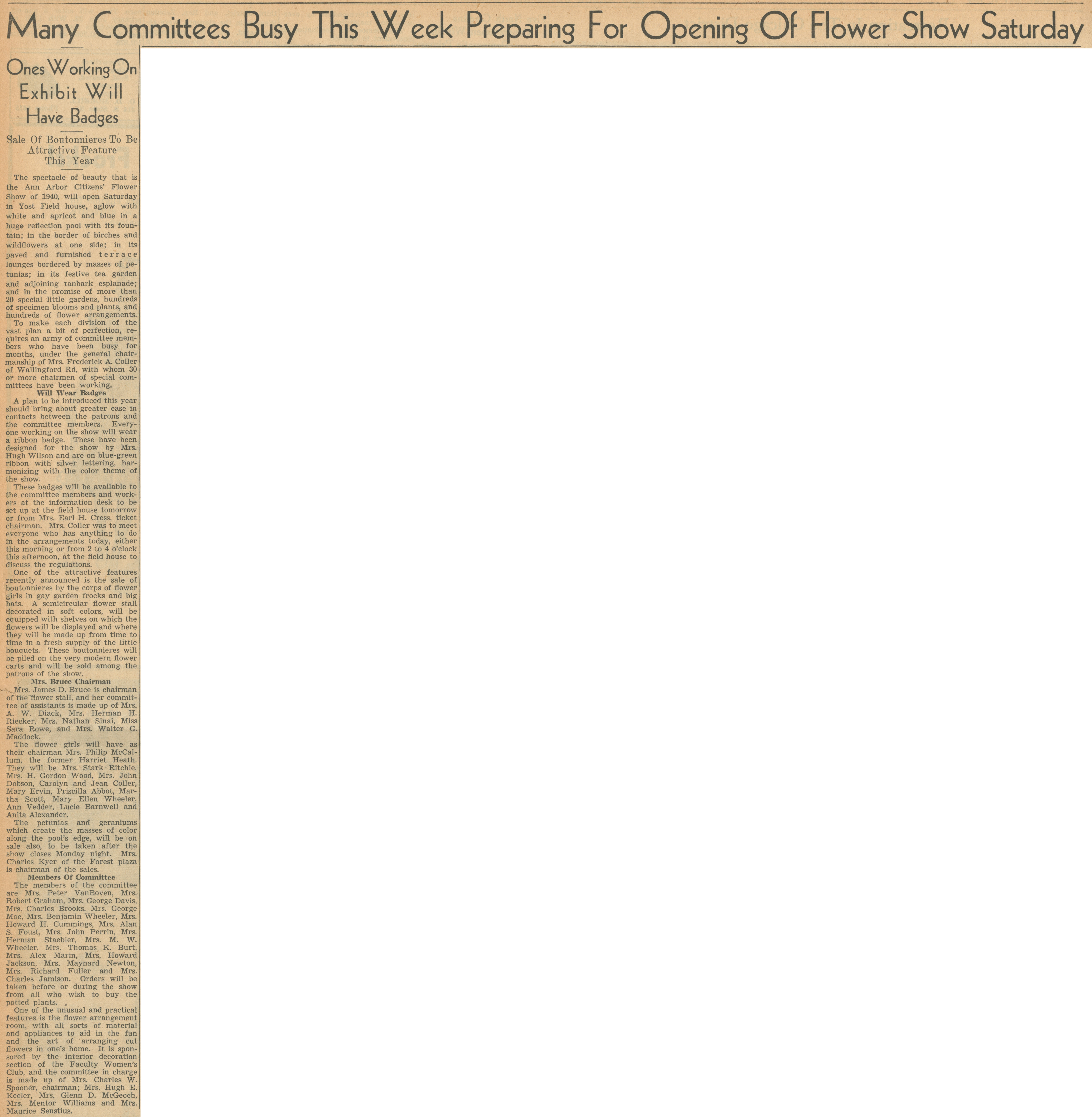 Ones Working On Exhibit Will Have Badges

Sale Of Boutonnieres To Be Attractive Feature This Year

The spectacle of beauty that is the Ann Arbor Citizens’ Flower Show of 1940, will open Saturday in Yost Field house, aglow with white and apricot and blue in a huge reflection pool with its fountain; in the border of birches and wildflowers at one side; in its paved and furnished terrace lounges bordered by masses of petunias; in its festive tea garden and adjoining tanbark esplanade; and in the promise of more than 20 special little gardens, hundreds of specimen blooms and plants, and hundreds of flower arrangements.

To make each division of the vast plan a bit of perfection, requires an army of committee members who have been busy for months, under the general chairmanship of Mrs. Frederick A. Coller of Wallingford Rd. with whom 30 or more chairmen of special committees have been working.

A plan to be introduced this year should bring about greater ease in contacts between the patrons and the committee members. Everyone working on the show will wear a ribbon badge. These have been designed for the show by Mrs. Hugh Wilson and are on blue-green ribbon with silver lettering, harmonizing with the color theme of the show.

These badges will be available to the committee members and workers at the information desk to be set up at the field house tomorrow or from Mrs. Earl H. Cress, ticket chairman. Mrs. Coller was to meet everyone who has anything to do in the arrangements today, either this morning or from 2 to 4 o’clock this afternoon, at the field house to discuss the regulations.

One of the attractive features recently announced is the sale of boutonnieres by the corps of flower girls in gay garden frocks and big hats. A semicircular flower stall decorated in soft colors, will be equipped with shelves on which the flowers will be displayed and where they will be made up from time to time in a fresh supply of the little bouquets. These boutonnieres will be piled on the very modern flower carts and will be sold among the patrons of the show.

Mrs. James D. Bruce is chairman of the flower stall, and her committee of assistants is made up of Mrs. A. W. Diack, Mrs. Herman H. Riecker, Mrs. Nathan Sinai, Miss Sara Rowe, and Mrs. Walter G. Maddock.

The petunias and geraniums which create the masses of color along the pool’s edge, will be on sale also, to be taken after the show closes Monday night. Mrs. Charles Kyer of the Forest plaza is chairman of the sales.

One of the unusual and practical features is the flower arrangement room, with all sorts of material and appliances to aid in the fun and the art of arranging cut flowers in one’s home. It is sponsored by the interior decoration section of the Faculty Women’s Club, and the committee in charge is made up of Mrs. Charles W. Spooner, chairman; Mrs. Hugh E. Keeler, Mrs. Glenn D. McGeoch, Mrs. Mentor Williams and Mrs. Maurice Senstius.