The Slave Trade Abolished By The Bey Of Tunis 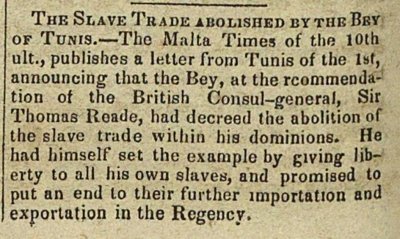 uit., puDiisnes a letter lrom Tunis oÃ­ the lst, announcing that the Bey, at the rcommendaion of the British Consul-general, Sir Thomas Roade, had decreed the aboÃ¼tion of he slave trade witlijn his dominions. He Ã¯ad himself eet the example by giving1 liberty to all his own slaves, and promised to put an end to their fuither importation and exportation in the Rcgency.