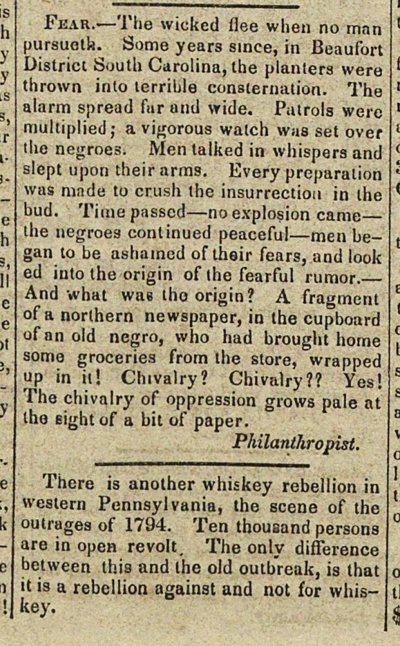 -The wicked flee when no manpursuotk. Ã­Ã¡ome years since, in Beaufort District South Carolina, the planters were , thrown into terrible consiernation. The alarm spread fur and wide. Patrols werc ' multiplied; a vigorous walch was set over tlie negroes. Men talked in whispers and slept upon their arms. Every preparalion was made to crush the insurrectiou in the , bud. Timepasscd - no explosiÃ³n carne - the negroes conlinued peaceful - men bega n to be ashamed of their fears, and look ed uto the origin ofthefearful rumor. And what was tho origin? A fragment of a northern newspaper, in the cupboard ofanold negro, who had brought home some groceries from the store, wrapped 1 up in il! Chivalry? Chivalry?? Yes! The chivalry of oppression grows pale at the sightof a bit of paper.Philanthropist. There is another whiskey rebellion in western Pennsylvania, the scÃ¨ne of the outrages of 1794. Ten thousand persons are in open revolt. The only difference between this and the old ouib'reak, is that it is a rebellion against and not for whiskey.