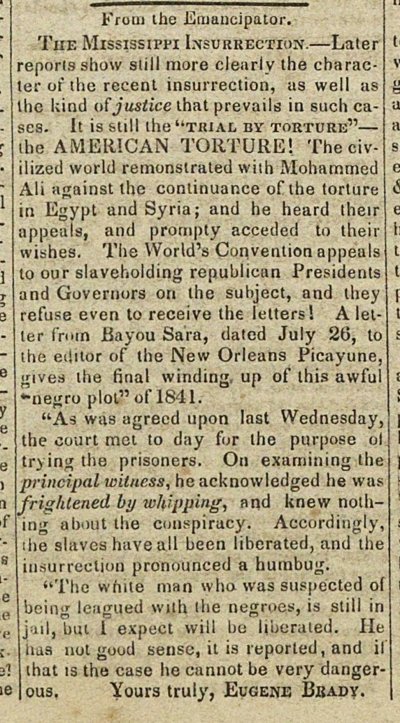 Laterreporis show still more clearly the cbaracler of the recent insurrection, as well is Ihc kind ofjustice that prevailÃ¶ ia such cases. It is still the "trial by torture" - the AMERICAN TORTURE! The civilized world remonstrated wiih Mohammed Ali against the continuance of the torture in Egypt and Syria; and he heard their nppeulÃ¡, and prompty acceded to their wishes. The World's Convention appeals to our slaveholding republican Presidents and Governors on the subject, and they refuse even to receive the letters! A letter fr un Ã¼ayou Sara, dated July 26, to the eilitor of the New Orleans Picayune, gives the final winding, up of this awful -negro plot" of 1841. "As was agrecd upon last Wednesday, the coiirt met to day for the purpose o! trying the prisoners. On examining the principal witness, he acknowledged he was frightened by whipping, and knew nolhing a bout the cuuspirucy. Accordiugly, lie slÃ­ivcs have all been libcrated, and the insurreclion pronounced a humbug. "The white man who was suspected of being leagued with the negroes, iÃ¡ still in j ui, biu l expect will bc ljberuled. He baa not goud sensc, it is reported, and il that is the case he cannot be very