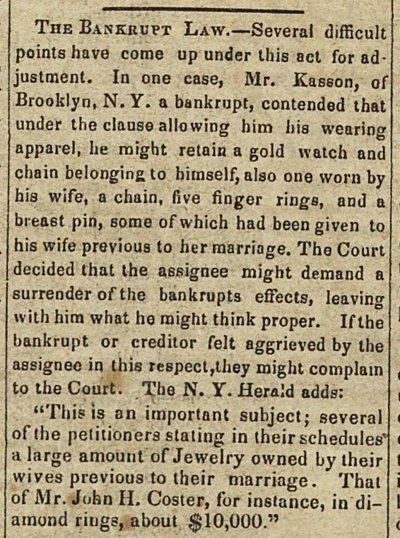 Several difficultpoims nave come up under this act for adjustment. Ã­n one case, Mr. Kaseon, of Brooklyn, N. Y. a bankrupt, contended that under the clause allowing him iiia wearin apparel, he roight retain a gold watch and chain belonginfi to himself, also one worn by bis wife, a chain, fiye finger rings, and a breaet pin, some of which had been given to his wife previoua to her marrioge. The Court decided that the assignee might demand a surrender ofthe bankrupts effects, leaving w.ith him what he raight think proper. If the bankrupt or creditor feit aggrieved by the assignee in this reepect,they might complam to the Court. The N. Y. Herald adds: "TliisÃ­s an important subject; several of the petitioners stating in their schedules a large amount of Jewelry ovvned by their wives previous to their marriage. That of Mr. John IL Coster, for instance, in diamond rings, about $10,000."