She Plans A LONG Distance Call 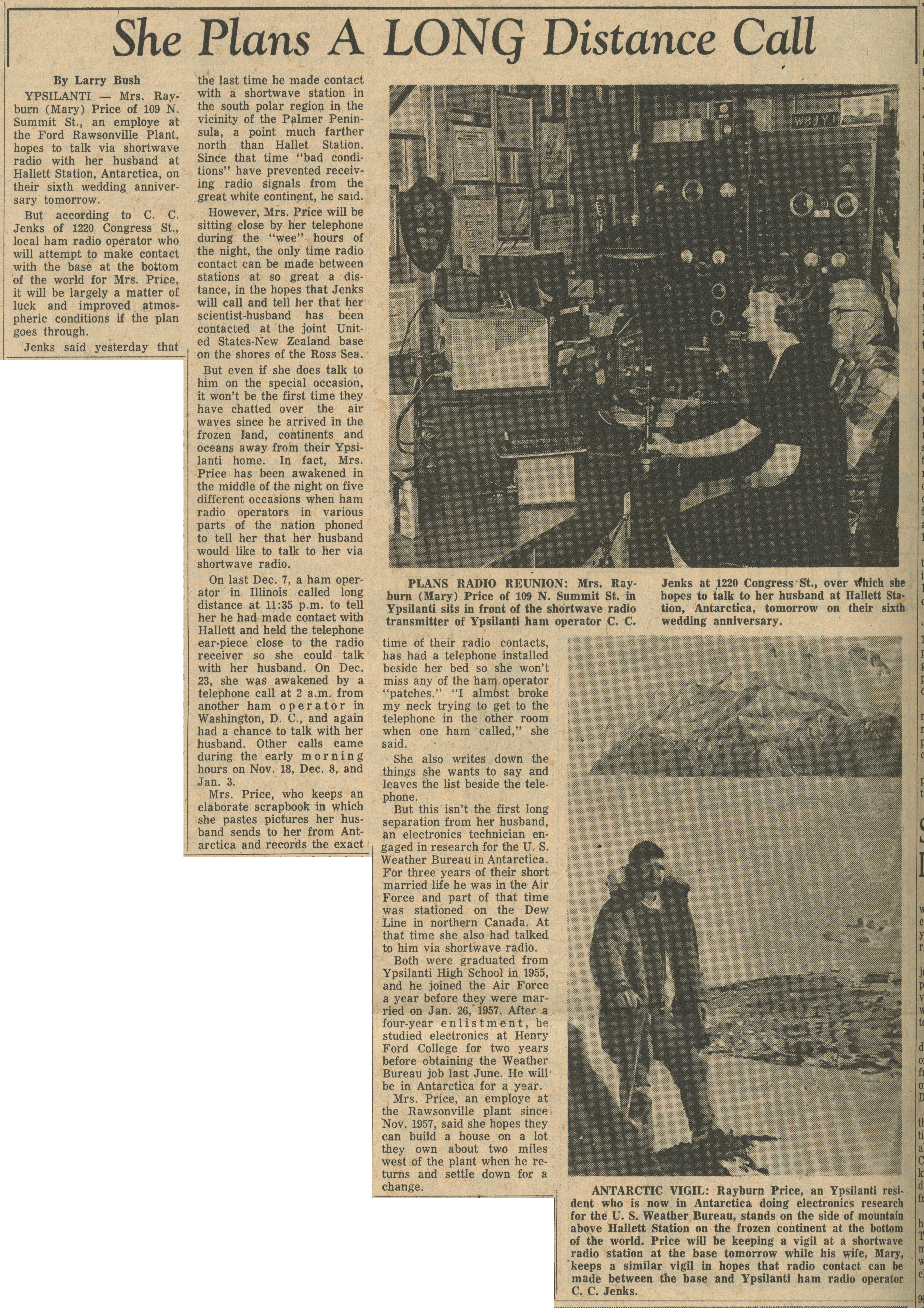 She Plans A LONG Distance Call
By Larry Bush
YPSILANTI - Mrs. Rayburn (Mary) Price of 109 N. Summit St., an employe at the Ford Rawsonville Plant, hopes to talk via shortwave radio with her husband at Hallett Station, Antarctica, on their sixth wedding anniversary tomorrow.
But according to C. C. Jenks of 1220 Congress St., local ham radio operator who will attempt to make contact with the base at the bottom of the world for Mrs. Price, it will be largely a matter of luck and improved atmospheric conditions if the plan goes through.
Jenks said yesterday that the last time he made contact with a shortwave station in the south polar region in the vicinity of the Palmer Peninsula, a point much farther north than Hallet Station. Since that time "bad conditions" have prevented receiving radio signals from the great white continent, he said.
However, Mrs. Price will be sitting close by her telephone during the "wee" hours of the night, the only time radio contact can be made between stations at so great a distance, in the hopes that Jenks will call and tell her that her scientist-husband has been contacted at the joint United States-New Zealand base on the shores of the Ross Sea.
But even if she does talk to him on the special occasion, it won't be the first time they have chatted over the air waves since he arrived in the frozen land, continents and oceans away from their Ypsilanti home. In fact, Mrs. Price has been awakened in the middle of the night on five different occasions when ham radio operators in various parts of the nation phoned to tell her that her husband would like to talk to her via shortwave radio.
On last Dec. 7, a ham operator in Illinois called long distance at 11:35 p.m. to tell her he had made contact with Hallett and held the telephone ear-piece close to the radio receiver so she could talk with her husband. On Dec. 23, she was awakened by a telephone call at 2 a.m. from another ham operator in Washington D.C., and again had a chance to talk with her husband. Other calls came during the early morning hours on Nov. 18, Dec. 8, and Jan. 3.
Mrs. Price, who keeps an elaborate scrapbook in which she pastes pictures her husband sends to her from Antarctica and records the exact time of their radio contacts, has had a telephone installed beside her bed so she won't miss any of the ham operator "patches". "I almost broke my neck trying to get to the telephone in the other room when one ham called," she said.
She also writes down the things she wants to say and leaves the list beside the telephone.
But this isn't the first long separation from her husband, an electronics technician engaged in research for the U. S. Weather Bureau in Antarctica. For three years of their short married life he was in the Air Force and part of that time was stationed on the Dew Line in northern Canada. At that time she also had talked to him via shortwave radio.
Both were graduated from Ypsilanti High school in 1955, and he joined the Air Force a year before they were married on Jan. 26, 1957. After a four-year enlistment, he studied electronics at Henry Ford College for two years before obtaining the Weather Bureau job last June. He will be in Antarctica for a year.
Mrs. Price, an employe at the Rawsonville plant since Nov. 1957, said she hopes they can build a house on a lot they own about two miles west of the plant when he returns and settle down for a change.