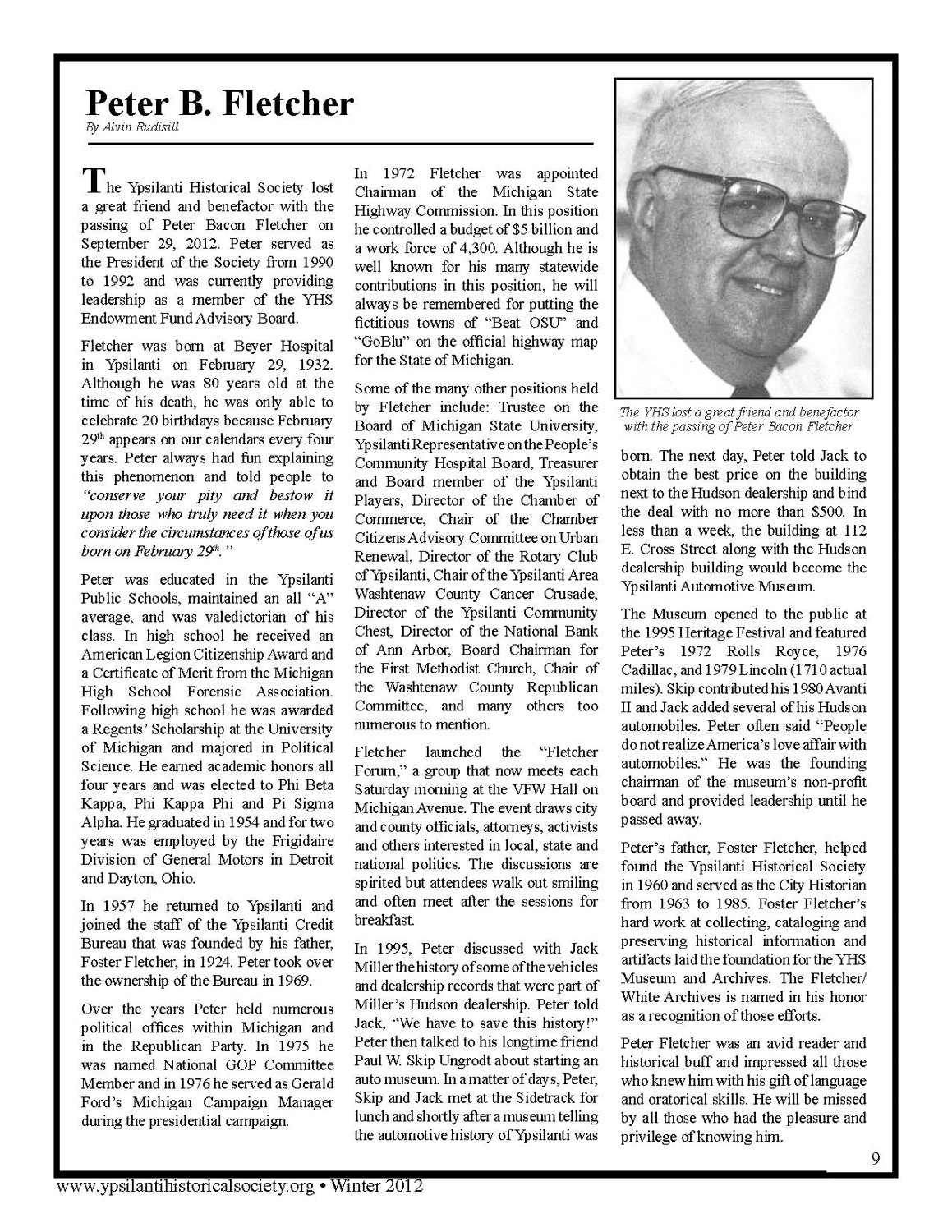 The Ypsilanti Historical Society lost a great friend and benefactor with the passing of Peter Bacon Fletcher on September 29, 2012. Peter served as the President of the Society from 1990 to 1992 and was currently providing leadership as a member of the YHS Endowment Fund Advisory Board. Fletcher was born at Beyer Hospital in Ypsilanti on February 29, 1932. Although he was 80 years old at the time of his death, he was only able to celebrate 20 birthdays because February 29th appears on our calendars every four years. Peter always had fun explaining this phenomenon and told people to “conserve your pity and bestow it upon those who truly need it when you consider the circumstances of those of us born on February 29th.” Peter was educated in the Ypsilanti Public Schools, maintained an all “A” average, and was valedictorian of his class. In high school he received an American Legion Citizenship Award and a Certificate of Merit from the Michigan High School Forensic Association. Following high school he was awarded a Regents’ Scholarship at the University of Michigan and majored in Political Science. He earned academic honors all four years and was elected to Phi Beta Kappa, Phi Kappa Phi and Pi Sigma Alpha. He graduated in 1954 and for two years was employed by the Frigidaire Division of General Motors in Detroit and Dayton, Ohio. In 1957 he returned to Ypsilanti and joined the staff of the Ypsilanti Credit Bureau that was founded by his father, Foster Fletcher, in 1924. Peter took over the ownership of the Bureau in 1969. Over the years Peter has held numerous political offices within Michigan and in the Republican Party. In 1975 he was named National GOP Committee Member and in 1976 he served as Gerald Ford’s Michigan Campaign Manager during the presidential campaign. In 1972 Fletcher was appointed Chairman of the Michigan State Highway Commission. In this position he controlled a budget of $5 billion and a work force of 4,300. Although he is well known for his many statewide contributions in this position, he will always be remembered for putting the fictitious towns of “Beat OSU” and “GoBlu” on the official highway map for the State of Michigan. Some of the many other positions held by Fletcher include: Trustee on the Board of Michigan State University, Ypsilanti Representative on the People’s Community Hospital Board, Treasurer and Board member of the Ypsilanti Players, Director of the Chamber of Commerce, Chair of the Chamber Citizens Advisory Committee on Urban Renewal, Director of the Rotary Club of Ypsilanti, Chair of the Ypsilanti Area Washtenaw County Cancer Crusade, Director of the Ypsilanti Community Chest, Director of the National Bank of Ann Arbor, Board Chairman for the First Methodist Church, Chair of the Washtenaw County Republican Committee, and many others too numerous to mention. Fletcher launched the “Fletcher Forum,” a group that now meets each Saturday morning at the VFW Hall on Michigan Avenue. The event draws city and county officials, attorneys, activists and others interested in local, state and national politics. The discussions are spirited but attendees walk out smiling and often meet after the sessions for breakfast. In 1995, Peter discussed with Jack Miller the history of some of the vehicles and dealership records that were part of Miller’s Hudson dealership. Peter told Jack, “We have to save this history!” Peter then talked to his longtime friend Paul W. Skip Ungrodt about starting an auto museum. In a matter of days, Peter, Skip and Jack met at the Sidetrack for lunch and shortly after a museum telling the automotive history of Ypsilanti was born. The next day, Peter told Jack to obtain the best price on the building next to the Hudson dealership and bind the deal with no more than $500. In less than a week, the building at 112 E. Cross Street along with the Hudson dealership building would become the Ypsilanti Automotive Museum. The Museum opened to the public at the 1995 Heritage Festival and featured Peter’s 1972 Rolls Royce, 1976 Cadillac, and 1979 Lincoln (1710 actual miles). Skip contributed his 1980 Avanti II and Jack added several of his Hudson automobiles. Peter often said “People do not realize America’s love affair with automobiles.” He was the founding chairman of the museum’s non-profit board and provided leadership until he passed away. Peter’s father, Foster Fletcher, helped found the Ypsilanti Historical Society in 1960 and served as the City Historian from 1963 to 1985. Foster Fletcher’s hard work at collecting, cataloging and preserving historical information and artifacts laid the foundation for the YHS Museum and Archives. The Fletcher/White Archives is named in his honor as a recognition of those efforts. Peter Fletcher was an avid reader and historical buff and impressed all those who knew him with his gift of language and oratorical skills. He will be missed by all those who had the pleasure and privilege of knowing him

Photo Caption 1. The YHS lost a great friend and benefactor with the passing of Peter Bacon Fletcher