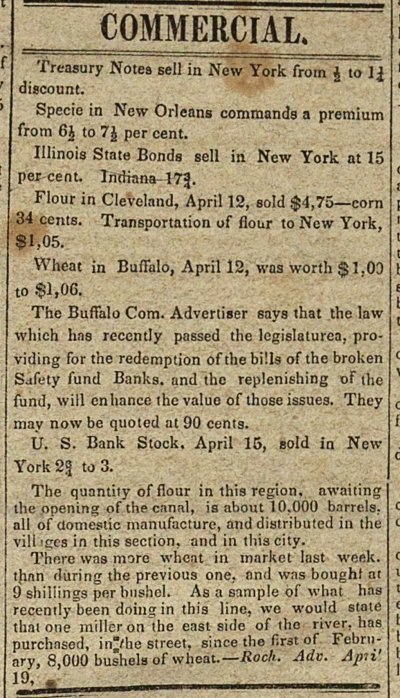 Treasury Notea sell in New York froin to 1 discount. Specie in New Orleans comrnands a premium from 64 to 7 per cent. Illinois State Bonds sell in New York at 15 percent. 17jj. Flour in Cleveland, April 12, sold $4,75- corn 34 cents. Transportation of flour to New York, $1,05. Wheat in BuflalÃ³, April 12, was worth $1.00 to $1,06. The Buffalo Com. Advertiser says that the law which has reccntly passed the lcgislaturca, providing for the redemption of thebÃ¼ls of the broken Safety fund Banks, and the replenishing of the fund, will cnhance the value of those issues. They may now be quoted at 90 cents. U. S. Bank Stock. April 15, sold in New York 2% to3. The quantity of flour in this regiÃ³n, awaiting the opening of the canal, is abont 10.000 barrels: all of dotnestic manufacture, and distributed in the vili 'tres in this section. and in this city. Thore was more wheat in inarket last week. than during the previous one. and was bought at 9 shiliings per bnshel. As a sample of what has recently been doing in this line, we would state that one millcron the east side of the river. has purchased, inhe street, since the first of