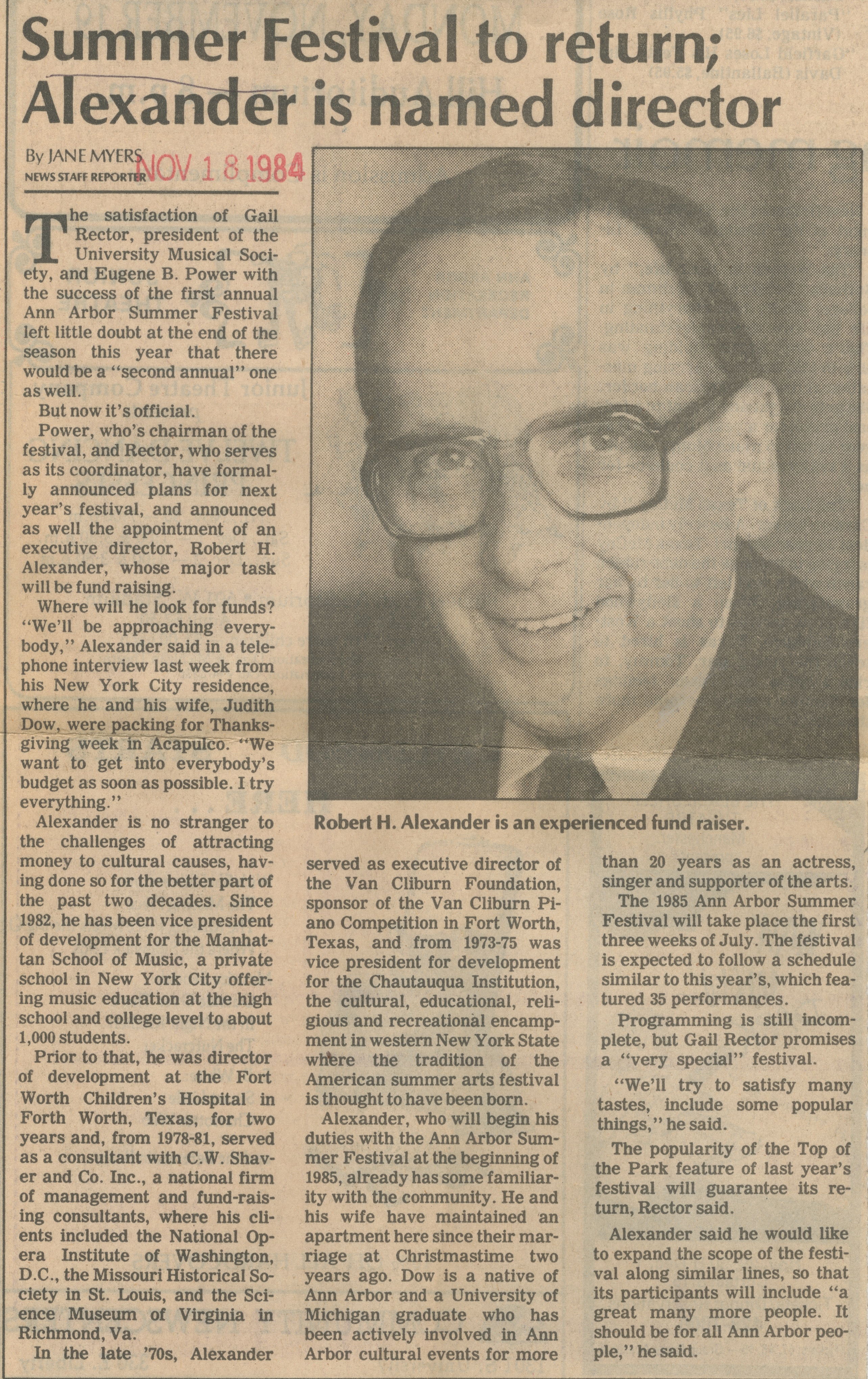 The satisfaction of Gail Rector, president of the University Musical Society, and Eugene B. Power with the success of the first annual Ann Arbor Summer Festival left little doubt at the end of the season this year that there would be a “second annual” one as well.

Power, who’s chairman of the festival, and Rector, who serves as its coordinator, have formally announced plans for next year’s festival, and announced as well the appointment of an executive director, Robert H. Alexander, whose major task will be fund raising.

Where will he look for funds? “We’ll be approaching everybody,” Alexander said in a telephone interview last week from his New York City residence, where he and his wife, Judith Dow. were packing for Thanksgiving week in Acapulco. "We want to get into everybody’s budget as soon as possible. I try everything.”

Alexander is no stranger to the challenges of attracting money to cultural causes, having done so for the better part of the past two decades. Since 1982, he has been vice president of development for the Manhattan School of Music, a private school in New York City offering music education at the high school and college level to about 1,000 students.

Prior to that, he was director of development at the Fort Worth Children’s Hospital in Forth Worth, Texas, for two years and, from 1978-81, served as a consultant with C.W. Shaver and Co. Inc., a national firm of management and fund-raising consultants, where his clients included the National Opera Institute of Washington, D.C., the Missouri Historical Society in St. Louis, and the Science Museum of Virginia in Richmond, Va.

In the late ’70s, Alexander served as executive director of the Van Cliburn Foundation, sponsor of the Van Cliburn Piano Competition in Fort Worth, Texas, and from 1973-75 was vice president for development for the Chautauqua Institution, the cultural, educational, religious and recreational encampment in western New York State wiitere the tradition of the American summer arts festival is thought to have been born.

Alexander, who will begin his duties with the Ann Arbor Summer Festival at the beginning of 1985, already has some familiarity with the community. He and his wife have maintained an apartment here since their marriage at Christmastime two years ago. Dow is a native of Ann Arbor and a University of Michigan graduate who has been actively involved in Ann Arbor cultural events for more than 20 years as an actress, singer and supporter of the arts.

The 1985 Ann Arbor Summer Festival will take place the first three weeks of July. The festival is expected to follow a schedule similar to this year’s, which featured 35 performances.

“We’ll try to satisfy many tastes, include some popular things,” he said.

The popularity of the Top of the Park feature of last year’s festival will guarantee its return, Rector said.

Alexander said he would like to expand the scope of the festival along similar lines, so that its participants will include “a great many more people. It should be for all Ann Arbor people,” he said.