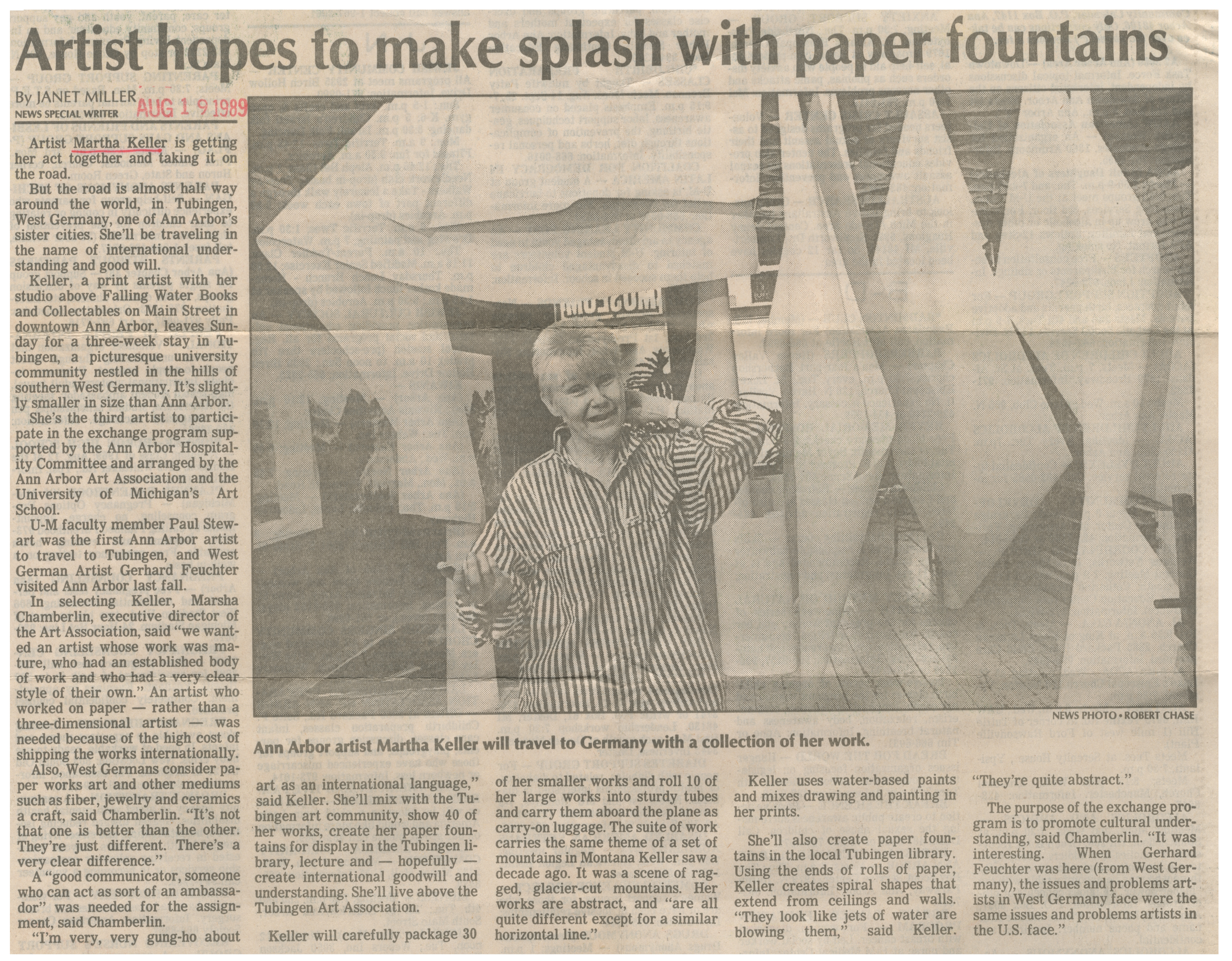 Artist Martha Keller is getting her act together and taking it on the road.

But the road is almost half way around the world, in Tubingen, West Germany, one of Ann Arbor’s sister cities. She’ll be traveling in the name of international understanding and good will.

Keller, a print artist with her studio above Falling Water Books and Collectables on Main Street in downtown Ann Arbor, leaves Sunday for a three-week stay in Tubingen, a picturesque university community nestled in the hills of southern West Germany. It’s slightly smaller in size than Ann Arbor.

In selecting Keller, Marsha Chamberlin, executive director of the Art Association, said “we wanted an artist whose work was mature, who had an established body of work and who had a very clear style of their own.” An artist who worked on paper — rather than a three-dimensional artist — was needed because of the high cost of shipping the works internationally.

Also, West Germans consider paper works art and other mediums such as fiber, jewelry and ceramics a craft, said Chamberlin. “It’s not that one is better than the other. They’re just different. There’s a very clear difference.”

A “good communicator, someone who can act as sort of an ambassador” was needed for the assignment, said Chamberlin.

“I’m very, very gung-ho about art as an international language,” said Keller. She’ll mix with the Tubingen art community, show 40 of her works, create her paper fountains for display in the Tubingen library, lecture and — hopefully — create international goodwill and understanding. She’ll live above the Tubingen Art Association.

Keller will carefully package 30 of her smaller works and roll 10 of her large works into sturdy tubes and carry them aboard the plane as carry-on luggage. The suite of work carries the same theme of a set of mountains in Montana Keller saw a decade ago. It was a scene of ragged, glacier-cut mountains. Her works are abstract, and “are all quite different except for a similar horizontal line.”

Keller uses water-based paints and mixes drawing and painting in her prints.

She’ll also create paper fountains in the local Tubingen library. Using the ends of rolls of paper, Keller creates spiral shapes that extend from ceilings and walls. “They look like jets of water are blowing them,” said Keller.

Ann Arbor artist Martha Keller will travel to Germany with a collection of her work.
NEWS PHOTO • ROBERT CHASE