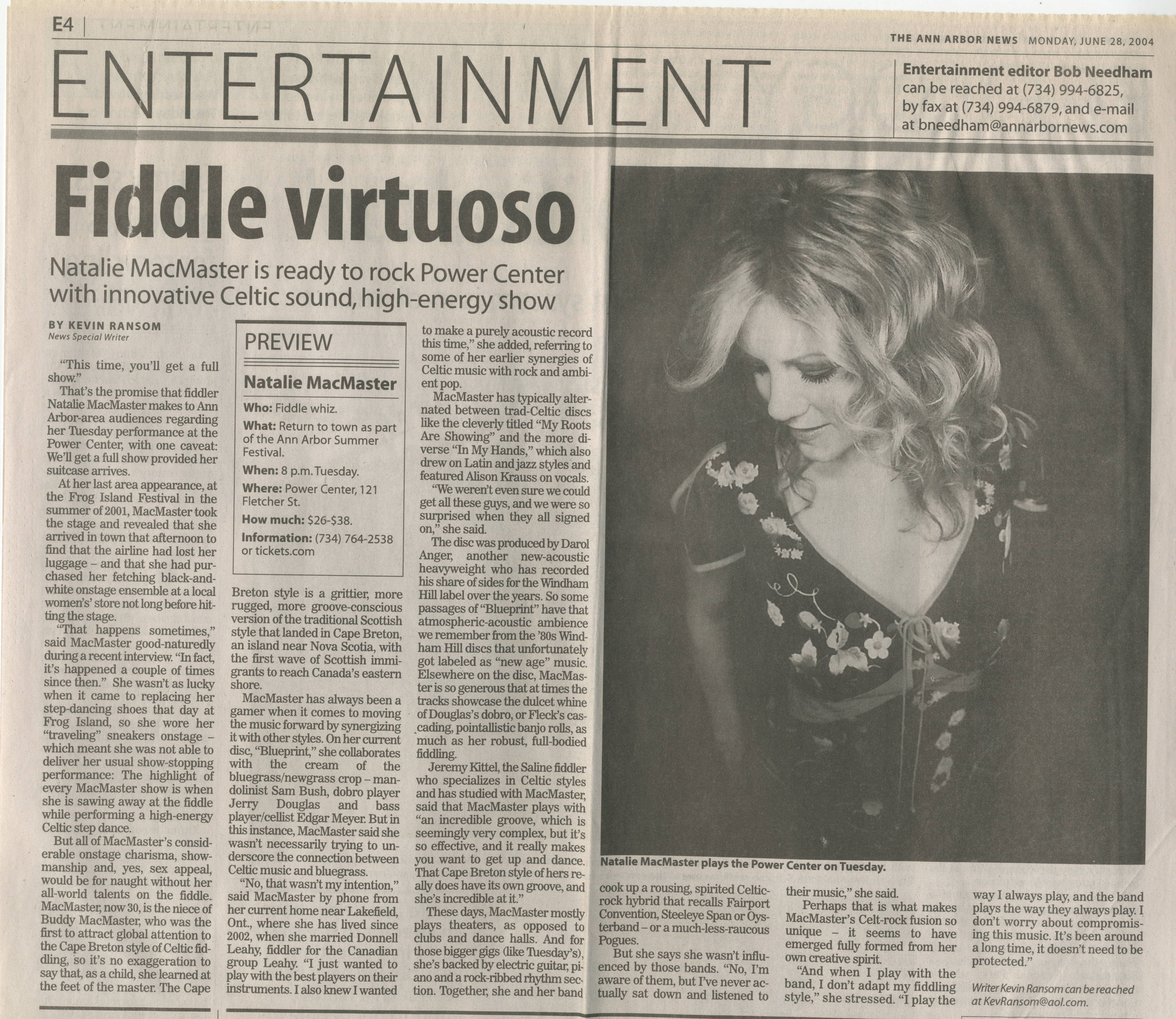 What: Return to town as part of the Ann Arbor Summer Festival.

That’s the promise that fiddler Natalie MacMaster makes to Ann Arbor-area audiences regarding her Tuesday performance at the Power Center, with one caveat: We’ll get a full show provided her suitcase arrives.

At her last area appearance, at the Frog Island Festival in the summer of 2001, MacMaster took the stage and revealed that she arrived in town that afternoon to find that the airline had lost her luggage - and that she had purchased her fetching black-and-white onstage ensemble at a local women’s’ store not long before hitting the stage.

“That happens sometimes,” said MacMaster good-naturedly during a recent interview. “In fact, it’s happened a couple of times since then.” She wasn’t as lucky when it came to replacing her step-dancing shoes that day at Frog Island, so she wore her “traveling” sneakers onstage -which meant she was not able to deliver her usual show-stopping performance: The highlight of every MacMaster show is when she is sawing away at the fiddle while performing a high-energy Celtic step dance.

But all of MacMaster’s considerable onstage charisma, showmanship and, yes, sex appeal, would be for naught without her all-world talents on the fiddle. MacMaster, now 30, is the niece of Buddy MacMaster, who was the first to attract global attention to the Cape Breton style of Celtic fiddling, so it’s no exaggeration to say that, as a child, she learned at the feet of the master. The Cape Breton style is a grittier, more rugged, more groove-conscious version of the traditional Scottish style that landed in Cape Breton, an island near Nova Scotia, with the first wave of Scottish immigrants to reach Canada’s eastern shore.

MacMaster has always been a gamer when it comes to moving the music forward by synergizing it with other styles. On her current disc, “Blueprint,” she collaborates with the cream of the bluegrass/newgrass crop - mandolinist Sam Bush, dobro player Jerry Douglas and bass player/cellist Edgar Meyer. But in this instance, MacMaster said she wasn’t necessarily trying to underscore the connection between Celtic music and bluegrass.

“No, that wasn’t my intention,” said MacMaster by phone from her current home near Lakefield, Ont., where she has lived since 2002, when she married Donnell Leahy, fiddler for the Canadian group Leahy. “I just wanted to play with the best players on their instruments. I also knew I wanted to make a purely acoustic record this time,” she added, referring to some of her earlier synergies of Celtic music with rock and ambient pop.

MacMaster has typically alternated between trad-Celtic discs like the cleverly titled “My Roots Are Showing” and the more diverse “In My Hands,” which also drew on Latin and jazz styles and featured Alison Krauss on vocals.

“We weren’t even sure we could get all these guys, and we were so surprised when they all signed on,” she said.

The disc was produced by Darol Anger, another new-acoustic heavyweight who has recorded his share of sides for the Windham Hill label over the years. So some passages of “Blueprint” have that atmospheric-acoustic ambience we remember from the ’80s Windham Hill discs that unfortunately got labeled as “new age” music. Elsewhere on the disc, MacMaster is so generous that at times the tracks showcase the dulcet whine of Douglas’s dobro, or Fleck’s cascading, pointallistic banjo rolls, as much as her robust, foll-bodied fiddling.

Jeremy Kittel, the Saline fiddler who specializes in Celtic styles and has studied with MacMaster, said that MacMaster plays with “an incredible groove, which is seemingly very complex, but it’s so effective, and it really makes you want to get up and dance. That Cape Breton style of hers really does have its own groove, and she’s incredible at it.”

These days, MacMaster mostly plays theaters, as opposed to clubs and dance halls. And for those bigger gigs (like Tuesday's), she’s backed by electric guitar, piano and a rock-ribbed rhythm section. Together, she and her band cook up a rousing, spirited Celtic-rock hybrid that recalls Fairport Convention, Steeleye Span or Oysterband - or a much-less-raucous Pogues.

But she says she wasn’t influenced by those bands. “No, I’m aware of them, but I’ve never actually sat down and listened to their music,” she said.

Perhaps that is what makes MacMaster’s Celt-rock fusion so unique - it seems to have emerged fully formed from her own creative spirit “And when I play with the band, I don’t adapt my fiddling style,” she stressed. “I play the way I always play, and the band plays the way they always play. I don’t worry about compromising this music. It’s been around a long time, it doesn’t need to be protected.”

Writer Kevin Ransom can be reached at KevRansom@aol.com.