Hawaiian music to ripple out at Power Center 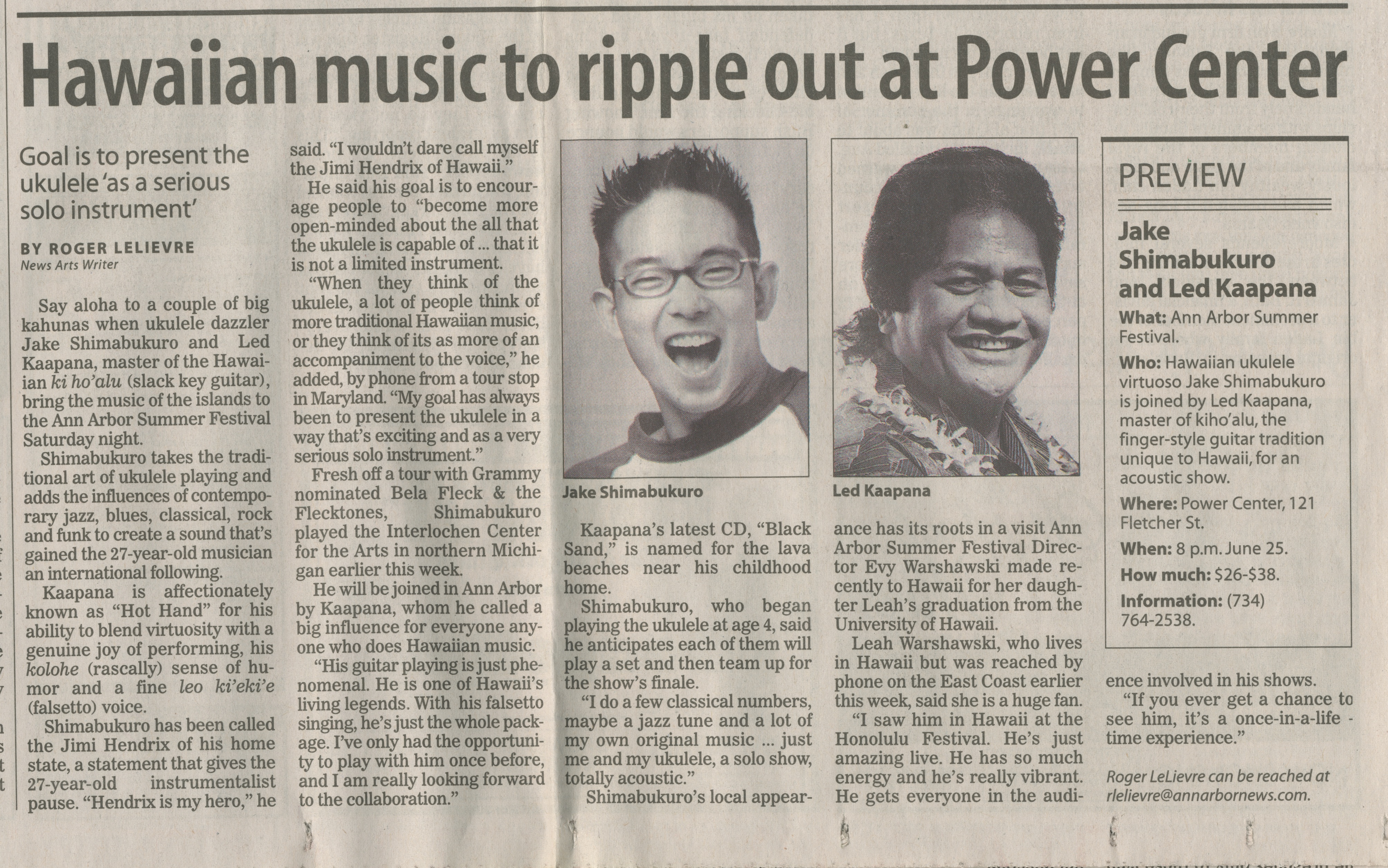 ﻿Hawaiian music to ripple out at Power Center

Goal is to present the ukulele'as a serious solo instrument'

Say aloha to a couple of big kahunas when ukulele dazzler Jake Shimabukuro and Led Kaapana, master of the Hawaiian ki ho’alu (slack key guitar), bring the music of the islands to the Ann Arbor Summer Festival Saturday night.

Shimabukuro takes the traditional art of ukulele playing and adds the influences of contemporary jazz, blues, classical, rock and funk to create a sound that’s gained the 27-year-old musician an international following.

Kaapana is affectionately known as “Hot Hand” for his ability to blend virtuosity with a genuine joy of performing, his kolohe (rascally) sense of humor and a fine leo ki’eki’e (falsetto) voice.

1 Shimabukuro has been called > the Jimi Hendrix of his home state, a statement that gives the 27-year-old instrumentalist pause. “Hendrix is my hero,” he

said. “I wouldn’t dare call myself the Jimi Hendrix of Hawaii.”

He said his goal is to encourage people to “become more open-minded about the all that the ukulele is capable of... that it is not a limited instrument.

“When they think of the ukulele, a lot of people think of more traditional Hawaiian music, or they think of its as more of an accompaniment to the voice,” he added, by phone from a tour stop in Maryland. “My goal has always been to present the ukulele in a way that’s exciting and as a very serious solo instrument.”

Fresh off a tour with Grammy nominated Bela Fleck & the Flecktones, Shimabukuro played the Interlochen Center for the Arts in northern Michigan earlier this week.

He will be joined in Ann Arbor by Kaapana, whom he called a big influence for everyone anyone who does Hawaiian music.

“His guitar playing is just phenomenal. He is one of Hawaii’s living legends. With his falsetto singing, he’s just the whole package. I’ve only had the opportunity to play with him once before, and I am really looking forward to the collaboration.”

Kaapana’s latest CD, “Black Sand,” is named for the lava beaches near his childhood home.

Shimabukuro, who began playing the ukulele at age 4, said he anticipates each of them will play a set and then team up for the show’s finale.

“I do a few classical numbers, maybe a jazz tune and a lot of my own original music ... just me and my ukulele, a solo show, "totally acoustic.”

Shimabukuro’s local appearance has its roots in a visit Ann Arbor Summer Festival Director Evy Warshawski made recently to Hawaii for her daughter Leah’s graduation from the University of Hawaii.

Leah Warshawski, who lives in Hawaii but was reached by phone on the East Coast earlier this week, said she is a huge fan.

“I saw him in Hawaii at the Honolulu Festival. He’s just amazing live. He has so much energy and he’s really vibrant. He gets everyone in the audience involved in his shows.

"If you ever get a chance to see him, it's a once-in-a-lifetime experience."

Who: Hawaiian ukulele virtuoso Jake Shimabukuro is joined by Led Kaapana, master of kiho'alu, the finger-style guitar tradition unique to Hawaii, for an acoustic show.

Roger LeLievre can be reached at rlelievre@annarbornews.com.